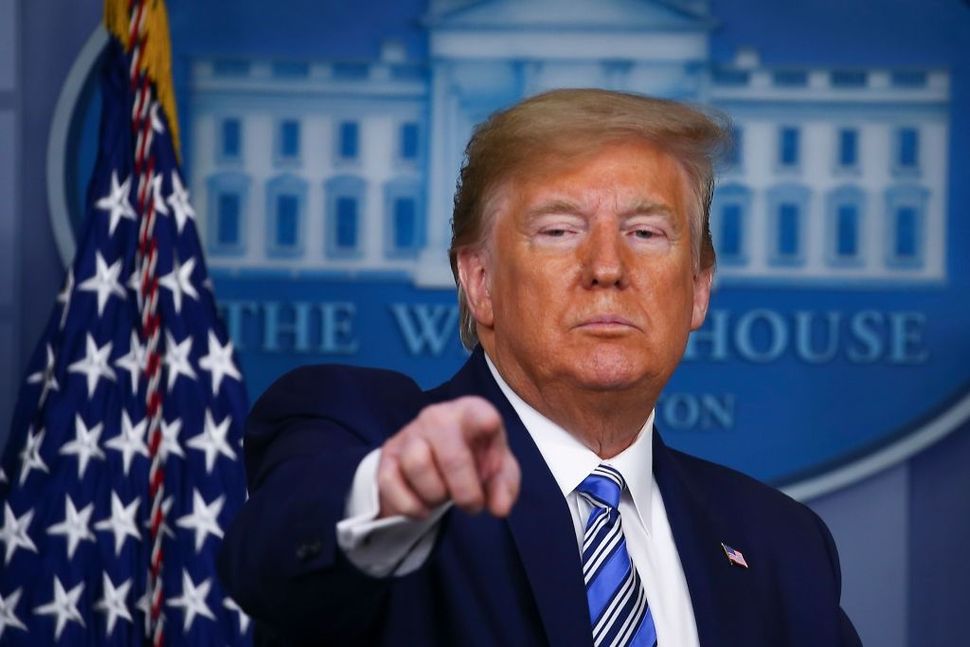 When President Trump uses the phrase “invisible enemy” to describe the coronavirus, he is using the vocabulary of medieval libels against Jews.

Once we OPEN UP OUR GREAT COUNTRY, and it will be sooner rather than later, the horror of the Invisible Enemy, except for those that sadly lost a family member or friend, must be quickly forgotten. Our Economy will BOOM, perhaps like never before!!!

While it may seem like we are in 2020 and not in 1348, this rhetoric about the “invisible enemy” has been heard loud and clear—by protesters outside the Columbus, Ohio statehouse this weekend holding signs depicting Jews as rats who are the “real plague,” and by the man who tried to blow up a Jewish nursing home in Massachusetts.

There is no other way to say it; just like “America First,” the phrase “invisible enemy” has an ugly history that is now being revived and exploited at the kind of moment when such ugliness thrives—when everyone is scared for their lives and their basic survival.

The idea that “someone” is “secretly” trying to destroy you in a way you cannot see — poisoning your wells, for instance, as Jews were falsely accused of doing during the Black Death—has now morphed into the idea that the coronavirus is a secret plan by “others” to destroy freedom.

Sound familiar? Sound like something previously published and distributed by Henry Ford?

“The Protocols of the Elders of Zion” claims to describe how Jews invisibly control the world. It’s supposed to be the “proof” of this “invisible enemy” idea.

“If ever a piece of writing could produce mass hatred, it is this one,” Elie Wiesel said. “This book is about lies and slander.”

The phrase “lies and slander” certainly describes what we are hearing on a daily basis from the President, from his “assurances” on the virus’s disappearance to his attacks on Dr. Anthony Fauci to his repeated invocation of the role of an Invisible Enemy — in his capitalization.

But listen closely: the key element of the “Protocols” which can be heard now is the idea of secrecy, or in Trump’s parlance, “invisibility.”

Here is how the U.S. Holocaust Museum explains that aspect of the Protocols:

“In 24 chapters, or protocols, allegedly minutes from meetings of Jewish leaders, the Protocols “describes” the “secret plans” of Jews to rule the world by manipulating the economy, controlling the media, and fostering religious conflict,” the US Holocaust Museum explains on its website.

Fortunately, the ratcheting-up of the “invisible enemy” rhetoric by the President has been met with a swift response by editorial writers and anti-Semitism watchers who recognize historical strains of hatred when they see it. The Anti-Defamation League’s deputy national director, Ken Jacobson, immediately responded to Trump’s language with a detailed editorial on the connection between the phrase “invisible enemy” and centuries of dangerous anti-Semitic rhetoric focused on this idea of “secrecy”:

“The desecration of the Host accusation, the charge that Jews were secretly destroying the Christian religious ceremony, hence “killing Christ” all over again, was a product of this thinking,” Jacobson wrote, as he parsed the “invisible enemy” line.

And The Chicago Sun-Times ran a scathing piece with this eye-catching headline: “Donald Trump is the virus: His coronavirus response confirms how toxic he is for our nation.”

The President’s conspiracy theories in a time of national emergency are specifically endangering public health, S.E. Cupp of The Chicago Sun-Times explained.

Representative Tom Cole of Oklahoma, deputy whip of the Republican conference, for instance, has “invisible enemy” on his website statement about the virus.

This week, in only 4 days, we had the biggest Stock Market increase since 1974. We have a great chance for the really big bounce when the Invisible Enemy is gone!

This is another old canard that has led to bloodshed—the idea that the “invisible enemy” is the reason for your financial problems.

And of course, it sounds like a lift from the “Protocols of the Elders of Zion,” with its false assertion of secret Jewish global domination of the financial system.

While it has been disgusting enough to observe Trump blaming “foreigners” for the virus, he’s clearly setting the stage for blaming the economic collapse—a slowdown clearly caused by the shelter-at-home order required for public health—on the “enemy” too.

As the stock market seesaws, we should remember that the connection between “invisible enemy” and financial health is potentially as dangerous as this President’s shameful and repeated attempt to tie “foreigners” with physical health—which has resulted in attacks against Asian Americans and attempted murder of Jewish nursing-home residents.

It may be easy to dismiss those attacks as the behavior of “lone” individuals.

But as Elie Wiesel warns us, “mass hatred” is the deep danger, and one that is never as far away as history may make it seem.

With a president whose rhetoric has infected too many with lies and slander, from “protesters” to lawmakers, we can never be vigilant enough about mass hatred.

It is and has always been the most murderous infection.