The Joan of Arc of Irish sex — and her Jewish acolytes 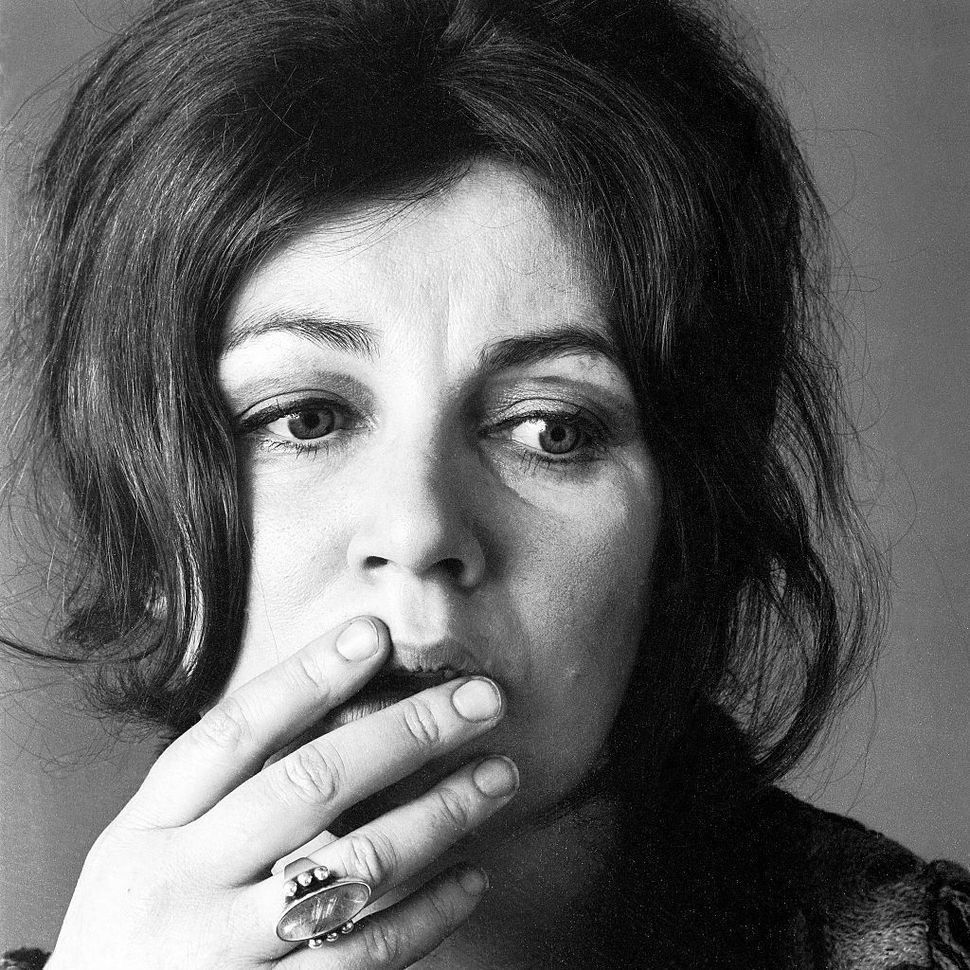 In mid-April, The Irish Times alerted its readership to an “astonishing hatchet job” of a national icon, the novelist Edna O’Brien. The offending article, a condescending and nit-picking profile, had appeared some months before in The New Yorker, but took some time for its venom to percolate as far as Europe.

O’Brien, who will be 90 in December and is still writing despite being diagnosed with cancer over a year ago, was the subject of a more respectful recent study by the Irish literary scholar Dan O’Brien (no relation) examining her literary friendships with a number of preeminent Jewish writers.

As O’Brien’s memoirs explain, her trajectory was influenced by Yiddishkeit from the start. As a trainee pharmacist in her early twenties, she met Ernest Gébler (1914–1998) an Irish writer of Czech Jewish origin. Gébler, author of “The Plymouth Adventure,” which was made into a Hollywood film starring Spencer Tracy already had some literary renown.

As their son Carlo later described in a biography and memoir, Gébler would harangue his family at mealtimes by reading from “The Culture of the Abdomen” a grim opus about digestion by an Irish disciple of the German Jewish bodybuilder Eugen Sandow.

Although “The Culture of the Abdomen” was generally considered ludicrous by the 1930s, spoofed by British humourists such as A. P. Herbert, Gébler took it all too seriously, as he did his wife’s sudden literary fame when her novel “The Country Girls” shocked her compatriots with its overt sensuality.

A divorce ensued, but O’Brien continued to be drawn to older Jewish literary mentors. Her first memoir, “Mother Ireland”, deliberately reverses Ireland’s tendency to render its Jews invisible. A character in “Mother Ireland” states this policy of estrangement:

“The Jew man was shunned as were the gypsies and the hawkers, all bringing upon themselves unvoiced odium, which was mysteriously connected with sex and connected with the fact they had sallow skin and quivering nostrils. Furriers were Jews, jewelers were Jews, and they were not above taking the precious jewels out of your watch or the best strips of fur and replacing it with counterfeit. There had been a pogrom in Limerick half a century before and a redemptionist priest told the faithful to stone the moneylenders which they did.”

In the background of O’Brien’s advocacy was Ireland’s neutral status during World War II, during which its leader Éamon de Valera even signed the condolence book after Adolf Hitler’s death in May 1945 and personally visited the Nazi ambassador in Ireland to convey his regrets. De Valera also dismissed reports of Bergen-Belsen concentration camp as “anti-national propaganda.”

Opposing this fondness for Nazis, O’Brien prized European Jewish culture and saw the Irish and Jews as reflecting parallel experiences of persecution and diaspora. In turn, she began to receive fan letters from American Jewish literary notables, such as a May 1962 missive from Joseph Heller, author of “Catch 22,” who lauded her latest book, “The Lonely Girl,” as “a beautiful, sincere, and refreshing novel.”

Saul Bellow was another admirer. He met O’Brien at a New York party in 1965 and wrote her an affectionate note in December of that year, possibly expressing a measure of desire while explaining that he had returned to writing to “become more nearly” himself: “There seems to be only one significant thing for me – for the likes of us – and it hasn’t a great deal to do with parties. I took a great liking to you. I think you are a lovely woman.”

That Mrs. Roth, the English Jewish actress Claire Bloom did imitations of the vividly theatrical O’Brien does not diminish the obvious admiration and affection felt for her in her circle of American Jewish friends.

In 1969, O’Brien had met Roth, then in the throes of controversy surrounding his novel “Portnoy’s Complaint.” Although no romance ensued, Roth was aware of O’Brien’s physical presence, akin to the Hollywood star Maureen O’Hara’s, even as the years advanced. He alluded to it in a November 1984 “The New York Times” interview with O’Brien, addressing the reader: “You cannot, of course, miss the white skin, the green eyes and the auburn hair; the coloring is dramatically Irish – as is the mellifluous fluency.”

In the same year, Roth penned a preface to O’Brien’s 1984 short story collection “A Fanatic Heart,” noting that O’Brien was celebrated for love stories, “but her range is wider than that and there is an acute, sometimes searing, social awareness.”

This perceptive comment was echoed by yet another fan, the Yiddish author Isaac Bashevis Singer, who wrote to O’Brien in October 1972 to praise her novel “A Pagan Place”: “I think we both have in common the fact that we are rooted in the soil and culture of our people. Most of modern writers are rootless and they consider it being ‘cosmopolitan.’”

Her most powerful literary influence among American Jewish writers may have been Saul Bellow, whose novel “Herzog” (1964) is about an American Jewish academic who composes letters in his head, never to be sent. O’Brien’s 1966 novel “Casualties of Peace” likewise contains an obsessive epistolary theme.

More than just the “Joan of Arc of Irish sex,” O’Brien was deeply interested in the real-life Maid of Orléans who fought in the Hundred Years’ War and became a Catholic saint. Still another American Jewish literary ally, Norman Mailer, offered opinions on Joan of Arc for a project O’Brien considered before ultimately abandoning.

Mailer himself published a novella, “Trial of the Warlock,” in the form of a film treatment inspired by the French writer Joris-Karl Huysmans, which appeared in the December 1976 issue of Playboy Magazine,) never to be reprinted. Mailer discusses Joan of Arc from the perspective of her second-in-command Gilles de Rais, who became a notorious serial killer, supposedly inspiring the French folktale “Bluebeard.”

Undaunted by any Bluebeard-like reputations among fractious literati, O’Brien was even on friendly terms with the unaccommodating J.D. Salinger. His “Catcher in the Rye” influenced her “Country Girls Trilogy,” which like “Catcher’s” protagonist Holden Caulfield, was outspoken against “phonies.”

As recently as August 2019, O’Brien reminded The Observer, “I can’t bear phonies. I want integrity.” This quest for authenticity led O’Brien in her late eighties to make two gruelling research trips to Africa to prepare a novel, “Girl” about schoolgirls kidnapped and sexually abused by the jihadist group Boko Haram in Nigeria.

The Joan of Arc of Irish sex — and her Jewish acolytes