With COVID-19 raging in New York, a klezmer-tinged fanfare for the essential worker 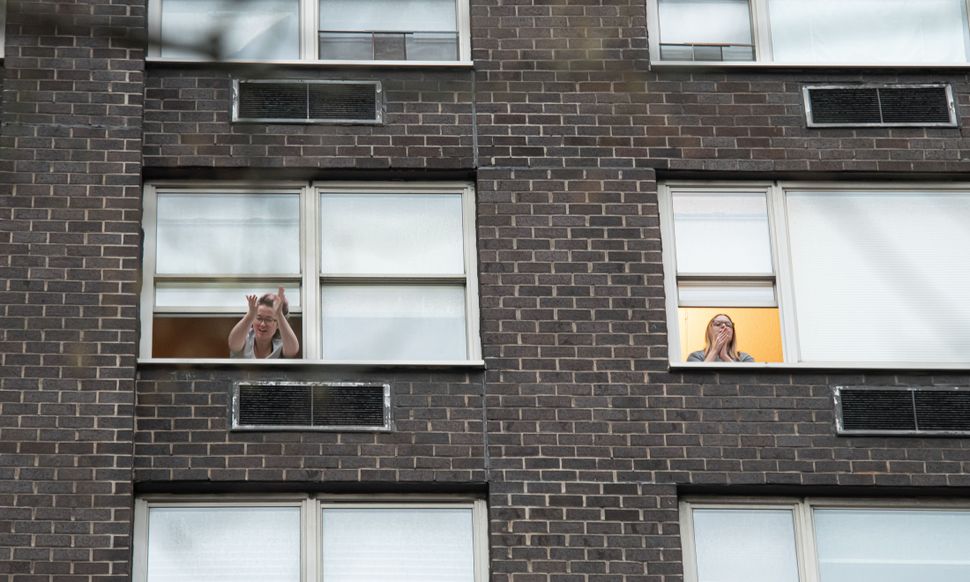 From his rooftop on the Lower East Side, Grammy-winning composer and trumpeter Frank London has been hearing the nightly 7:00 PM calls of gratitude for New York City’s healthcare, food service and transit personnel working through the coronavirus pandemic. Now, he’s enriching the ritual by composing a fanfare for the essential worker for winds, strings and even cookware.

On Wednesday, April 29 at 7:00 PM, musicians and non-musicians from all five boroughs of New York City will debut the new symphonic composition, “For Our Courageous Workers” by London and Hajnal Pivnick and Dorian Wallace of the group Tenth Intervention.

“The idea came about because people were saying it really meant something to them — the people out there working,” London said of the daily cheers. “They’re risking their health and, depending on what kind of work they’re doing, encountering incredible tragedy and pain. And it makes a difference.”

It took 10 days for London and his co-composers to conceive of, write and begin a media campaign for the 11-minute piece in four movements that can be easily played by anyone from “a three-year-old Suzuki player” to “a philharmonic player” and allows those who are already celebrating workers from their windows to meld seamlessly into a rich soundscape. The score for the piece takes the form of simple instructions on a flyer that the composers’ partners and PR groups are disseminating broadly.

“The crisis is not over so something like what we’re doing on Wednesday will give it a push; it’ll give some energy to that thing,” London said, also noting that the piece presents a rare opportunity for musicians shuttered up at home to perform on a symphonic scale.

Broken up by sections, the fanfare instructs wind players to begin the first movement, “Cheering,” with a B flat chord — a note the city is said to hum in — while string players play the open strings of A and D and pianists arpeggiate a B flat major chord and percussionists roll their cymbals.

The second movement, “Reflecting,” is a ruminative section tuned to D minor — which, London, co-founder of the Klezmatics, notes is the “universal key of klezmer,” The piece then transitions into “Catharsis,” a freestyle opportunity to thrash about and express frustration and anger at being cooped up. Non-musicians are encouraged to clap, cheer and bang on their pots and pans.

“Can you imagine the sound of thousands of people going just insane sonically?” London asked.

But up until this point, the piece has relied on just that — imagination. There are no dress rehearsals for an event like this, but London, Pivnick and Wallace are confident that their format is widely adaptable and easy to play through.

“We’re using clock time as our score, not metronomic time, not rhythm,” London said. “At 7:03 something happens. At 7:06 something happens. In that sense, that’ll work. There’s two possibilities: the one possibility is the person doing it can hear someone else doing it somewhere near them. The other possibility is they can’t. It works either way. You can do it by yourself or you can do it if you hear other things happening.”

London is asking those who are taking part to post video with the hashtag #PlayBecauseWeCare and #ClapBecauseWeCare.

“We’re going to try to collect all these different videos, so even if you’re in the middle of Staten Island and you can’t hear someone else, by putting it together you’ll have a sense of how the whole piece works musically,” London said.

With co-sponsors like Jazz at Lincoln Center, City Winery and Yiddish New York, the instructions for the piece are expected to reach thousands. The performance is expected to end around 7:11, resolving once more in the key of the city and “Aaahs” of gratitude for those who keep it running.

More information on how to participate in the citywide fanfare can be found here.

With COVID-19 raging in New York, a klezmer-tinged fanfare for the essential worker