Did Pope Pius XII lie to the U.S. government about the Holocaust? 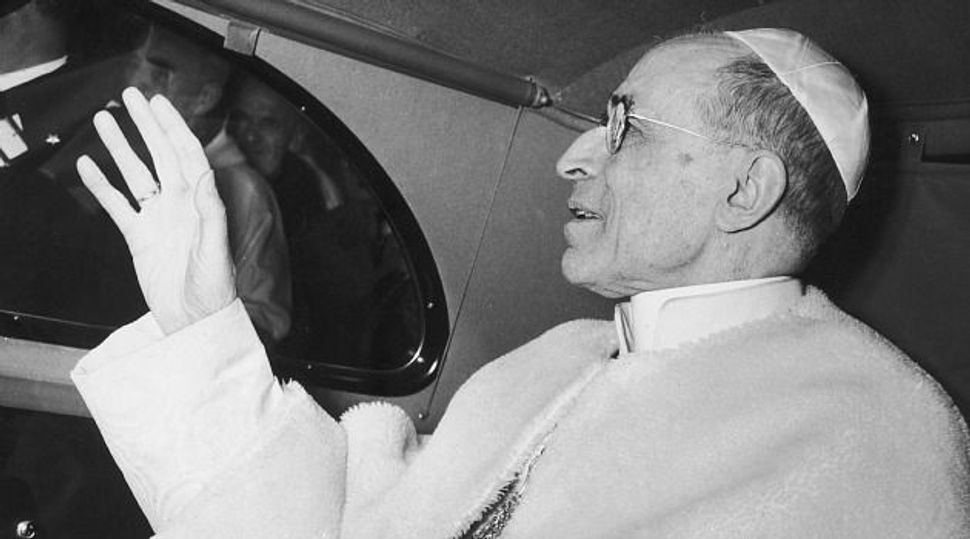 Controversial: Pope Pius XII is on a path to sainthood despite lingering concerns about his role during the Holocaust. Image by getty images

Last month, the Vatican admitted a select group of scholars to review Pope Pius XII’s papers for the first time ever. The researchers came to address a central question of Pius’ legacy: Why did the pontiff, who led the Catholic Church during World War II, appear to remain silent as the Nazis slaughtered Europe’s Jewry?

In a series of new reports, a research team from Germany’s University of Münster claims to have found archival evidence that Pius did more than just stay silent — he withheld information and so did the custodians of his image.

Letters, photographs from concentration camps and a note on U.S. intelligence indicate that Pius may have made a calculated decision to discount evidence of the Holocaust, Religion News Service reports. According to the German research team —who managed to access the archives for a week before they closed due to the coronavirus pandemic —- an American diplomat presented the Vatican with a report in September of 1942 that detailed the massacres of thousands in the Warsaw ghetto and Lviv, Ukraine. The U.S. government hoped to check the report, grounded in intelligence from the Geneva office of the Jewish Agency for Palestine, against the Vatican’s own network of information from Catholic communities in Europe.

A note found in the archive indicates that Pius read the report, but the Vatican refused to confirm its findings, despite the fact that Pius appears to have had information corroborating its claims from a month before.

A letter to Pius from Andrey Sheptytsky, a Ukrainian archbishop in Lviv, mentioned the murder of 200,000 Jews at the hands of the Germans as part of the “outright diabolical” occupation. But his letter was not the only evidence available to Pius. According to the researchers, days before the American diplomat approached the Vatican, its secretary of state, Cardinal Luigi Maglione, received news from the future Pope Paul VI of the “incredible butchery” of Jews in Warsaw.

But these reports were dismissed for an ugly reason, according to the German team leader, Hubert Wolf, a priest and historian of the Catholic Church. Wolf told the Hamburg paper Die Zeit that his team found a memo from a staff member of the Secretariat of State arguing that the report from the Jewish Agency was not to be taken at face value as Jews “easily exaggerate.” As for the report from the Ukrainian bishop, the staffer contended “Orientals are really not an example of honesty.”

The reasoning in this memo, Wolf claimed, guided the Vatican’s decision to refrain from confirming the U.S. report.

The memo had not been disclosed before the researchers found it early last month. It was notably absent from the 11-volume series of documents, “Actes et Documents,” published by the Vatican between 1965 and 1981 to absolve Pius of claims of complicity in Nazi war crimes.

“This is a key document that has been kept hidden from us because it is clearly anti-Semitic and shows why Pius XII did not speak out against the Holocaust,” Wolf told Kirche + Leben, Münster’s Catholic weekly. Wolf also discovered three photographs of concentration camp inmates and bodies in a mass grave that a Vatican ambassador received from a Jewish informer along with a confirmation that the images had been received. Defenders of Pius have long held that the pontiff in fact was a quiet advocate of the Jews and was himself preoccupied in defending Catholics from the persecution of the Nazis.

Many more questions remain about the archive’s contents and what the Holy See knew. Researchers from Israel and American did not visit the archives as planned due to the pandemic, Religion News Services reports, making the German group the first to publish its findings.

In April, David Kertzer, an American scholar invited to the archive, told CBC radio that he hoped to find out what discussions were held prior to the night of October 16. 1943, when a thousand Jews were held by German forces next to the Vatican.

“The pope knew what was going on and obviously was not happy,” Kertzer said. “But he had to decide whether to take any dramatic action to try to prevent the Jews’ deportation to Auschwitz and their death. And he decided not, in fact, to intervene.”

Did Pope Pius XII lie to the U.S. government about the Holocaust?