What is it with Jewish guys like Jerry Krause and basketball? 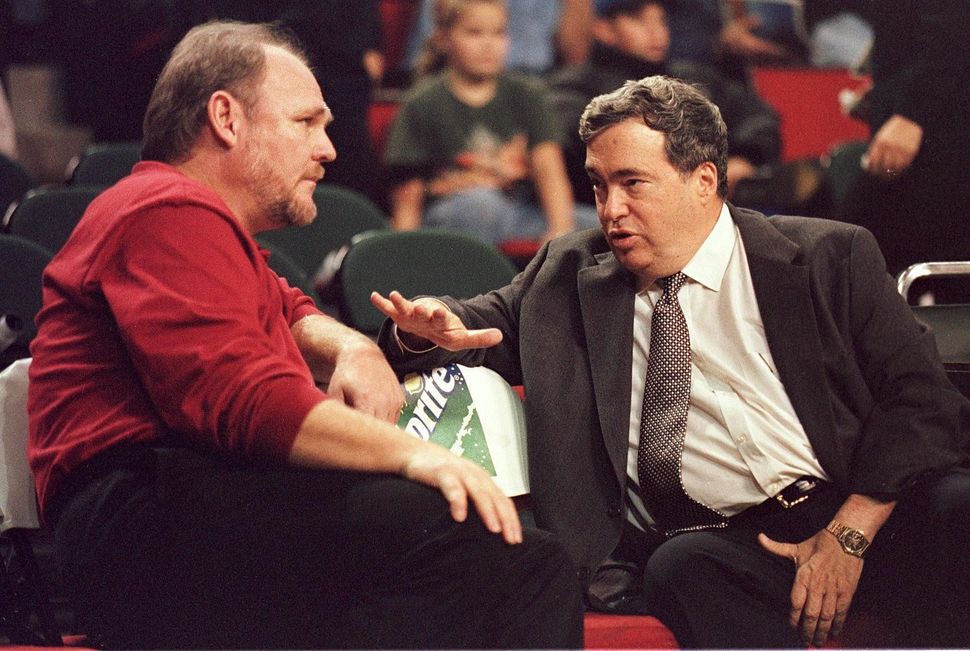 In the fourth episode of ESPN’s “The Last Dance,” after the Chicago Bulls’ climactic May 1991 victory over the “Bad Boys” Pistons, Bulls’ general manager Jerry Krause is shown dancing to Kool Moe Dee.

Trailing Scottie Pippen on the aisle of the team’s jet, he looks — and is — remarkably square, simpering in his short-sleeved dress shirt and tie as he tries to match the not-so-small small forward’s hip thrusts while clutching a red Solo cup. The team cries “Go Jerry!” But after a botched attempt at the Running Man, Pippen issues an edict: “Go sit down, Jerry.”

It’s but a sample of the grudges to come. If there is a villain in the championship team’s final days it’s Krause, who died in 2017 and who is, some have noted, a narratively convenient straw man. He’s something else too: A perennial outsider who can’t find his way in.

As former Bulls point guard Steve Kerr, now coach of the Golden State Warriors, observed in episode two, Krause “deserves a lot of credit. But he couldn’t get out of his own way.”

Krause is credited with creating the star lineup that gave the Bulls six NBA titles, but he caught flack for insisting that the 1997-98 season would be the last one with beloved coach Phil Jackson. His plans for a change-up had sweeping implications for Chicago’s most decorated players — Michael Jordan, Dennis Rodman and Pippen.

One could forgive Krause for wanting to rebuild an aging team. The formula he had established had worked for a time, but his success came from being as bold in his management style as Jordan was at the backboard, as disruptive as Rodman was to team order, as prideful as Pippen was when it came to dollars and cents. Krause’s problem was one of optics.

The portly Chicago native with a puckered face insisted on making his most controversial maneuvers a matter of public record. He spoke with the press about trading Pippen, announced the decision to let Jackson go after ‘98 during the All Star break and — when Jordan stated he wouldn’t play under another coach — went on the record to say “that’s his choice, not ours.”

The talk of ousting Pippen earned him the player’s abuse on the team bus. Jordan, who distrusted Krause since his sophomore season, was done with him and the team after Jackson’s fate was made clear. Krause’s desire to broadcast his plans far and wide made him enemies where the antics of Dennis Rodman only made the eccentric player more popular. Krause’s mistake was in thinking his star could shine as bright as the stars he helped make.

“Jerry had the little man problem,” Mark Vancil, co-author of “Chicago Bulls: Portrait of an Era,” said in the first episode. “He grew up a little, fat kid, not a lot of money. He was always the underdog. And he just couldn’t control that part of him that needed credit.”

“He had a way of alienating people,” Bulls owner Jerry Reinsdorf conceded, “But I wasn’t hiring somebody to win a personality contest.”

Krause never would, and, it goes without saying, he could never have been an athlete.

Watching Krause or Reinsdorf or former NBA commissioner David Stern, one can’t help but recall the question posed in “Uncut Gems,” which, paraphrased and sanitized, is “what is it with you Jews and basketball anyway?”

There is an undeniable relationship, but even if Howard Ratner cites the stats of Knicks player Ossie Schectman (the first man to score points in the NBA), Jews are overwhelmingly found in management positions now. They exist inside the organization, part of the sport they love, but rarely among those on the court. That disconnect can lead to ugliness — as we’ve seen in the case of former Clippers owner Donald Sterling.

And yet if we study Krause’s trajectory, we see that he began from a different place. The man dancing with the team in 1991 is not the same guy who put Jackson on the chopping block. He’s a man who made some difficult but necessary calls, but one who believes he can still be part of the group. He is the same guy who’s being razzed by Jordan and Pippen for his height, his awkwardness and for striving to be part of their circle. When Krause realized he couldn’t be, he tried to find his own share of the limelight away from them, infamously asserting “Players and coaches don’t win championships, organizations do.”

When Krause saw that he couldn’t connect with the team as much as Phil Jackson, a former player he himself recruited to coach, he made the move to scuttle him.

In a way we should pity Krause. He could never be a part of what he put together in quite the way he wanted to be. Craving credit, he found no gratification in the success. And so, he made a new team from scratch. It’s a shame he’s now being remembered more for what he destroyed than what he created, and sadder still that he couldn’t help himself.

What is it with Jewish guys like Jerry Krause and basketball?