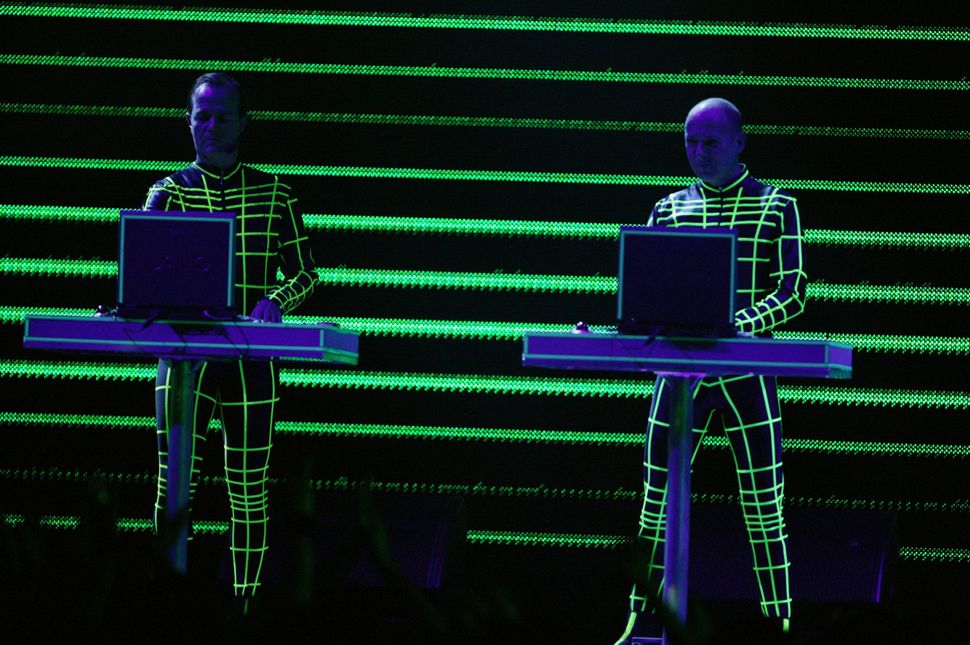 The founder of pioneering German electronic group, Kraftwerk, Florian Schneider has died at 73. While there is nothing explicitly Jewish about the legendary band, or its founder, Kraftwerk was open in its attempt to create a new German identity in the wake of, and as a reaction to, Nazism and the Holocaust. Take, for example, their two key albums, “Autobahn” (1974) and “Trans-Europe Express” (1977).

While the Nazis did not invent the Autobahn, they capitalized on it to accelerate their Reichsautobahn project along with Hitler’s “pet project,” the Volkswagen. In the postwar era, increasing mobility and the modernization of the motorways, as celebrated by Kraftwerk in “Autobahn,” was seen as a sign of progress away from the Nazi past and towards a new Germany free of the shackles of history.

Likewise, Kraftwerk’s image of a pan-European railway evoked in “Trans-Europe Express” was an antidote to that of the instrumental role of the Reichsbahn in transporting hundreds of thousands of Jews and others to their deaths. Kraftwerk’s track envisaged a borderless Europe in which anyone and everyone could travel freely.

Kraftwerk and its music recalled the pre-Hitler era of 1930s Weimar Germany, Bauhaus, and German Expressionism, during which there was significant Jewish influence. One of their tracks is named “Metropolis” in homage to the 1927 film by Jewish director Fritz Lang. In that movie, the scientist, Dr. Rotwang, creates a robot or golem whom he calls the “machine-man” or “machine-person.”

Kraftwerk increasingly began to present themselves as the “man-machine” (in German: die mensch-maschine, from which, of course, Yiddish derives the word mensch). As the band began to increasingly liken themselves to, and replace themselves with dummies or robots, they obliquely invoked the legend of the Jewish myth of the golem. Indeed, their growing reliance on computers to generate their sounds echoed that of the modern Kabbalists, that is, creators of golems — computer scientists who used numbers to generate artificial life.

The cover image of the resulting album “The Man-Machine” in 1978 was a deliberate duplication of the work of the Jewish graphic designer, El Lissitzky. On the back cover of the album was an excerpt published by him in a 1922 children’s book entitled Two Squares: A Supremacist Tale of Two Squares in Six Constructions. An accompanying note made this connection explicit: “Artwork Karl Klefisch/Inspired by El Lissitzky.”

Yet, at the same time, on that very album, Kraftwerk deliberately used imagery and a red, white, and black color scheme associated with the Nazis as a means to encourage an unwilling Germany to face its past and to look itself in the mirror.

But, in Kraftwerk’s rejection of their haunted Nazi past, African American rappers in New York found an inspirational beat to influence their music. Rappers such as Africa Kool DJ Herc and Afrika Bambaataa, who hailed from the Bronx, made such iconic hits as “Planet Rock,” leading to the creation of a whole new genre of music. But that is another story.