Why filmmaker Sasha Neulinger is sharing his story of abuse 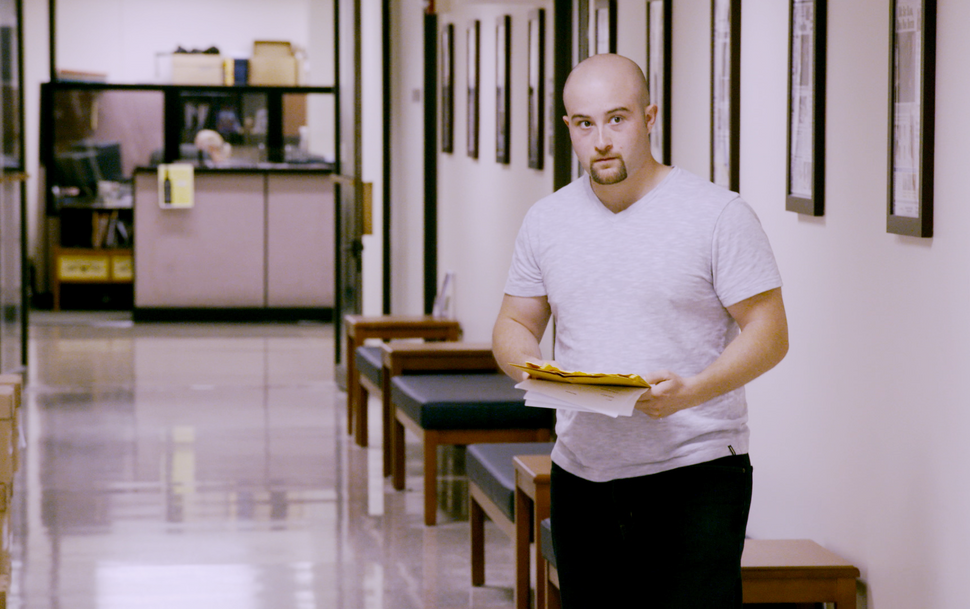 Sasha Joseph Neulinger in his film “Rewind.” Image by Courtesy of FilmRise

In 2012, Sasha Neulinger was finishing his film degree at Montana State University. He was 23 and had a job working on a show for National Geographic. He was excited to see what the future held, but his past wasn’t done with him yet.

“I was really enjoying where I was, and yet there was still this voice in the back of my mind, which came from my childhood traumas,” said Neulinger, now 30, married and living in a newly-built house in Montana. “That victim voice would sometimes come into my present day experience and say ‘Sasha, you’re dirty. You’re disgusting. You’re unlovable.’”

From the time he was a toddler and until the age of seven, Neulinger was sexually abused. His abusers were family — his uncle Lawrence Nevison and Lawrence’s son, Stewart, who also abused his Neulinger’s sister, Bekah. But Neulinger says that his eldest uncle, Howard Nevison, was the most brutal of his abusers and Neulinger’s father alleges that Howard also molested him and Lawrence when they were children, beginning the cycle. Howard was also the one who faced the lightest consequences for the accusations against him. While Lawrence served 14 years for molesting Neulinger, and Stewart, who died in 2016, spent two years in and out of jail, Howard was sentenced to 12 years’ probation and now lives as a free man in New York City. He denies the charges.

Neulinger says that these men’s actions planted the self-loathing voice in his head. In an effort to silence it for good, he reached out to his father, Henry Nevison, a documentarian, who for years had taped his family’s comings and goings on a camcorder. Looking to revisit his personal history, Neulinger learned his father had amassed 200 hours of footage of family gatherings and of Neulinger growing up.

“For every question that was answered in the tapes I had 10 new questions for the people involved in my life,” Neulinger said. “And I thought that if I was going to take the time to watch this footage and ask these questions I may as well document the experience, because if it turns out to be a positive or helpful experience for me and my family then that’s something that should be shared.”

On Friday, May 8, Neulinger’s documentary “Rewind” will be available to the world through video-on-demand and on Monday, May 11, it will be broadcast to 280 million households through PBS on “Independent Lens.” The film is a raw and unflinching look at an inter-generational legacy of abuse told through archival footage and interviews with Neulinger’s parents, sister, legal team and childhood therapist. At its center is his journey to understand his early life, but underpinning the film is an indictment of the way these sensitive cases have been handled and how that might change.

When Neulinger launched a Kickstarter for the film in 2014, he went public with his identity as the young plaintiff in the four-year case against Howard Nevison, who had been a celebrated cantor at Temple Emanu-El in Manhattan until he was placed on leave in 2003, following his 2002 arrest on charges of molesting his nephew. In 2006, Nevison pleaded guilty to five misdemeanor counts of abusing Neulinger when he was between the ages of four and seven, including indecent assault, corruption of the morals of a minor and terroristic threats. The guilty plea was part of a plea deal and he admitted no wrongdoing.

“That was a very scary moment for me,” Neulinger said of revealing his name on Kickstarter, “but what happened was I received over 6,000 personal messages from survivors from around the world.”

Soon after, Neulinger began a public speaking career, founding the LLC Voice for the Kids, with which he travels the country to educate law enforcement, members of the F.B.I., Child Protective Services and mental health professionals about best practices for dealing with childhood sex abuse. With the nonprofit Mission Kids, he is a vocal proponent of child advocacy centers. The centers are “safe spaces” where children can give an account to a forensic interviewer and have their testimony taped for future review. The centers were a resource Neulinger didn’t have as a child growing up in Montgomery County, PA.

“As an eight year old I was asked to retell all of the stories of all of the abuse I experienced dozens of times before I even saw a courtroom. That is systematic re-traumatization,” Neulinger said. “If you ask an adult sexual assault survivor to explain what happened they might not be able to, so try asking a four, five, six, seven, eight-year-old and try doing it dozens of times. That’s horrific.”

Neulinger’s own testimony against his relatives took years in and out of courtrooms and police stations. Lawrence and Stewart confessed in 2000. But Howard’s case, which began two years later, was appealed multiple times and was a high profile affair from the beginning. In “Rewind,” the detective charged with Howard Nevison’s case recalls how defense lawyers were brutal in questioning Neulinger’s recollections.

When Neulinger faced Howard, he believes he wasn’t just confronting his abuser, but the powerful organization that maintained his innocence and some of whose members raised money for his defense.

“I don’t think that powerful institutions are ever going to stop trying to bury allegations of abuse. It’s when they get caught that they try to act like they care,” Neulinger said.

For Neulinger, Temple Emanu-El — which did not return multiple requests for comment — was one of many institutions that fail to recognize the potential for human flaws within their hierarchy. To admit those failings is a sensitive issue, particularly when it overlaps with a matter of faith.

“Why does a house of God raise money, presumably millions of dollars, to defend a man who’s been accused of abuse by his two younger brothers and his nephew?” Neulinger asked. “Is it easier to say ‘No it didn’t happen?’ Just move on and deny it? I think it’s a million times harder to step back and say ‘OK, what does it mean about my life and the state of our world if the person who I trust with all my heart and faith is capable of committing these crimes?’”

Neulinger, who said he did not receive a response from the temple during the documentary’s production, still valued a more personal, familial faith, testifying against his uncle while wearing his maternal great-grandfather’s kippah. Sometime before, he took something else from his “Zeyde” — the last name Neulinger.

In the trials, Neulinger “reclaimed” his voice under the new name and, with a move to Montana for college, he started living a life where “child abuse wasn’t the primary focus of my existence.”

In moving on, Neulinger has made his mark with his own story. And through making his film, he found the plot himself.

“I was able to watch my childhood self through an objective lens and I was able to see a beautiful child and most importantly — a child. A child who was sweet, beautiful, innocent and didn’t choose any of what happened to him,” Neulinger said, “and it was the first time that I could truly see that for myself and it was a gateway into learning how to truly love my inner child and ultimately love myself.”

Why filmmaker Sasha Neulinger is sharing his story of abuse