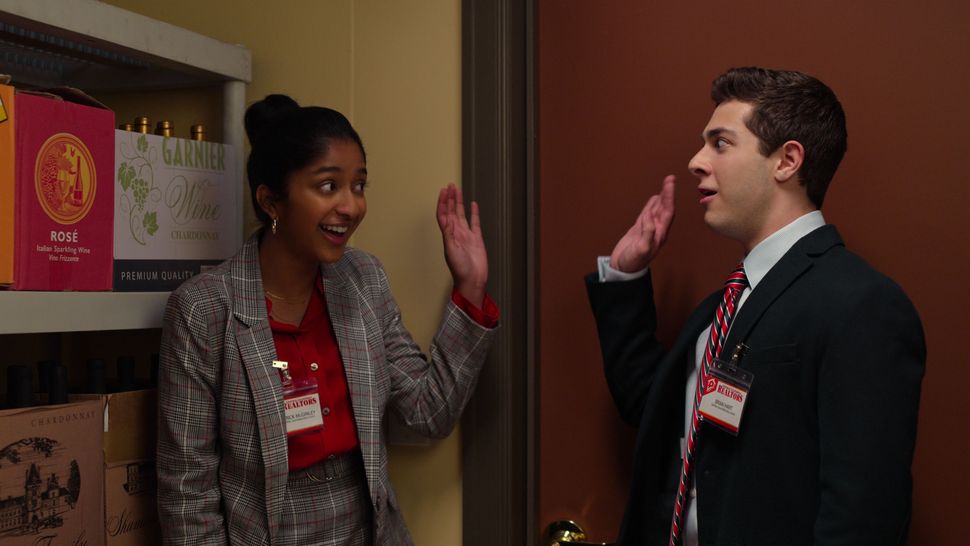 Devi and Ben high-five in Netflix’s “Never Have I Ever.” Image by netflix

“Never Have I Ever,” Netflix’s newest teen comedy from Mindy Kaling — the comedian best known for her writing and acting on “The Office” and “The Mindy Project” — has been broadly celebrated for its diversity, and widely hailed as the perfect quarantine watch to binge. That praise is in many ways deserved: The show hilariously captures the nuances of teenaged hormones and awkwardness — so accurately that I sometimes had to pause mid-episode to take a break from reliving my own high school years — yet is nevertheless a feel-good, sweet show with a wildly diverse cast. Well, feel-good except for one thing: it has a Jewish problem.

The show, which stars Maitreyi Ramakrishnan as an Indian-American teen named Devi, is loosely based off Kaling’s own experience in high school and sets out to be the kind of diverse show Kaling yearned for as a teen. But for all the show’s attempts to represent a wide range of identities honestly, instead of according to stereotypes, the Jewish character is glaringly clichéd.

As the series opens, Devi is recovering from a year in which her dad died suddenly, after which she suffered months of psychosomatic paralysis in her legs. To boot, her mom (Poorna Jagannathan) is strict and overbearing, and she’s perceived as a deeply uncool virgin who only hangs out with other nerds — her two best friends, Fabiola (Lee Rodriguez), a robotics whiz, and Eleanor (Ramona Young), a flamboyantly dressed actress.

Somewhat radically, the characters, no matter their background, are high school students first and foremost, worried about first boyfriends and being invited to “no-parents parties” where they might even be offered drugs. (Of course, they’d refuse — but how cool to have the chance to say no.) Eleanor and her mom are both highly dramatic theater obsessives, a conscious diversion from the shy, nerdy Asian stereotype. Fabiola is a queer, Afro-Latina engineer. And Paxton Hall-Yoshida, Devi’s crush, is a half-Japanese jock, lusted after by most of the school, an obvious reversal of prevailing sexual stereotypes about Asian men. His sister, who has Down Syndrome, is a stylish fashion designer. Characters from “Never Have I Ever” stare at a robot. Image by netflix

But Devi’s nemesis, Ben (Jaren Lewison) is the exception, a main character drawn entirely in broad strokes of Jewish stereotypes. He’s a wildly rich nerdy suck-up, with an absent, workaholic Hollywood lawyer for a dad and negligent Jewish-Buddhist type for a mom. He falsely cries anti-Semitism when his classmates reject his (objectively terrible) idea for a class project. And he’s dating a painfully stereotypical Jewish American Princess named Shira, who he doesn’t even like, in order to raise his own social clout; Shira, he tells Devi, is dating him for his money.

Ben is the only character on the show so explicitly defined by his cultural identity, and the only one subjected to such pernicious stereotypes. Worse, while we’re frequently reminded that Ben’s character is Jewish, the show is clearly not interested in investigating that identity with anything like the nuance it applies to other characters, whose ethnic identities are naturally woven into the tapestry of their day-to-day problems of cliques, hormones and awkwardness.

Devi often struggles with being Indian, feeling trapped by traditional expectations and embarrassed by religious practices. Eleanor, Paxton and Fabiola’s ethnicities don’t seem to have a major impact on their day to day lives, which is groundbreaking in itself. Ben’s Jewish identity isn’t something he struggles with coming to terms with; it’s not even a big part of his daily life, and yet his character’s development is entirely rooted in these tired tropes. Even when his character is fleshed out in an episode devoted to him, every new piece of information neatly slots into a Jewish stereotype — this is when we learn about the absentee parents, see how bad his relationship with Shira is, and feel, viscerally, how unhappy and unpopular he is. He does become more sympathetic when we witness his lonely family life and see him crying in Devi’s mom’s dermatology practice, yes, but his character still lacks nuance.

It’s not that Ben is the only recipient of negative stereotypes. There are uncomfortable jokes about Indian stereotypes, including a whole plot line about arranged marriage, Devi’s mother’s controlling strictness and references to casteism and servants, such as when Devi’s cousin mentions offhand that she would never do dishes in India — they have servants for that.

When it comes to Ben, sometimes — rarely — the series’ jokes succeed as commentary. Particularly notable is a moment when the principal of the school doesn’t want to say the word “Jew” in reference to Ben after an incident in the Holocaust unit of the history class. (“Your word not mine,” she says after he inserts it into her meaningful pause.) It’s a minimalist joke that deftly calls out the way Jewishness is so negatively coded — to some, simply acknowledging it sounds like a slur. The clarity of that scene makes the other Jewish references in the series — which are slapstick-y and lean heavily on references to expensive bar mitzvahs or status-grubbing — all the more frustrating. We can see, in the contrast, how easily it could have been different. Ben Gross smiles next to a blue and white birthday cake topped with his face in a scene from the series “Never Have I Ever.” Image by netflix

Look, Jews are not underrepresented in media. Yet positive depictions of Jewish characters, ones that neither minimize their Jewishness nor rely on it as a crutch for jokes, are still vastly outweighed by the negative portrayals — even when written by Jews (“self-hating Jew” is a Jewish stereotype, after all). “The Marvelous Mrs. Maisel,” though often celebrated for its frank depictions of Jewish people, leans heavily on the same negative stereotypes of superficial status obsession, dysfunctional families and money. Woody Allen’s pantheon of Jewish movies all center on neuroticism, unpopularity and, again, dysfunctional families. There’s a few signs of hope — “Broad City” stands out for its brash, out-of-the-box leads — but Jews are just as in need of stereotype-challenging representation in the media as other minority groups.

Ben isn’t an unlikeable character, as a whole. He starts out awful, giving Devi and her friends mean nicknames and teasing her daily, but over the arc of the season grows more relatable as he and Devi bond through class trips and family drama — pretty classic stuff for teenage rom-coms, really. By the end, he’s become almost likeable. So the issue isn’t that he contributes to negative Jewish stereotypes by being villainous or snotty. No, it’s just that, unlike every other character, he’s nothing besides Jewish. And that’s bad enough.

Mira Fox is an editorial fellow at the Forward. You can reach her at [email protected]