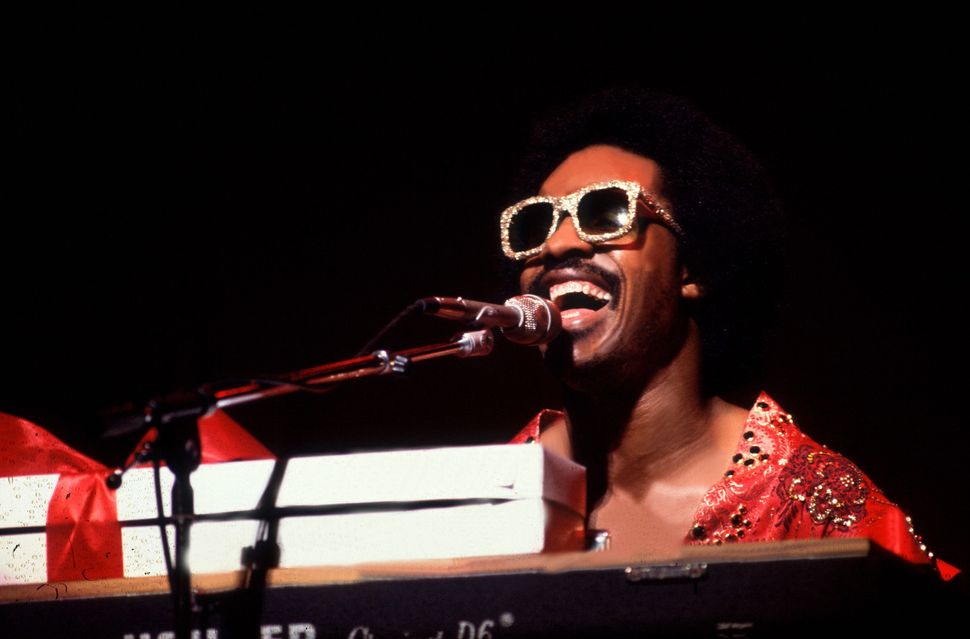 When I learned that Stevie Wonder was turning 70 on May 13, I was actually surprised by how young he is. At a time when his peers who emerged in the early 1960s – people like Paul McCartney, Mick Jagger and Bob Dylan – are all pushing 80, Wonder is something of a spry young thing by comparison. But how is it possible that he’s so young (and only ten years older than I am)?

The answer, my friend, is that in 1963, when he was 13 years old and still being billed as “Little Stevie Wonder,” he had his first mega-hit, the single “Fingertips,” which topped the Billboard Hot 100, making Wonder the youngest artist ever to hit number one. In fact, Wonder first signed a recording deal with the Motown imprint Tamla Records when he was just 11 years old. The point being that he had something of a head start on those other guys. In 1966, when he took Bob Dylan’s “Blowin’ in the Wind” to the number-one spot on the R&B charts, he was still only 16; Dylan, by contrast, was an elderly 25 at that point. By the time Wonder had a number-one hit with “You Are the Sunshine in My Life” in 1973, more than a decade into his career, he was still just 23.

Wonder, who was born in Saginaw, Mich., six weeks premature, became blind just a few weeks after birth. Not being fully developed, his retinas were detached; needing breathing assistance, he was put in an incubator. The combination robbed him of his sight at the age of six weeks. But that certainly didn’t prevent his musical flowering – while still in single digits, he learned to play multiple instruments, including piano, harmonica and drums (later in his career he was known to play every instrument on many of his recordings), and he formed a singing duo with a friend.

When Wonder was still singing and recording songs by other writers, he occasionally turned to the compositions of Jewish composers. An early favorite was Ron Miller, born Robert Norman Gould in Chicago. Miller was an in-house songwriter at Motown who penned early Wonder hits including “For Once in My Life” and “Yester-Me, Yester-You, Yester-Day.” (He also co-wrote “Touch Me in the Morning” for Diana Ross.) Wonder occasionally dipped into the songbook of the aforementioned Dylan; in addition to “Blowin’ in the Wind,” he recorded a version of “Mr. Tambourine Man.” He also was known to perform the Paul Simon-penned “Bridge Over Troubled Water” in his live sets in 1970, a year before Aretha Franklin recorded her Grammy Award-winning hit version.

By the late 1960s, Wonder began cowriting his own hits, including “My Cherie Amour” and “I Was Made to Love Her,” as well as songs for other Motown artists, including “The Tears of a Clown” by Smokey Robinson & the Miracles. By the early 1970s, his songs took on a more adult posture, and that decade saw him record a prolific number of now-classic love songs, protest songs and songs of spiritual longing.

While Wonder’s spiritual material was mostly inspired by his Christian background and his interest in Rastafarianism, a careful listening to his body of work reveals at least nine songs that deal with Jewish themes and concepts:

“Superstition” — Wonder’s 1972 number-one hit invokes the Biblical figures of Daniel and Jacob. “Very superstitious writings on the wall,” sings Wonder, alluding to the time that the Babylon prince Belshazzar called on the seer Daniel to read and interpret mysterious words that suddenly appeared on a wall of his palace. “Very superstitious, ladders ‘bout to fall,” sings Wonder in the next phrase, invoking Jacob’s vision of angels ascending and descending the ladder to heaven.

“Black Man” – On this track on his 1976 album “Songs in the Key of Life,” Wonder recites a litany of historical figures of all races, backgrounds, and nationalities who made key contributions to civilization. Wonder includes Luis de Santángel, a converso who served as finance minister to King Ferdinand II and Queen Isabella I of Spain. Santángel successfully persuaded them to help fund Christopher Columbus’ 1492 voyage in search of a western route to India and contributed his own funds to Columbus’s effort. Reading the writing on his wall, Santángel believed that the explorer might find a place of refuge for Spain’s conversos and Jews alike. Indeed, Columbus was granted the island of Jamaica, which became a destination for many Sephardic Jews after their expulsion from Spain and Portugal.

“Signed, Sealed, Delivered I’m Yours” – This 1970 hit was the first song played for dancing at my wedding a couple years ago, as the title boils down the essence of the ketubah, the traditional Jewish marriage contract, in five words. The lyrics even reference a Kabbalistic viewpoint of marriage, when Wonder sings, “Oowee baby, you set my soul on fire / That’s why I know you’re my heart’s only desire.”

“You Are the Sunshine of My Life” – A careful reading of this Grammy Award-winning number-one 1973 hit reveals that the narrator is Adam singing to Eve. For starters, when each refrain comes around, he sings, “You are the apple of my eye,” reminding her about how they got into this mess in the first place. Adam thinks back upon life before Eve, when he was (literally) a single man: “You must have known that I was lonely / Because you came to my rescue.” As the story goes, G-d sensed Adam’s loneliness, created Eve to join Adam and ease his aching heart, and gave them the keys to Paradise – or, as Stevie-as-Adam sings, “And I know that this must be Heaven / How could so much love be inside of you?”

“Visions” – In this track off Wonder’s landmark 1973 album, “Innervisions,” the singer asks, “Have I lived to see the milk and honey land?” after having a vision of an earthly paradise.

“Village Ghetto Land” – This frank and painful portrait of inner-city African-American life found on “Songs in the Key of Life” mirrors that of European Jewish life in preceding centuries, the very word “ghetto,” meaning “foundry,” having been first applied to the quarter where Jews were confined in 16th century Venice.

“Have a Talk With God” – This ditty from “Songs in the Key of Life” posits the Divinity as a Freudian analyst. “When you feel your life’s too hard, just go have a talk with God,” sings Wonder, who goes on to explain, “He’s the only free psychiatrist that’s known throughout the world for solving the problems of all men, women, little boys and girls.”

“Heaven Is 10 Zillion Light Years Away” – Somewhere in the mystical writings of the Zohar — although no one has quite yet identified exactly where – a sage recounts that when Reb Rogovoy asked Reb Wonder where is heaven, Reb Wonder replied, “They say that heaven is ten zillion light years away.”

Seth Rogovoy is a contributing editor at the Forward who frequently mines popular culture for its unrevealed Jewish affinities.