What to watch before ‘Hamilton’ drops on Disney+ 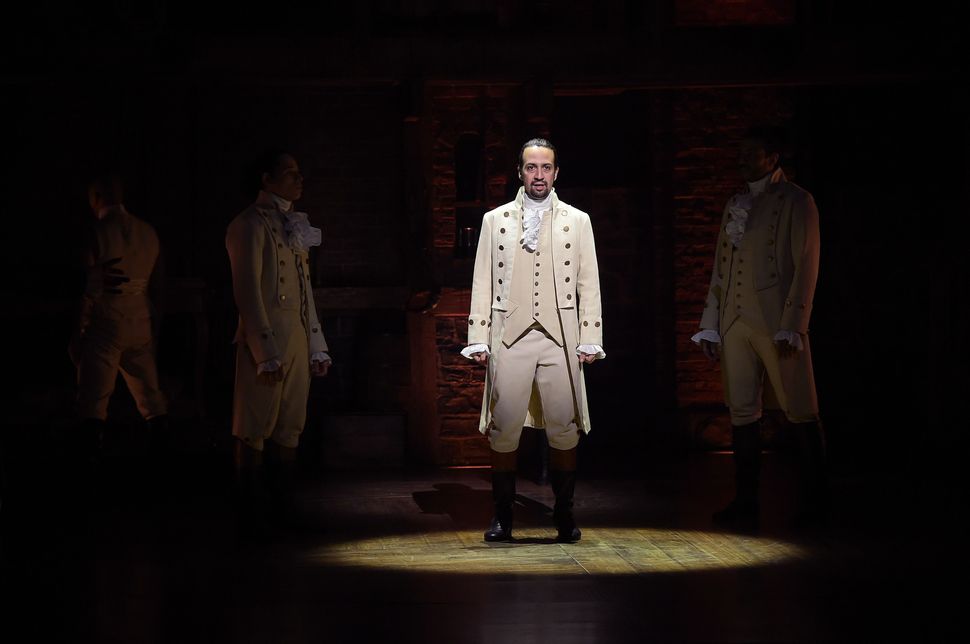 Alexander Hamilton, for all his contributions to the American experiment, was not exactly a man of the people. Seeing as he was a grasping social climber and quintessential capitalist, it makes sense that being able to see his namesake musical was, for so long, a mark of status. But no more! Thanks to Disney’s beneficence, a filmed version of the original Broadway production of “Hamilton” will be available to stream on Disney+ beginning July 3. It’s an exciting development, but still nearly two months off.

While “The Room Where it Happens” will soon be any room with internet access (and a Disney+ subscription), we were kind of hoping if and when this moment came it would be like the stealth release of Beyonce’s “Lemonade.” As the musical tells us, “waiting for it” has its pitfalls and anticipation can be overwhelming. What should we do to pass the time until the Pulitzer-winning musical reaches us on Independence Day Eve? Here are some Jewish twists on the American Revolution to keep you occupied till then.

While a far stodgier take on the revolutionary period than Lin-Manuel Miranda’s free-styling founding fathers, this musical film has an indelible charm and humor. Covering the signing of the Declaration of Independence, “1776” succeeds in showing just how bumpy the road to freedom was. The signing was nothing like the all-present-and-accounted-for nature of this John Trumbull painting. In a room of strong personalities and stifling heat, these men managed against all odds — and over the course of many months — to make history. Leave it to Jewish librettist and composer Sherman Edwards to capture our founders kvetching while perfectly rendering Thomas Jefferson’s pains over having to draft the most daunting mission statement of all time.

Where to watch: The whole film is on YouTube

Jewish men and women played no small role in our nation’s war of independence, but Haym Salomon, the financier who helped bankroll the Continental Army, has a special place in our history. This 20-minute Oscar-winning short film by “Casablanca” director Michael Curtiz chronicles the efforts of Salomon (Claude Rains), from his early spywork with the Sons of Liberty to his untimely death from tuberculosis at the age of 44. This one’s notable for a scene where a messenger from General Washington interrupts a Kol Nidre service. Like Hamilton, who was given too little attention in history class before his hit musical glow-up, Haym Salomon is often overlooked. Where’s our klezmer-Sephardic music retelling of his story, John Zorn?

This AMC show about the Culper Ring spy operation was known for bringing suspense and sex appeal to the Revolutionary War. It also introduced a Jewish George Washington. Well, the actor, at least. Ian Kahn played our first president in the series, and while they ugged up his leading man looks a bit, the 6’1” actor does a pretty good job playing the pride of Mount Vernon. Try this one if you’re looking to find a “Fauda” replacement, or want to learn a bit about the men working behind the scenes of our struggle for independence.

Where to watch: The whole thing is on YouTube

John Huston directed this docudrama for the National Park Service. That may sound like homework, but it was made by the guy behind “The Maltese Falcon” and “The Treasure of the Sierra Madre.” So yeah, you’re in good hands. The real draw here is seeing Eli Wallach play Benjamin Franklin. It’s inspired casting, and Wallach’s charisma will make even the most hardened cynic consider his civic responsibility.

Where to watch: You can view the film here

Adapted from George Bernard Shaw’s play of the same name, this film features Laurence Olivier, Burt Lancaster and the Ragman’s Son himself, Kirk Douglas. Douglas plays Dick Dudgeon, an alcoholic prodigal son in Colonial New Hampshire who professes his service to Satan and, nonetheless, does the right thing in the end. It’s Shaw we’re dealing with here, so it’s funny, well-written and has some jibes at the expense of both the British and American sides of the war. While it’s nowhere near as edgy as “Hamilton,” it’s brisk, well-made and its source material, when it debuted in 1897, was pretty subversive for having an unrepentant sinner as its lead.

What to watch before ‘Hamilton’ drops on Disney+