He survived the Holocaust, then interrogated Eichmann. 60 years later, he remembers. 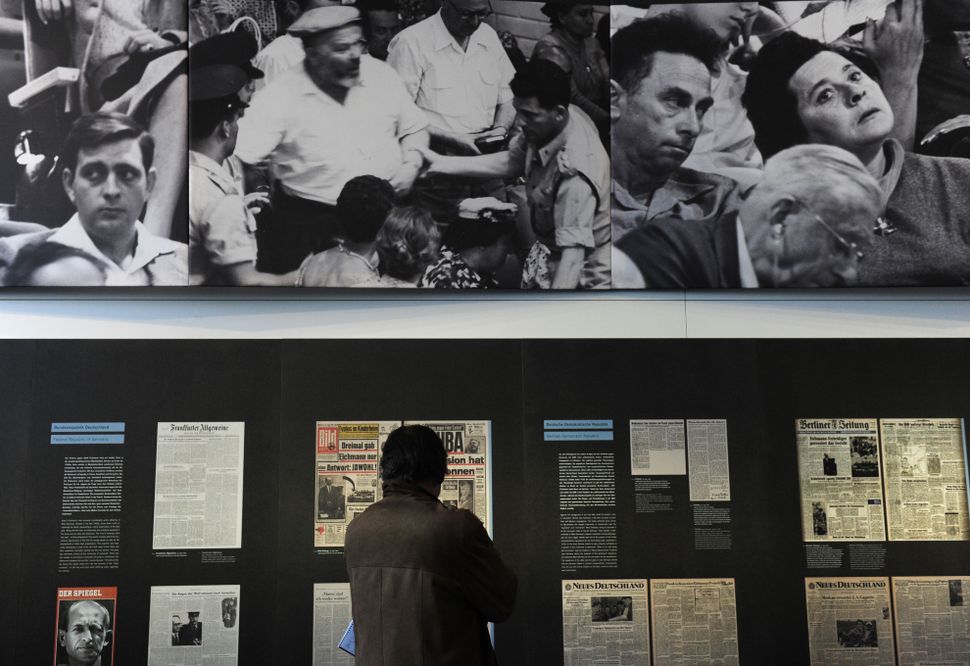 A scene from the exhibition “Facing Justice – Adolf Eichmann on trial” at the Topography of Terror documentation center in Berlin on April 5, 2011. Image by JOHN MACDOUGALL/Getty Images

60 years ago this week, Adolf Eichmann, one of the primary architects of the Holocaust, was captured in Argentina by a secret group of Mossad and Shin Bet agents.

It was a stunning development. When Israel’s then-Prime Minister David Ben-Gurion announced Eichmann’s capture on May 22, 1960, 11 days after he was whisked out of Argentina, the news revived what much of the world saw as a closed chapter of history. 15 years after the end of the Holocaust, the Jewish state would bring one of the Jewish people’s worst tormentors — a man who, according to a contemporaneous New York Times article, found his role in the deaths of 6,000,000 Jews “a source of extraordinary satisfaction” — to trial.

That 1961 trial, followed by Eichmann’s execution, was a formative episode in the life of Israel, a young country that had in many ways de-emphasized the genocide that precipitated its creation. Over 100 Holocaust survivors took the stand to speak about the horrors they’d experienced; it was the first high-profile public recounting of the trauma through which so many citizens of the new country had lived. Suddenly, the country’s sense of identity began to shift, a change with long-lasting consequences, some of them controversial. “Today in Israel, the Holocaust is very important,” said Michael Goldmann-Gilead, a Holocaust survivor who was part of the team that interrogated Eichmann prior to his trial.

I spoke with Goldmann-Gilead, who goes by Mickey, a couple years ago, when he was on a visit to New York. His wife, Eva, helped translate; we talked over strong coffee in an apartment on the Upper West Side, the traffic roaring outside. The following conversation has been edited for length and clarity.

Talya Zax: Can you give me a brief version of your life story?

Michael Goldmann-Gilead: I was born in July, 1925, in Katowitz, west Poland, near the German border. Today, it is Poland, but up to 1920 it was Germany. In ‘39 [came the] German invasion of Poland. We escaped from our city to central Poland; we were refugees [for] two years, up to June, ‘41, [when we were moved] to a forced labor camp. In July ‘42, the Germans took my parents and my little sister in a transport. She was 10 years old. I came a year after. I was in Auschwitz up to January ‘45. Then they took us out to the death march, and I escaped. I was hidden by a Polish family. And then the Russian Army, in January 1945 they came. I was free. I volunteered for the Red Army; in May ‘47 I was free from the army. I came to Eretz Yisrael on an illegal ship. The British captured us, put us on a boat to Cyprus, to an English concentration camp. After 18 months in the English concentration camp, I came to Israel. From this time, I am a native of Israel. My wife, Eva, she was born in Jerusalem, from Jewish-German parents. We have five children, and 12 grandchildren.

Can you tell me now about your involvement in the trial of Eichmann?

I came in 1949 to the Israel police, criminal investigations. When we took Eichmann from Argentina to Israel, I was a member of a special interrogation team, a special unit. The interrogation took place [over] nine months in 1960-61. And then, [for the] four months of the trial, I was a personal assistant to the attorney general. He was [sentenced] to death, and hanged. I was officially one of the witnesses on behalf of the Israeli police, when he was hanged.

What the interrogation process was like, and how did you feel about being part of it?

As a Holocaust survivor, it was not easy. But we had to make a trial against Adolf Eichmann so the whole world should know what has happened in the Holocaust. It came out in the trial of Adolf Eichmann, in detail. We brought 110 people to testify about what happened with them during the Holocaust. We had to prove that Eichmann was an involved person in the murder of millions of Jews: he did it with enthusiasm, hating Jews. He told us, ‘I only executed orders.’ He gave orders. He was looking for each Jew, to send them to the concentration camps, or to the pits in East Europe where they were killed by the Nazis personally. He never admitted he was guilty. When he stood at the hanging, he didn’t ask for forgiveness. Other big Nazis, they asked for forgiveness before they were hanged. Even the commander of Auschwitz asked for forgiveness. Eichmann said nothing.

In your opinion, do you think he would be less responsible, morally, for what he did if he had truly just been following orders?

No. It’s the same. If you receive an order to kill somebody, you are responsible. But we showed, we proved that he did it with personal hate. That he wanted to do it.

What were your feelings upon his execution?

I didn’t feel any feeling of vengeance. Because it is impossible. There is no version of vengeance possible for what they have done to us.

Do you believe in an afterlife?

Afterlife, it only happens when you leave good memories. Eichmann and the rest of them are gone forever. But his idea is still living.

Have you seen that idea take root in other minds in your own life?

Yes of course, we see it each day.

So you participated in the investigation of Eichmann, and the trial. Was that your only time participating in the trials of Nazis?

It was the only time. I was not an interrogator of other Nazis. I was a witness against Gestapo men who were in our ghetto.

Now that it’s many decades later, and you have gone around the world speaking about your experiences, what are the things you most want the people you speak to to know about the Holocaust and the people who executed it?

My aim is to speak what happened. We want [for] the world [to] know what happened to us, and that it should not happen again. Not only against Jews, but against other nations.

He survived the Holocaust, then interrogated Eichmann. 60 years later, he remembers.