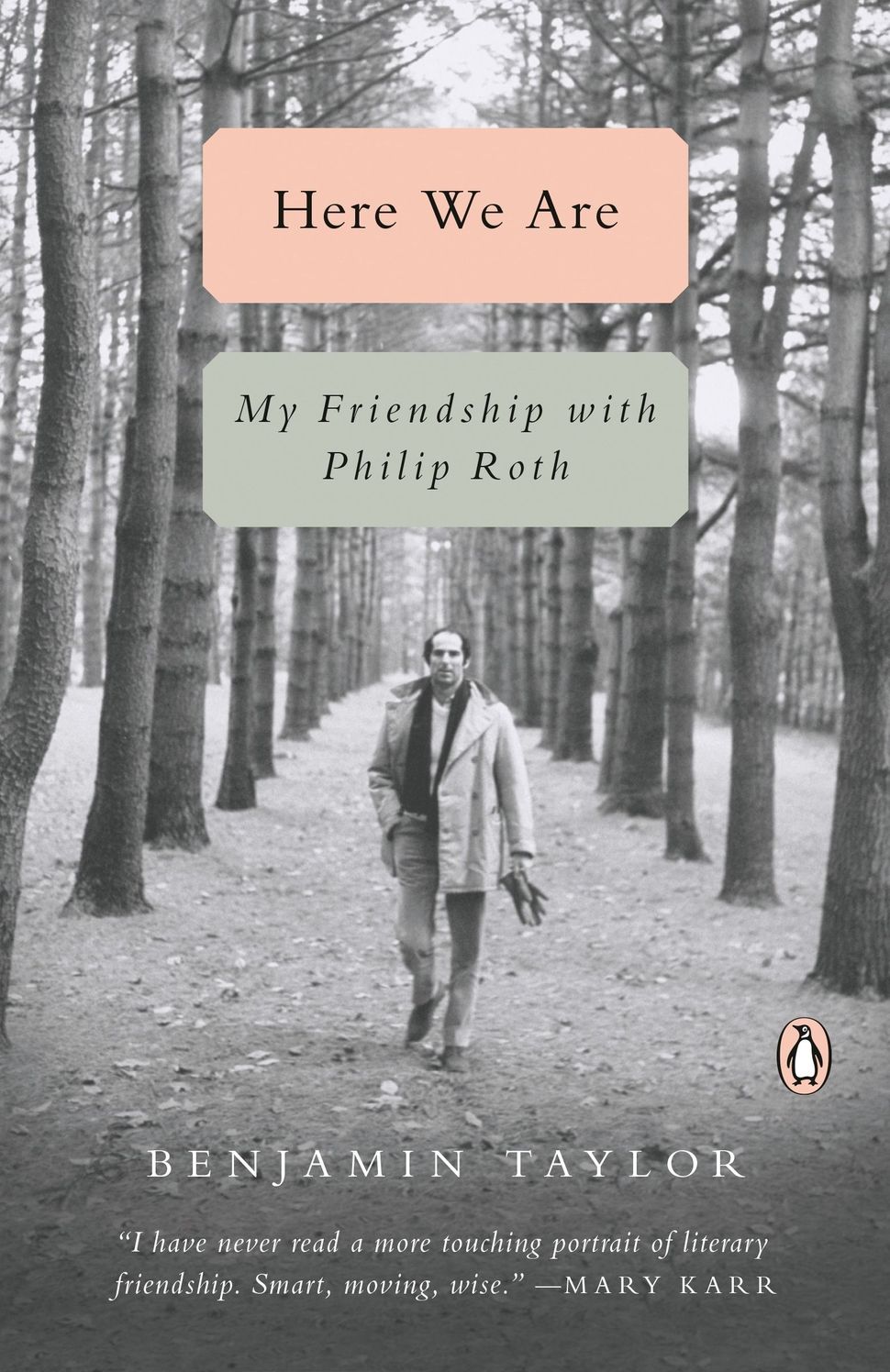 Here We Are: Benjamin Taylor chronicles his friendship with Philip Roth. Image by Penguin

Here We Are: My Friendship with Philip Roth

Their relationship developed at a slow burn. Benjamin Taylor and Philip Roth met in 1994, at a mutual friend’s birthday party. Four years later, after reading “I Married a Communist,” Taylor wrote a letter, and Roth responded with a phone call. Their first meal came three years later, with the conversation devoted to another of Roth’s books, “The Dying Animal.”

The two writers were 20 years apart in age. Taylor, the younger man, was gay, Roth abundantly straight. He was world-renowned, a perennial Nobel Prize also-ran; Taylor, while accomplished, didn’t publish his debut novel until 1995. None of those differences mattered. United by laughter and a shared love of history and literature, they became best friends. Theirs “was a conversation neither could have done without,” Taylor explains in his gorgeous new memoir, “Here We Are.”

Taylor’s concise volume (parts of which already have appeared in Harper’s and The Atlantic) is a deeply loving, occasionally irreverent portrait of the artist. It’s also something of a paean to friendship itself. At this time of disconnection and disorientation, Taylor, president of the Edward Albee Foundation and a trustee of the John Simon Guggenheim Memorial Foundation, reminds us of the anchoring power of human connection.

Taylor’s epigraph, drawn from one of Roth’s finest novels, “The Human Stain,” laments “the stupendous decimation that is death,” existing alongside the gift of “a perfect day lacking nothing.” It’s an apt encapsulation of the memoir’s stance, its interweaving of grief and gratitude. Drawing on Roth’s writings and notes of their conversations, Taylor mourns his friend, who died in May 2018, by celebrating their time together.

In common with his fictional alter ego, Nathan Zuckerman, Roth “could seem a beguiling but remote citadel: august, many-towered, lavishly defended.” But those who penetrated Roth’s “inner keep,” Taylor writes, drawing out the metaphor, found “the young man he’d remained all along, full of satirical hijinks and gleeful ventriloquisms and antic fun building to crescendos.”

Like memory itself, “where the living may rejoin the dead,” Taylor ranges back and forth in time, not in thrall to linearity. He reminds readers of Roth’s debt to his birthplace, Newark’s Weequahic section. Then he fast-forwards to Roth’s final weeks in the cardiac intensive-care unit of New York-Presbyterian Hospital, where he died with dignity and in peace, surrounded by friends, relatives, employees and ex-lovers. Taylor was on hand to identify the body at the funeral parlor.

“We’ve laughed so hard….Maybe write a book about our friendship,” Roth once told Taylor. Taylor takes this as permission, vowing fidelity to the truth.

The Roth of Taylor’s acquaintance possessed “a terrible gift of intimacy,” wrangling secrets while guarding at least some of his own. He was sufficiently sensitive to Taylor’s deepening depression to direct him to his own psychiatrist, perhaps saving his life. When Taylor’s brother dies in a snowmobiling accident, Roth phones every day for months. Taylor reciprocates by reading Roth’s manuscripts and nursing him through his last, misbegotten attempts at romantic love.

Taylor quizzed Roth about his literary development. “I discovered I was not a gloomy but a raucous writer,” Roth told him. He opted for specificity – “individuals enmeshed in some nexus of particulars” – over philosophical generalizations or big ideas. In his bestselling and controversial “Portnoy’s Complaint,” written at a time of national upheaval, Roth said he “flung my harmless obscenities back at the world-historical ones.”

Taylor captures Roth’s idiosyncrasies: his embrace of mediocre restaurants, his love of art films, his (unaccountable) hatred for the stage. He enumerates his health trials: a back injury, heart disease, depression. He tells us Roth kept a suicide kit on hand, and expected Taylor to help him if the time ever came.

In matters of the heart, Roth famously courted scandal, but also shrank from it. While “monogamy was anathema to him, so was enduring the opprobrium the polyamorous suffer…,” Taylor writes. “Torment about rectitude plagued him as acutely as any itch in the loins.” He insists that “Philip made a poor Don Juan,” since he was “too apt to fall in love.” He was also “a great proposer of marriage,” including, in one case, to Kafka’s niece. But he associated sex with the life force. “I’ve needed sex…in order to be indomitable, briefly deathless,” Roth says.

Roth came to disdain omniscience in his work, to accept that truth was a matter of perspective, Taylor suggests. But he showed no such humility in his personal life, accepting no blame for his two unhappy marriages (including his union with the actress Claire Bloom, who savaged him in a 1996 memoir, “Leaving a Doll’s House”). Even after Roth retired from making art, Taylor reveals, he churned out long, unpublished catalogs of grievances. “Philip could not get enough of getting even,” Taylor writes.
The man Taylor describes has his pettiness, his faults. But he’s redeemed not just by his acid wit and literary mastery, but also the generosity of his friendship. In “Here We Are,” Taylor amply returns the favor.

“There was no dramatic arc to our life together,” he writes, though, paradoxically, his free-associative, formally flawless narrative at least gestures at one. “It was not like a marriage, still less like a love affair. It was as plotless as friendship ought to be. We spent thousands of hours in each other’s company. He was fully half my life. I cannot hope for another such friend.”

Julia M. Klein, the Forward’s contributing book critic, was a two-time finalist for the National Book Critics Circle’s Nona Balakian Citation for Excellence in Reviewing. Follow her on Twitter @JuliaMKlein