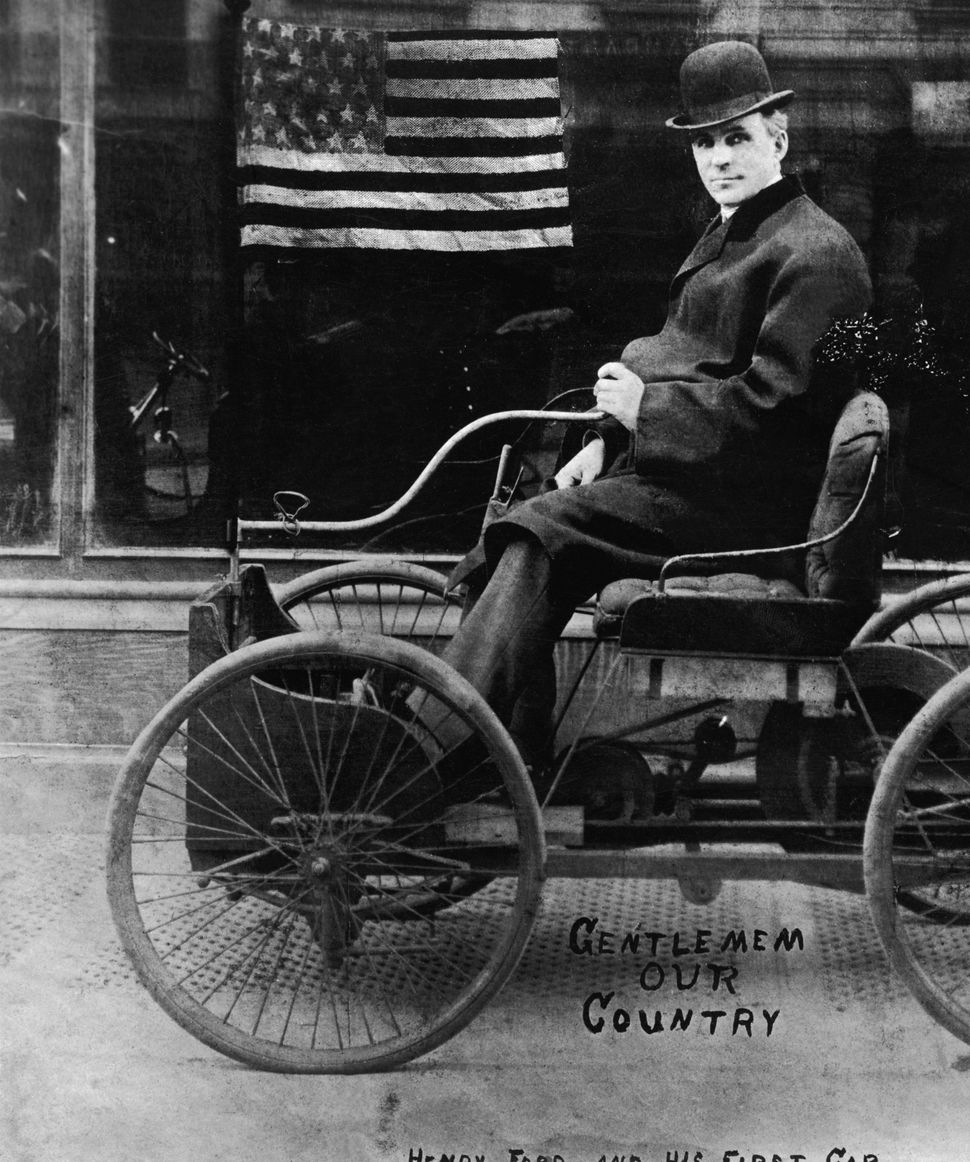 Henry Ford in the late 1890s. Image by Library of Congress/Getty Images

There are a lot of things Donald Trump could praise the Ford Motor Company for.

At its inception, the automobile manufacturer made cars accessible and reduced the strain on laborers through the assembly line process, and, just recently, the corporation began producing ventilators and face shields to support hospitals during the coronavirus pandemic. That last effort prompted the president to deliver a speech at a Michigan Ford plant on May 22. In his remarks, Trump opted to evoke the era of those earlier innovations.

“The company founded by a man named Henry Ford,” Trump said Thursday, in the presence of Ford’s great-grandson, Bill Ford Jr. “Good bloodlines, good bloodlines — if you believe in that stuff.”

Well, if there was one thing Henry Ford believed in — apart from keeping prices low and offering consumers any color car “so long as it’s black”— it was eugenics. So, well done pleasing the founder.

The fact that Trump made mention of the “good bloodlines” of a notorious bigot, who subscribed to race science and promulgated an anti-Semitic forgery in his paper, was not lost on anyone. Twitter users and reporters quickly chimed in to point out the insensitivity of the remarks. The head of the Anti-Defamation League, Jonathan Greenblatt, called on the president to apologize. Meanwhile, David Simon, co-creator of HBO’s “The Plot Against America” miniseries, thanked the president for the free plug.

Can’t thank @realDonaldTrump enough for delivering a top-headline tie-in for HBO’s “Plot Against America.” Just when publicity for our little rumination on fascism and demagoguery is waning, old Mr. Reliable, stunted soul and all, arrives to praise one of the worst antagonists. https://t.co/RoEOmoiS3E

For those wanting a refresher on Henry Ford’s true character, you could do worse than Simon’s miniseries. While it’s an alternate history — based on Philip Roth’s 2004 novel of the same name — it presents a credible depiction of Ford’s views on race. As in Roth’s book, Ford serves as secretary of the interior for Charles Lindbergh’s isolationist administration. But Simon gives him more to say, making Ford the truly hateful mouthpiece of the presidency while Lindbergh — following his infamous Des Moines speech — sticks to anodyne prepared statements.

“He hates Jews, everyone knows it,” Evelyn Finkel (Winona Ryder) says of Ford in the series.

“He does and yet he will be entirely polite when you meet him,” says Rabbi Lionel Bengelsdorf (John Turturo), who engineered Lindbergh’s Jewish “integration” programs. “Because you have the president’s ear, and the president is not, despite what others say, a Jew hater, so Mr. Ford will behave.”

Of course Lindbergh didn’t like the Jews. He and Ford were natural allies; they were the first Americans to receive medals from the Reich. When Evelyn does meet Ford — at a state dinner for Nazi Foreign Minister Joachim von Ribbentrop — he is not on his best behavior.

Lindbergh snubs Bengelsdorf. But when Finkel tells Ford (Ed Moran) that she feels like she’s at a “Southern debutante ball,” he tells her, “If this were the South, you Jews would be out back, rilin’ up the n—ers.”

Go shit in the ocean. According to Simon, Ryder insisted on delivering the line to someone. But by having her say it to Ford, Simon and co-creator Ed Burns gave Ford’s legacy of vile anti-Semitism, racism and — yes, race science — the salute it deserves.

Thankfully, hatred isn’t hereditary. By all means, laud the Ford family for its good work now, but don’t bring blood into it.