What was Jewish about Jimmy Durante? More than you might think. 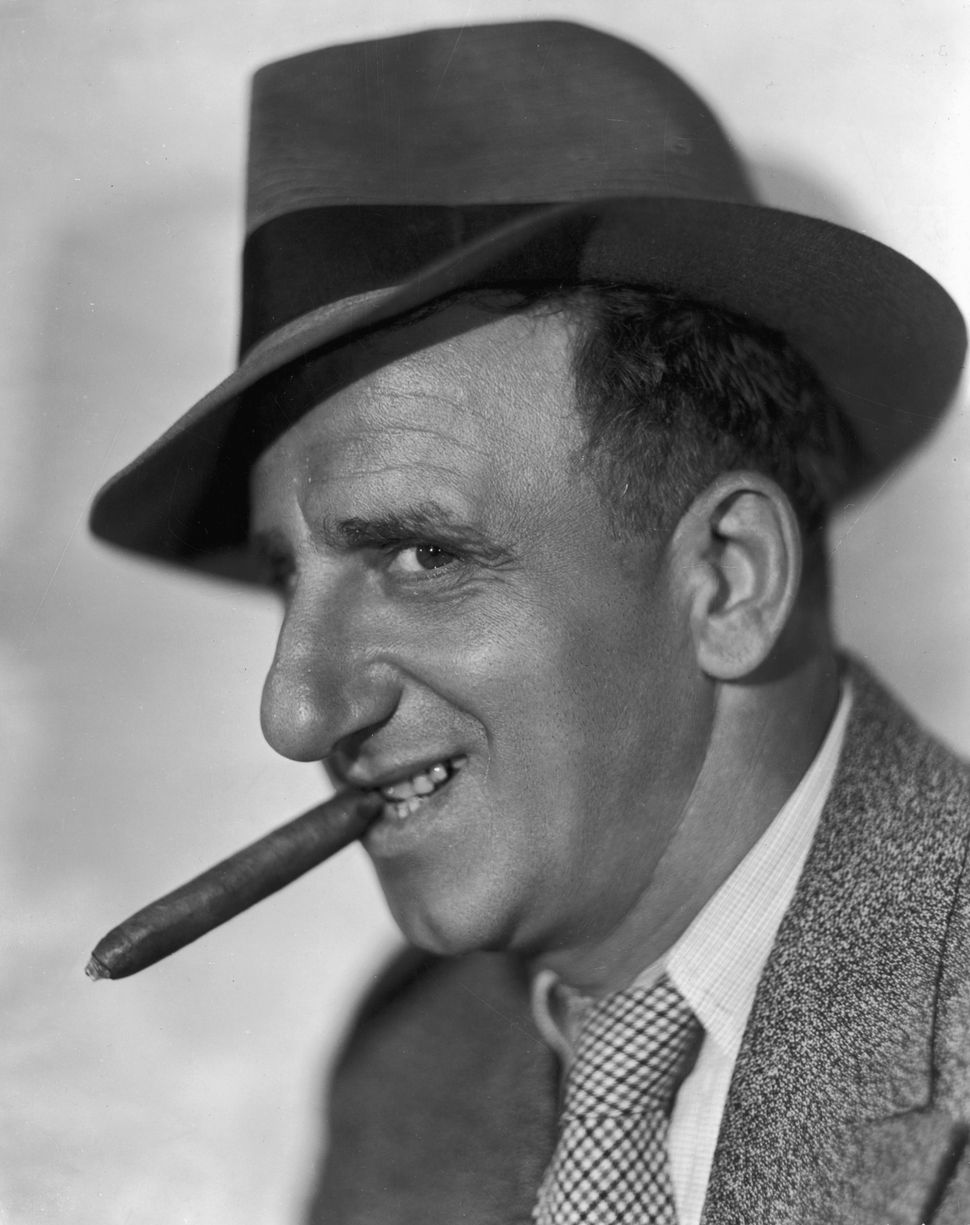 This year marks the fortieth anniversary of the death of the entertainer Jimmy Durante (1893-1980), whose artistry was linked with Yiddishkeit. Durante’s nickname, Schnozzola, is an American adaptation of the Yiddish slang term schnoz for nose. An able jazz pianist and endearing comedian, Durante was also capable of poignant singing. When he performed the German Jewish composer Kurt Weill’s “September Song” on a live 1954 broadcast, Weill’s widow Lotte Lenya asserted in a memoir that she “could barely hold back [her] tears.”

Born on New York’s Lower East Side to a Catholic family from Salerno, Italy, Durante’s vocal stylings appealed to many Jewish listeners, including the composer Marc Shaiman, who included his recordings in the screen comedies “City Slickers,” and “Sleepless in Seattle,” the latter directed by Nora Ephron.

As much as his rough-edged, intensely musical vocalizing, his appearance drew fans. Peggy Shinner, an American essayist of Russian Jewish origin wrote:

“Until recently, I thought Jimmy Durante was Jewish… I thought he was Jewish because of his nose. I was disappointed to find out that he wasn’t. I’d wanted him to live up to my expectation of a big-nosed Jew, a lovable wise guy I could claim as one of my own; and if I couldn’t claim him as one of my own, then at least I’d point out that he grew up among the Jewish garment workers of the Lower East Side, as if, ridiculously, their Jewishness and their nozzles could somehow have rubbed off on him.”

By jesting with good humor about his proboscis, Durante may have been seen by some Jews as deflecting schoolyard taunts about their own appearance. The South African Jewish anti-apartheid activist Stephanie Urdang recalled about her father’s “stereotypical Jewish nose, which he was quick to joke about, laughing as he sang along to his LP recordings of Jimmy Durante, the Schnozz, the American comedian renowned for his large proboscis.”

The insult comic Don Rickles once heckled Durante, who was in the audience at the Slate Brothers nightclub in Beverly Hills: “Take off your hat, Jimmy. It’s not a Jewish holiday.” Durante’s ever-present fedora, Rickles mockingly implied, signified allegiance to the Orthodox community.

If Durante’s nose made him a landsman for some Jewish audiences, others retained a more critical view, like Lennard Davis a specialist in disability studies who confessed that during his childhood, his father seemed “grotesque,” with a nose that reminded him “of Jimmy Durante; his baldness did too.”

A combination of amusement and derision was also heard from the conductor George Szell, notorious for anti-Semitic jibes about colleagues, despite his Hungarian Jewish roots. According to his biographer Marcia Hansen Kraus, Szell nicknamed his protégé, the American Jewish pianist Leon Fleisher, “Schnozzola.”

Similarly, a Harman-Ising animated cartoon from 1933, “Bosko’s Picture Show,” produced by Leon Schlesinger, featured a caricature of Adolf Hitler, brandishing an axe, chasing a giant-nosed Durante. In the faux-newsreel shot in “Pretzel, Germany” a title reads “Famous Screen Lover on European Vacation” as Durante repeats the phrase “Am I mortified!” A narrator concludes: “And Schnozzle leads by a nose.”

Perhaps in part due to such allusions, Durante felt solidarity with Jews. In July 1943, he participated in an Emergency Conference to Save the Jewish People of Europe, alongside Mayor Fiorella La Guardia.

Durante’s unabashed celebration of ethnicity, and winning popularity for looking authentic, likely appealed to Jewish spectators. The sociologist Phil Brown asserted that the humourist Sam Levenson had not Anglicized his name, because “if Gentiles like Danny Thomas and Jimmy Durante didn’t change their noses, [Levenson] could stick with his inheritance.”

In terms of potential inspiration from Jewish wits, Durante’s song from 1931 that begins, “Did you ever get the feeling that you wanted to go/ But still had the feeling that you wanted to stay,” may respond to the indecisive “Hello, I Must Be Going” by the Jewish songwriters Bert Kalmar and Harry Ruby, sung by Groucho Marx in “Animal Crackers” (1930).

A closer brush with Judaica appears in “Strictly Dynamite” a 1934 movie in which Durante’s Cro-Magnon character puzzles over the French Jewish philosopher Henri Bergson’s “Laughter” The sight gag of Durante stumbling over invented vocabulary, purportedly from this abstruse work, may have been concocted by Nugent, who co-authored “The Male Animal,” a lampooning of American anti-intellectualism.

Yet Durante’s most enduring contact with Yiddishkeit was through friendships with such colleagues as Eddie Cantor and Al Jolson, as Michael Alexander’s “Jazz Age Jews” observes. Despite Cantor and Jolson’s well-known asperity, Durante remained sweet-natured with all, “judging everyone favorably,” as the Mishna, Pirkei Avot, 1:6 advises.

Even closer were his rapports with two Jewish friends and performance partners in his comedy trio, the singer Eddie Jackson and soft-shoe dancer Lou Clayton (born Finkelstein; 1890-1950). Their unfettered antics prefigured such later Borscht Belt entertainers as Jerry Lewis and Danny Kaye.

Jackson (1896-1980) was born in Brooklyn to a Russian Jewish family whose name had been truncated to Jacobs by his father. In the early 1920s, he met Durante who was all-night pianist at The Alamo, a Harlem boîte where he was featured after performing in a racially integrated band around the time of World War I.

As Durante’s biographer David Bakish indicates, Jackson’s persona as a “high-silk-hat cakewalker and baritone” remained unaltered over the years.

Echoes of the rough-and-tumble mayhem of their nightclub act may be seen in a 1955 TV variety special. When a drummer takes an overextended solo, Durante hurls the top of his upright piano at the offending musician. Yet unlike Borscht Belt tummlers whose interactions with audiences could sour, Durante retained the air of a blessed innocent with childlike glee.

In a live broadcast from Las Vegas in 1955, Jackson joined Durante onstage to perform “Every Street’s A Boulevard (In Old New York)” a postmodern tune in the Jolson style, but first performed in a 1953 Broadway musical, after Jolson’s death. Written by Jule Styne, born Julius Stein, and Bob Hilliard (born Hilliard Goldsmith), the song is galvanized by Jackson’s bug eyed, wide-mouthed delivery that made him a model for Hollywood animators, who possibly based Michigan J. Frog, a cartoon song-and-dance creature from the Merrie Melodies film series, on him.

Jackson’s swollen-chested strut and series of kicks, with hand claps and gleaming glances at the audience, were accompanied at every step by Durante at the keyboard. The intense vibrancy is out of scale, as much of a caricature as Michigan J. Frog. Indeed, from certain camera angles, Durante looked more like Popeye than Popeye himself. On the cover of a 1959 recording by Eddie Jackson and His Dixielanders Jackson’s overplayed grimace is likewise cartoonish in essence. Yet their performance style has lasting verve, with each syllable of a song counting as a recollection of the era before microphones.

What was Jewish about Jimmy Durante? More than you might think.