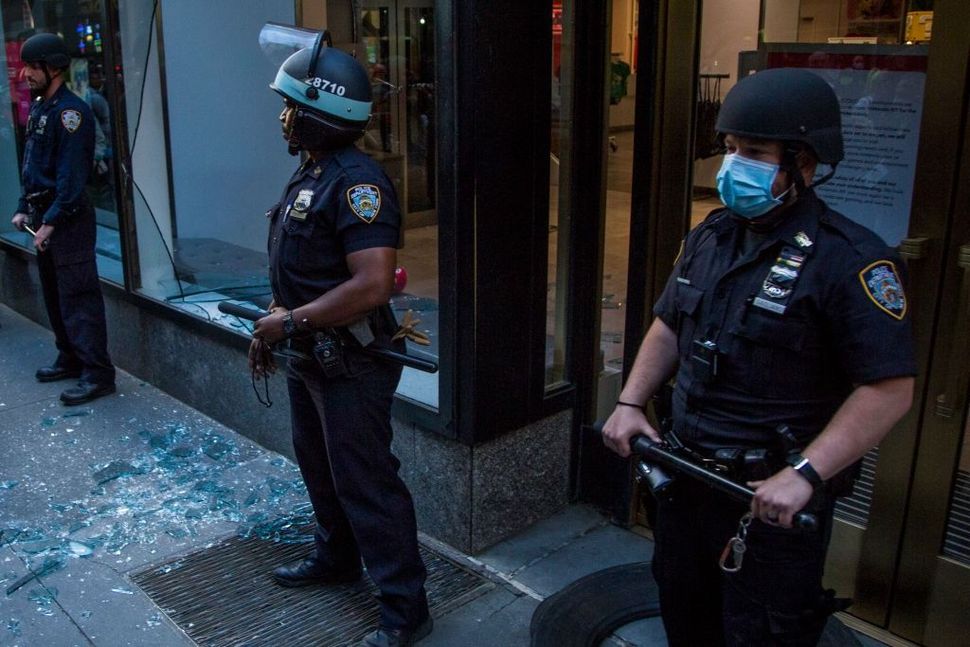 As cities across America contend with nightly curfews, many of us are likely unaware that the word “curfew” originates in medieval French and has resonances that run through centuries of Jewish history. The latest news can seem increasingly medieval — from plague to authoritarianism to the public murder of minorities — and the sudden ubiquity of the word curfew aptly reflects the Middle Ages, even while it flashes into our lives via smartphone text.

The Middle English word curfew comes from the Anglo-French coverfeu — the signal to cover the fire in the hearth. Then as now, “curfew” and “fire” are related concepts.

“During the Middle Ages, houses in European towns were often made of wood and were close together, and fires could quickly spread from house to house,” according to the Merriam-Webster Dictionary.

“To prevent this, people were required to put out or cover their hearth fires by a certain time in the evening. A bell was rung as a signal when the time had come. In early French this signal was called coverfeu, a compound of covrir, meaning “to cover,” and feu, “fire.” For word nerds, feu or fire originates from the Latin focus or hearth. Another meaning of focus is altar.

“Even when hearth fires were no longer regulated, many towns had other rules that called for the ringing of an evening bell, and this signal was still called coverfeu,” says Merriam-Webster. “A common coverfeu regulation required people to be off the streets by a given time.”

Here we are, also required to be off the streets at a given time.

As Benjamin Ravid writes in “Venice and Its Minorities,” the curfew in the Venice Ghetto was enforced by guards.

In 1516, “the senate required all Jews to live together, segregated and enclosed on the island in Cannaregio already then known as the Ghetto nuovo (the new Ghetto) because of its association with the municipal copper foundry previously located across the canal, “il ghetto” or “getto” from gettare in the sense of pouring or casting metal, whose area came to be known as the Ghetto Vecchio (the old Ghetto).”

“To prevent Jews from moving about the city at night, gates were erected at the two bridges leading out of the Ghetto nuovo. Christian guards were to open these two gates in the morning when the Marangona bell sounded and close them, initially at sunset but then slightly extended to one hour after dark in summer and two in winter; only Jewish doctors, and later merchants, were routinely allowed outside after curfew time, while permission to do so was occasionally granted upon special request to other individuals, but almost never — with the exception primarily of a few doctors — was a Jew authorized to stay outside all night.”

The Nazis infamously revived the concept of the ghetto, as well as the idea of a curfew for ghetto residents. Once again, the entrances to the ghetto were guarded.

As the United States Holocaust Museum website explains: “Many of the ghettos were enclosed by barbed-wire fences or walls, with entrances guarded by local and German police and SS members. During curfew hours at night the residents were forced to stay inside their apartments.”

And what about those not subject to curfew? There are the guards — then and now. The police — then as now. And then there are the onlookers. “One of the most disturbing things to me is the other officers, the other officers who stand around,” St. Paul Mayor Melvin Carter told the PBS News Hour, referring to the other three policemen who were present during the murder of George Floyd.

I was reminded of Mayor Carter’s remarks while reading a bit of history about ghettos in Poland during the Holocaust that I did not fully process before. Stuck at home in a city where all public transportation has been shut down at night, I found myself reading about Polish trolley lines.

“In the Polish cities of Lodz and Warsaw,” according to the U.S. Holocaust Museum, “trolley lines ran through the middle of the ghetto. Rather than reroute the lines, workers fenced them off, and policemen guarded the area to keep the Jews from escaping on the trolley cars. The passengers from outside the ghetto used the cars to get to work on weekdays, and some rode them on Sunday outings just to gawk and sneer at the ghetto prisoners.”

Yes. Polish commuters saw it all, just as the three other police officers were certainly close enough to see what was happening to Floyd.

A a curfew is not just about covering a fire, and preventing the burning of neighboring houses, as the dictionary tells us. History tells us the same thing. The United States is at a crossroads, and the desire to control this American conflagration is right there in the language.