Should we really keep comparing Trump to Hitler? 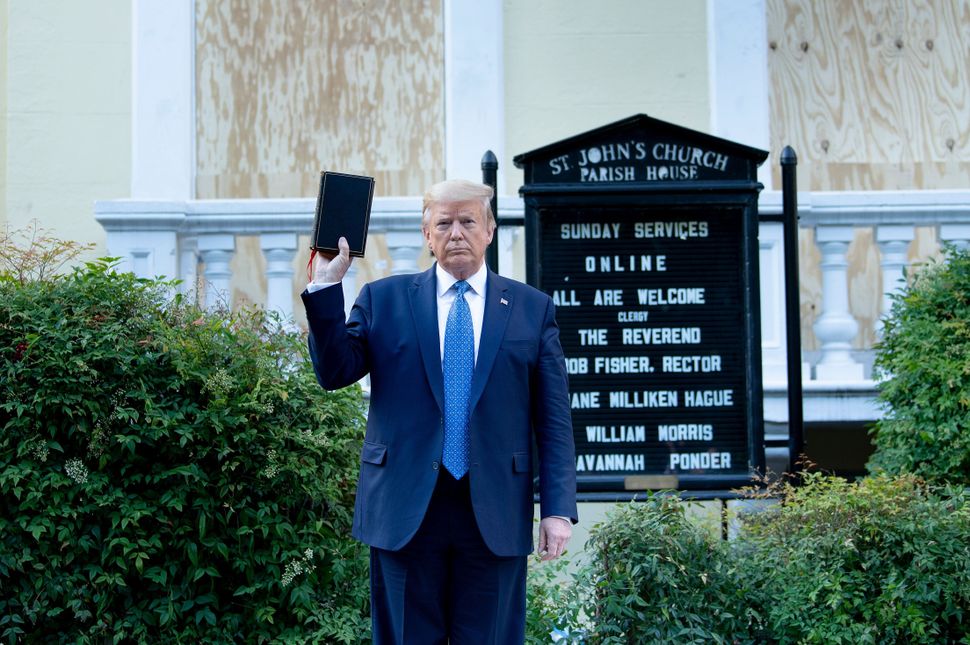 Donald Trump posing with a Bible in front of St. John’s Church on June 1, 2020. Image by Getty/BRENDAN SMIALOWSKI/Contributor

Yesterday, a few hundred feet from the White House Rose Garden, Donald Trump’s Justice Department stage-managed a show of force against his own citizens. Today, the president is being compared to Adolf Hitler — again.

Before curfew went into effect at 7 p.m. on Monday, peaceful protesters at Lafayette Square were met with police in riot gear unleashing tear gas canisters and rubber bullets while mounted cops charged ahead under the orders of Attorney General William Barr. As cameras held a live view of Trump’s podium, the not-so-distant pops of flash grenades could be heard. And then, the president threatened martial law in a move some have found reminiscent of an infamous 1933 power grab.

Throughout his tumultuous presidency, Trump has been likened to Hitler. His declaration of a state of emergency to move ahead with his border wall has been compared to the Reichstag Fire, the arson attack that prompted the suspension of German civil liberties that paved the way for Hitler’s dictatorship through the Nazis’ claim that the crime was evidence of a communist plot. When speaking of the 45th president, that event has been mentioned frequently.

While stopping short at declaring a new state of emergency on Monday, Trump’s rhetoric, in which he called himself “your president of law and order” and threatened military intervention if American governors could not contain rioting, drew comparisons to Hitler’s strong man talking points, with one user referencing a spurious quote from the dictator.

In 1933, in response to the Reichstag fire, Hitler enacted a Nazi version of martial law.

Now, 87 years later, Trump, using the excuse of protests is threatening to declare a nat’l emergency in order to declare martial law, and unleash the US military against the American ppl.

Flirting with mobilizing the military (which would require the invocation of the Insurrection Act last put into effect during the 1992 Los Angeles riots) was not the only way Trump has been said to echo the Fuhrer. After his remarks, Trump mentioned that he was off to pay his respects “to a very special place.” It soon became clear that the police had dispersed protesters to allow for a photo opportunity outside of St. John’s Church where Trump held a Bible aloft. Many posted a doctored photo of Hitler in a similar pose, photoshopped to add a Bible to the Nazi leader’s hand. The clarification surrounding the original Hitler photo was enough to get words “The Hitler” to trend on Twitter.

Hitler held the Bible & followed it with gas chambers.
Trump is following it with tear gas.#DictatorTrump pic.twitter.com/8IKD7RbnRH

Racist, small minded, cowardly #DictatorTrump trump said: “I am dispatching thousands & thousands of heavily armed soldiers, military personnel & law enforcement officers” then walked to a church after gassing & shooting his citizens & held up a Bible to have his hitler photo op pic.twitter.com/NmLMCoZnOs

These analogies are in some ways specious — and, in the instance of the Bible pic and quotation, counterfeit.

The president’s executive power still has its limits and many are skeptical he can make good on his threat to foist the military on cities that don’t want it there. Trump’s level of autonomy is not at the level of Hitler in 1933, when the Enabling Act gave the chancellor power to pass laws without the Reichstag’s approval. Congress is still around and Trump can’t override it in many instances — much as he may want to.

Did Trump also join the ranks of Hitler as a bunker dweller last week? Sure, but we know that the outcome and circumstances were a bit different.

Beyond that, while Trump has made use of dog whistles for various minorities — recently using the word “thugs” to describe protesters — his dogma is less predicated on any involved racial theory than Hitler’s. We’re in Godwin’s law territory, where we’re losing the argument by missing what makes Trump distinct: He’s not an ideologue, but a chest-beater, and his penchant for reality TV moments is gaudy and transparent when matched against Nazi propaganda. One pundit joked that Trump’s filmed journey to St. John’s was a “Triumph of the Will” moment, but to most observers his choreography had the impression of a failed state.

But it is interesting that a book should be at the core of many of these comparisons. For one thing, Hitler didn’t lean too much into piety, instead emphasizing “Aryan” culture and despising much of the Christian tradition. But while many have speculated about Trump’s own knowledge of the Bible, it’s been reported that he may have read a book with Hitler’s words.

In a 1990 Vanity Fair profile of Trump, Marie Brenner asked Trump about a rumor that he kept “My New Order,” a collection of Hitler’s speeches on a cabinet near his bed. Trump admitted that Marty Davis, a Paramount executive whom he wrongly identified as Jewish, had given him the book.

After the admission Trump was more elusive, saying that if he had the speeches, he would never read them.

“Trump is no reader or history buff,” Brenner concluded. “Perhaps his possession of Hitler’s speeches merely indicates an interest in Hitler’s genius at propaganda.”

Editor’s note: This article originally had as its lead image the diptych showing a photograph of President Trump holding up a Bible alongside one of Hitler that was doctored to add a book in his hand in similar fashion. That lead image has been removed to protect against the spread of misinformation; the diptych is included in the body of the article, alongside an explanation of how the photo was doctored.

Correction June 2, 2020 4:10 PM: An earlier version of this article stated that Trump was behind the dispersal of the crowd by the police. A Washington Post report now states that Attorney General William Barr gave the order personally.

Correction June 2, 2020 5:18 PM: An earlier version of this article presented a tweeted quote alleged to be from a Hitler without commentary. We have updated the article to reflect that the quote was not Hitler’s. We regret the error.

Should we really keep comparing Trump to Hitler?