Why Jews loved Charles Dickens — and even Fagin 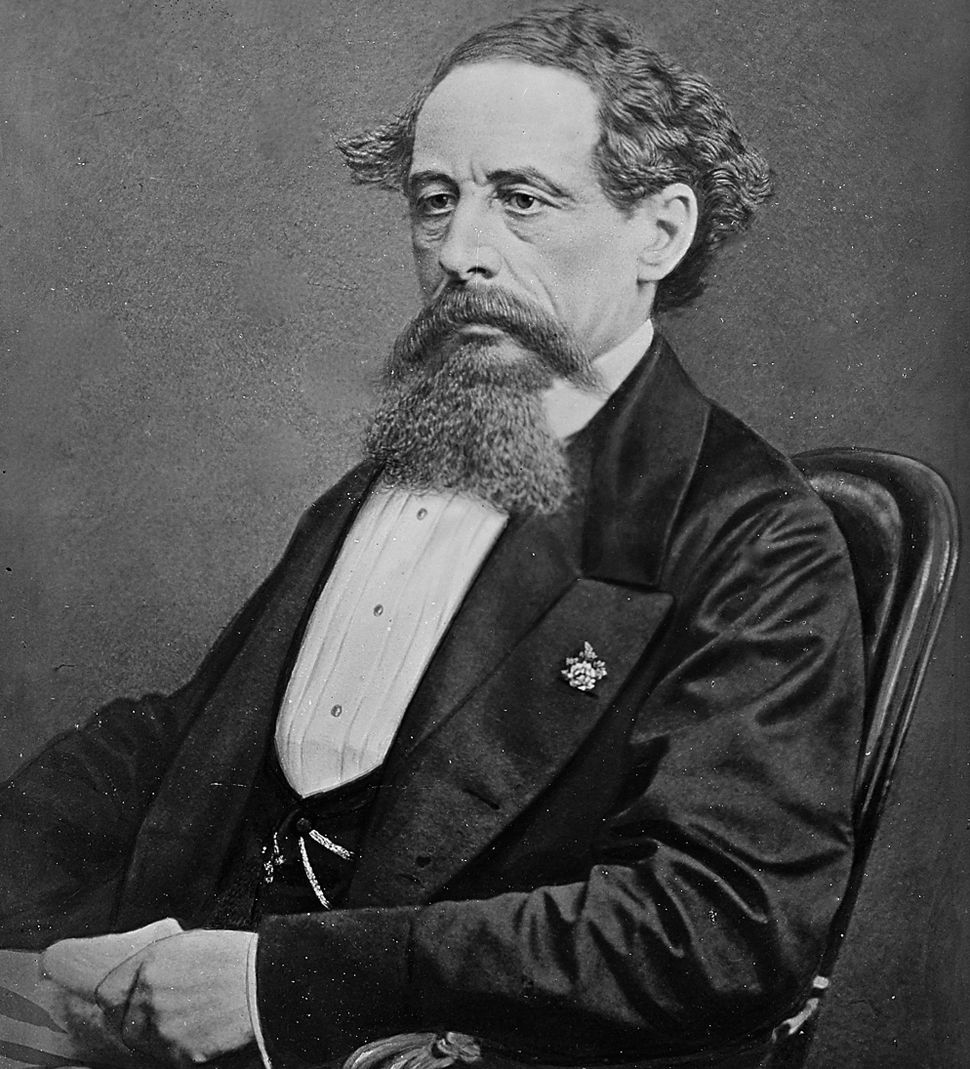 When Sholem Aleichem’s stories were translated into Russian, renowned critic Alexander Amfiteatrov likened him to Charles Dickens. The great Yiddish writer balked at the comparison.

“He imagines that our literature has the amplitude of English literature and can produce a Dickens!” Sholem Aleichem wrote to his son-in-law, Y.D. Berkowitz. “Were Amfiteatrov to spend even a short time in Warsaw and learn something about the source of our literature, see our trivial penny papers, our writers who grovel for a small advance, he would look only for financial motives in my writing rather than compare me to Dickens.”

Still, the writer understood the nature of the analogy — and so did most educated secular Yiddish-speaking Jews. Dickens, who died 150 years ago today, was an immensely popular writer in Yiddish translation around the time Yiddish was developing its own secular literary tradition. While Sholem Aleichem didn’t believe his work to have the historical precedent, or economic rewards, to label him a Yiddish Dickens, his fiction and that of his contemporaries was undeniably stamped by Dickens’ influence and so was Yiddish culture as a whole. Of non-Jewish authors, Dickens was singularly admired by turn-of-the-century Jews for his humanism as well as his craft.

As Yiddish-to-English translator Goldie Morgentaler notes in her 2017 paper “When Dickens Spoke Yiddish,” the novelist was first translated into Yiddish in 1894 (almost a quarter of a century after his death of an apparent stroke) and new translations continued until 1939 on the eve of the Second World War. Dickens was required reading in the secular schools in the Central Yiddish School Organization, or TsiSho, in Poland. So, middle-school-aged kids in Bund-organized classrooms read Dickens, too.

But these students weren’t alone. The three writers who heralded the birth of modern Yiddish literature — Mendele Mokher Sforim, I.L. Peretz and Sholem Aleichem — read Dickens in Russian and used his storytelling as a template as they built their own canon. They were great Anglophiles, Morgentaler writes, and believed that England, where Benjamin Disraeli had served as prime minister, was enlightened, democratic and above anti-Semitism.

This is a curious belief, particularly given Dickens’ characterization of Fagin, the hook-nosed ringleader of a band of child thieves in “Oliver Twist.” Yet, that book did little to damage Dickens’ following among Yiddish readers. “Oliver Twist” was published in at least six different Yiddish translations, including a 1927 Warsaw edition by Yitskhok Daytsher, an active Bundist and prolific translator of Dickens.

Even though some of the earliest translations arrived during a time of anti-Semitic pogroms in Ukraine, Morgentaler writes that Fagin’s Jewishness “becomes muted” when every other character is speaking Yiddish. In Dickens’ text, Fagin is regularly referred to as “the Jew,” but in Yiddish, this phrase loses its prejudicial edge, since “der yid” is an in-group classification of an individual, the name for a Jew from a language used nearly exclusively by Jews. Morgentaler contends that presenting the story in Yiddish allowed the Jewish reader to subliminally identify all characters in the work — good or bad — as Jews. In that context, Fagin appears as a villain who happens to be Jewish rather than a villainous Jew. And in one translation, mentions of Fagin’s Jewish background are removed altogether.

But some Jews’ antennas still tingled when they approached Fagin. While Yiddish managed the magic trick of making the mendacious and contemptible character less problematic, the same was not true when he appeared in Russian.

Sholem Aleichem once raised the issue of the character in a letter to the editor of a Russian journal, lamenting that Dickens furthered Jewish suffering through his fiction. “How can one understand that when Charles Dickens, the great humorist, to whom I have been falsely compared, needed to describe a thief who founds a school for thieves, he could find no other candidate in all of England but a Jew,” he wrote, but added, somewhat incredibly, “Of course, it would be great foolishness to accuse such a good soul as Dickens of anti-Semitism.”

This is, of course, naive, mistaking Dickens’ regular subject of the voiceless — orphans, the poor — for an immunity to a very English brand of the Oldest Hatred.

English Jews did not always grant Dickens the benefit of the doubt. In 1863, Eliza Davis, wife of the Jewish banker who purchased Dickens’ Tavistock House, wrote to the author, “It has been said that Charles Dickens, the large-hearted, whose works plead so eloquently and nobly for the oppressed of this country has encouraged a vile prejudice against the despised Hebrew.” Comparing Fagin unflatteringly to a recent production’s sympathetic treatment of Shakespeare’s Shylock, Davis wrote, in a letter “Fagin, I fear, admits of only one interpretation; but [while] Charles Dickens lives the author can justify himself or atone for a great wrong.”

Dickens appears to have tried to address Davis’ concern by creating the character of the selfless Mr. Riah in “Our Mutual Friend.” Riah, as Louis Shaffer noted in a 1951 piece for the Forverts, was a paragon of virtue, but many critics thought the elderly money-lender was an over-correction. G.K. Chesterton called the saintly Jew “needless and unconvincing.”

In the late 19th century through to the early 20th, Dickens was regarded as an essential novelist and foremost humanist and many notable Yiddish writers produced translations of his work. B. Gorin, the Forverts’ onetime theater critic whipped up “Dovid ben Dovid Koperfild” in 1894 and Itsik Kipnis delivered his own translation of that bildungsroman in the 1920s in the Soviet Union. Esther Kreitman, sister of Forverts contributor and Nobel laureate Isaac Bashevis Singer translated “A Christmas Carol,” rendering Tiny Tim’s closing line as a more familiarly Jewish “God bless us each alike and all as one!” ending in “Amen.” (Dickens’ Christmas stories were very popular among the Jews.)

Dickens’ oeuvre spoke to the Jewish socialist’s concern for the poor in an age of industrialization, and references to the author’s work appeared frequently in the Forverts. Founding editor Abraham Cahan’s story “The Imported Bridegroom,” published in our paper in 1909 presents a character named Flora reading Dickens’ “Little Dorrit” (“di kleyne dorit”) and sports writer Joe Grayson likened legendary restaurateur Toots Shor to a character from “Dombey and Son.” In 1914, The Forverts offered $1 collections of Dickens’ work from its East Broadway office as a gift for recent public school grads.

Yet, while this paper serialized translations of such authors as Victor Hugo and Guy De Maupassant, Dickens did not receive that treatment. Perhaps he didn’t need the help. In 1934, Sholem Asch, a successor to I.L. Peretz and Sholem Aleichem, addressed the English PEN Club in London by hailing the city’s native son. “Every writer who wishes to be true to his mission and to the discipline of art must regard himself as a student of the great teacher Charles Dickens,” Asch said, praising Dickens’ empathy for the common man.

Since then Jews, have managed to take Fagin back. In 1960, the New Theater in London debuted Jewish composer Lionel Bart’s “Oliver!” which cast fellow landsman Ron Moody in the role of a sympathetic Fagin, giving him a Klezmer-style solo. Moody reprised the part in the 1968 film. More controversially, another Jew took a turn adapting “Oliver Twist” in 2005 — Roman Polanski. David Copperfield gave illusionist David Seth Kotkin his stage name, J.D. Salinger the opening line of “Catcher in the Rye” and fans of the Wizarding World their Jewish Harry Potter.

As a major writer, Dickens is something of a minor, if outspoken, anti-Semite. But his work is still read not for what makes it objectionable, but what speaks to a common humanity and empathy for the disenfranchised. Of the nearly 1,000 characters Dickens created, Fagin is only one (albeit odious) example and one he tried — if failed — to make up for. In the same way that “The Merchant of Venice” doesn’t negate the canon of Shakespeare, Dickens’ work will continue to be read — and translated — by Jews.

In 2018, after months of serialization, Barry Goldstein published a Yiddish translation of “The Pickwick Papers” (“Di pikvik papirn”), thus reviving a long dormant trend that was stalled in 1939 by a world war that eradicated much of the world’s Yiddish speakers. With the language now riding an unprecedented revival, there are likely more to come. In the meantime, the Yiddish Book Center has some of the older translations available online. At the top of the list, transliterated and alphabetical, is “Aliṿer Ṭṿisṭ,” which many remain the least objectionable way to encounter one of the more noxious Jewish characters in fiction.

Correction June 10, 2020: A previous version of this article named Isaac Deutshcer, the biographer of Trotsky and Stalin, as a translator of “Oliver Twist.” It was in fact Yitskhok Daytsher who translated that work, as well as “David Copperfield” and “A Tale of Two Cities.”

Why Jews loved Charles Dickens — and even Fagin