In ‘Gone With the Wind,’ a complicated Jewish subtext 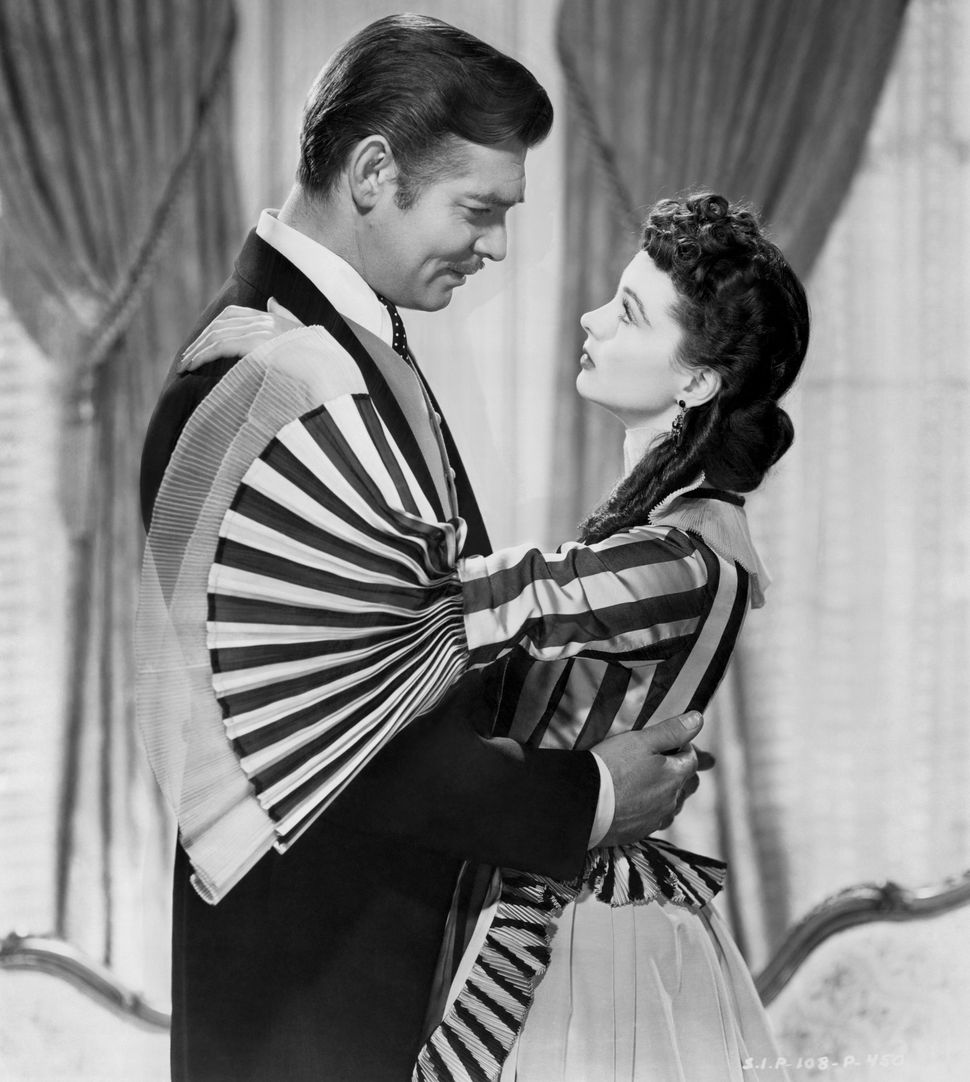 Gone With the Wind Image by Getty Images

The news that HBO Max streaming service has temporarily removed “Gone with the Wind” from its library to be refurbished with historical information and a “denouncement” of its ethnic and racial prejudices raises the question of how the film’s Yiddishkeit influenced this content.

The 1939 film based on Margaret Mitchell’s novel had Jewish elements, starting with its “Tara Theme” on the soundtrack. Written by the Austrian Jewish composer Max Steiner (1888-1971) the melody, according to music historian Jack Gottlieb contained parallels to a tune written 15 years earlier for the Yiddish theater.

Composer and Forverts contributor Joseph Rumshinsky (1881–1956), born outside Vilna in Lithuania, was one of the leading songwriters of America’s Yiddish theater, alongside Sholom Secunda. Gottlieb notes that “there is a correlation” between Rumshinsky’s 1924 love duet “Mayn Goldele” (My Goldele) from his operetta “Di goldene kale” (The Golden Bride) and “Tara’s Theme.”

More overt were attempts that the Pittsburgh-born producer David O. Selznick made to ward off obvious racist themes in Mitchell’s book. In January 1937, in one of his memos to screenwriters, Selznick advocated eliminating the book’s explicit mention of the Ku Klux Klan. Referring to the term Kleagle, a KKK officer who recruits new members, Selznick added about a rejected plan to remake another racist film, “The Birth of a Nation”: “Of course we might have shown a couple of Catholic Klansmen, but it would be rather comic to have a Jewish Kleagle.”

Selznick added, “I do hope that you will agree with me on this omission of what might come out as an unintentional advertisement for intolerant societies in these Fascist-ridden times.” Ben Hecht, one of the screenwriters of “GWTW,” was ultra-aware of his status as an American Jew and the historical context that the film represented.

Yet any message linking the fates of minorities in America and Europe was likely compromised when Selznick fired the Jewish director George Cukor three weeks into filming and hired Victor Fleming, who was reportedly given to anti-Semitic outbursts, with no evident sympathy for minorities. Of Hungarian Jewish ancestry like Cukor, the actor Leslie Howard was uncomfortable with the film for different reasons, judging his role of Ashley Wilkes to be insipid.

A more forthright message of racial harmony, even if timidly stated, was heard in the actress Fay Bainter’s presentation speech at the 12th Academy Awards in February 1940 to Hattie McDaniel, the African American actress who became the first black performer to win an Oscar.

Bainter commented that the award to McDaniel “opens the doors of this room, moves back the walls and enables us to embrace the whole of America – an America that we love; an America that, almost alone in the world today, recognizes and pays tribute to those who’ve given their best, regardless of creed, race or color.”

These idealistic words, belied by the fact that the ceremony was held in a segregated hotel that only grudgingly admitted McDaniel to collect her award, portray America as a beacon of freedom compared to Fascist Europe.

In addition, the sheer overabundance of “GWTW,” the novel and film, appealed to some European Jews already in the throes of hardship. In 2015, the English Jewish writer Neil Gaiman described how his cousin Helen survived in the Warsaw Ghetto where books were illegal; she hid a Polish translation of “GWTW” behind a loose brick in a wall, using it as a educative text for younger Jewish girls.

To these imperilled Jews, according to Helen, “for an hour every day, those girls weren’t in the ghetto — they were in the American South; they were having adventures; they got away.”

Comparably, the lavish screen adaptation of “GWTW” spoke to a generation in danger from ordeals that they might never survive. And so the French Jewish filmmaker Jean-Pierre Melville (born Jean-Pierre Grumbach) included a scene in his screen drama of the Resistance, “Army of Shadows” (1969), adapted from a book by the Russian-born Jewish writer Joseph Kessel, in which two anti-Nazi combatants, on furlough in London, spend what might be the last hours of their lives watching the Hollywood epic “GWTW.”

Ultimately, for all the enduring weaknesses of the source novel and film, their societal impact was so widespread that they affected most people of their era, including Jews. Mally Dienemann was the wife of a German rabbi who escaped to Tel Aviv after twice being imprisoned in concentration camps. Her husband died just days after reaching safety, leading her to write a text later anthologized in “Jewish Responses to Persecution: 1933–1938”

“Now I’m sitting here in Palestine on Mount Canaan without my beloved life partner, without my circle of friends… I am truly “Gone with the wind” here. [in English in the original] Gone with the wind? And yet, despite the many hours of despair,… in the depths of my soul an absolutely unshakeable faith remains, impervious to all the terrible things that have happened to people.”

For such survivors and resistants, “GWTW” represented a symbol of American abundance – and Scarlett O’Hara-like dauntlessness – when the USA still offered a degree of hope for a better world. Yet as the American Jewish political scientist Michael Rogin pointed out, “GWTW” also “provided the scaffolding for American film history…The entire cycle is played out inside white supremacy” along with the racist screen narratives “Uncle Tom’s Cabin,” “The Birth of a Nation,” and “The Jazz Singer.”

Selznick doubtless hoped for better, as film historian Steve Wilson suggests. In a 1938 letter to Rabbi Barnett Brickner, chairman of the Social Justice Commission of the Central Conference of American Rabbis, who cautioned him about the potentially destructive content of “GWTW,” Selznick replied: “I hasten to assure you that as a member of a race that is suffering very keenly from persecution these days, I am most sensitive to the feelings of minority peoples.”

The same might have been claimed by the undisputedly racist Margaret Mitchell, whose parents, according to historian Anita Price Davis actively protested the lynching in 1915 of Leo Frank, a Jewish factory superintendent unjustly convicted of murdering an employee in Atlanta.

Yet despite these and other efforts, “GWTW” all too readily appears today like a bloated apologia for an era of lethal injustice. Its multifaceted content, akin to Hollywood’s diversity, was expressed in a 1947 article by Hattie McDaniel in the “Hollywood Reporter” mentioning Saul of Tarsus, a Jewish follower of Jesus who became Paul the Apostle, teaching the gospel to the first-century world. McDaniel wrote, “An utterance of a first century Jewish scholar, “I am became all things to all men,” can very aptly be applied to Hollywood — film city of the world.” In 1 Corinthians 9:22 of the Christian Bible, Saul/Paul claims, “I am made all things to all men, that I might by all means save some.” Would that the same were true of “Gone With the Wind.”

In ‘Gone With the Wind,’ a complicated Jewish subtext