A noshing tour of an eerily quiet Lower East Side 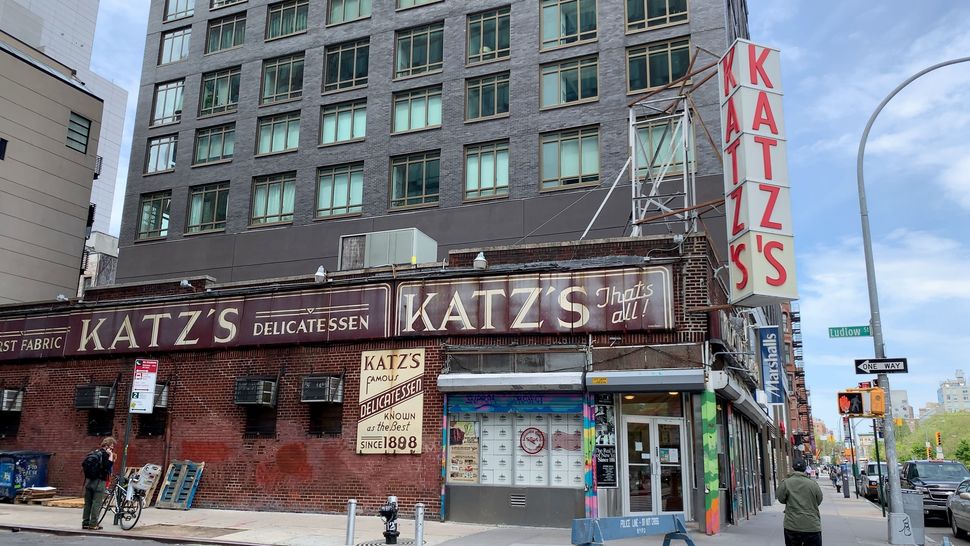 Corner of Houston and Ludlow: The delicatessen as an institution dates back to the German days of the Lower East Side in the 19th century, when the area was known as Kleindeutschland. Image by Jonathan Goldstein

I love ghosts. I became a tour guide to visit the ghosts of the past and share them and their wisdom with my clients.

Few places in New York have so many ghosts as the Lower East Side. Residing among the fusion restaurants, cafes and cocktail bars, the spirits of the many immigrant communities who settled in the neighborhood still have so much to teach us. The buildings themselves — repurposed banks, tenements, and synagogues — are ghosts hiding in plain sight.

A hundred years ago, the Lower East Side was among the most densely populated places on earth, home to preventable epidemics, extreme poverty and constant noise. Until a few months ago, the crowds and noise remained a feature of the gentrified neighborhood.

On a recent trip I took with my son to visit my favorite food stops in the neighborhood, though, it felt eerily quiet.

Travel was the first industry to collapse when the pandemic hit. I suspect it’ll be among the last to recover. Like many others, I’m trying to adapt my work to a virtual new world. So on a recent Thursday, I strapped my 16-month-old daycare-dropout to my chest to shoot a tour of my favorite Lower East Side food stops for a remote audience.

I always start my tour here across the street from the old Forward Building. What better way to tell the story of America’s most iconic Jewish neighborhood than in front of a Beaux Arts tower with a Yiddish word ¬– Forverts –blasted across the façade? 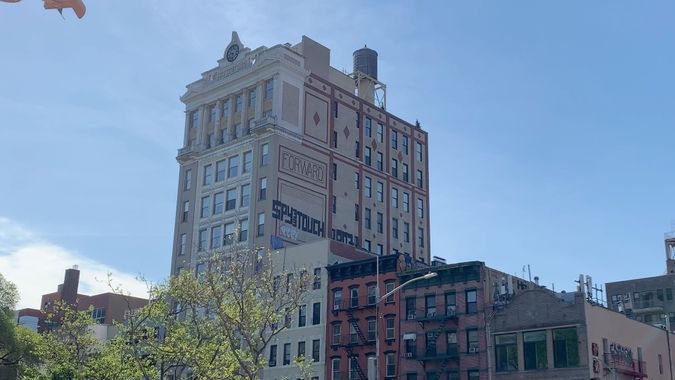 For an immigrant community, the newspaper played many critical functions: its listings helped newcomers find rooms for rent, jobs, and extended family members – all in their native language. The Forward, with its socialist origins, also functioned as an organizing hub for the fight for immigrant rights, workers’ rights, and consumer rights. Marx’s face still appears over the entrance to the building, beckoning political activists. Emma Goldman, Leon Trotsky and Fidel Castro all hung out around here, congregating at the Garden Cafeteria (now a Chinese restaurant) a couple doors down.

Like so much else in the neighborhood, the old Forward building has been turned into condos. I’ve been scolded by residents entering the building hearing me point out to groups the irony that a two-bedroom in a former hotbed of socialism now goes for $2.5 million. Bagel or Bialy: The author and his assistant make an important choice. Image by Jonathan Goldstein

My first culinary stop is at the southeast corner of Essex and Grand, cattycorner from Seward High School, which turned out cultural icons like Estelle Getty, Walter Matthau, Tony Curtis, Jerry Stiller and many more. I’m in front of both the Pickle Guys and Kossar’s Bialys. The streets are empty, though still noisy from trucks plowing down Essex.

Once, this area was part of a pickle district with dozens of shops fermenting cucumbers and other veggies in garlicy salt brine – a common way in the old country for poor peasants to preserve cheap food. Opened in 2003, the Pickle Guys have preserved the tradition for a new generation; the original picklers are all gone from the area. You can still visit the shop today (three patrons at a time) or order online from anywhere in the country. 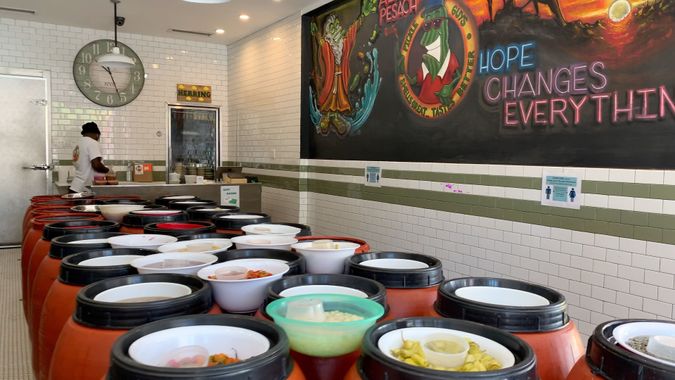 Preserving a Tradition: The Pickle Guys have only been around since 2003. Image by Jonathan Goldstein

As my kid occupies himself with a full-sour, we go over to Kossar’s – open for takeout – to order a bialy and a bagel. I grew up assuming bialys were Italian. Later I learned that the bialy is actually a savory pastry from the city of Bialystock, Poland. Kossar’s is one of the last places in the city doing justice to the bialy, which would have been ubiquitous when the business opened a few blocks away on Clinton Street during the 1930s.

Bagels, America’s favorite breakfast bread, were associated with Jewish peasants in Poland. Boiled before it’s baked, the bagel is another ideal peasant food –a stale one can be reboiled to soften it and then rebaked. Lore has it that the bagel celebrates the victory of Polish King Jan III Sobieski over the Ottomans at the gates of Vienna in 1683 – the ringed shape supposedly represents his stirrup in carb form. Until the Lenders family figured out how to freeze and market bagels to grocers around the country, you could only get them freshly baked in Jewish neighborhoods.

Crossing Delancey Street, we look east at the industrial bridge leading to Williamsburg. Opened in 1903, it was colloquially referred to as the Jews’ Bridge for the immigrants who moved from the Lower East Side to Brooklyn, but would cross the bridge back into Manhattan to visit their favorite deli or synagogue. 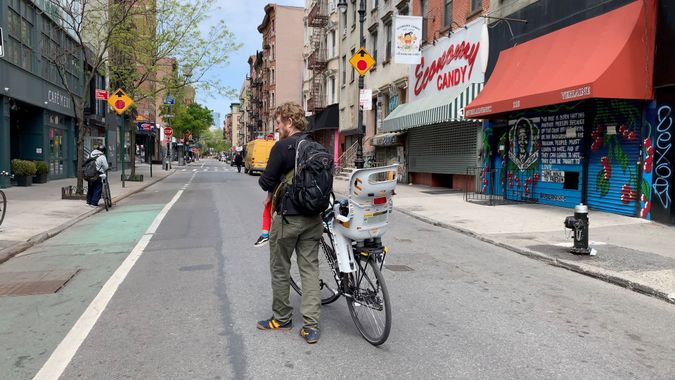 Almost a Candy Museum: The store opened in 1937 as a hat and shoe repair shop with a candy counter, which eventually subsumed the repair business. Image by Jonathan Goldstein

We pass Economy Candy on Rivington Street. The store opened in 1937 as a hat and shoe repair shop with a candy counter, which eventually subsumed the repair business. (Even during a Great Depression, a kid will find a penny for a candy.) I think of it more of a candy museum, with treats long out of style, like candy cigarettes, Fun Dip, and Big League Chew. It also has other assorted paraphernalia to send you back in time, like old records and Garbage Pail Kid cards. The storefront is shuttered during the pandemic but they offer shipping nationwide.

Next stop is Russ and Daughters on Houston Street, the famous house of herring. Family-run for four generations, Russ and Daughters has innovated for the 21st Century with its delightful cafes, one around the corner, and another in the Jewish Museum on the Upper East Side. The store is the last of the “appetizing” tradition – in contrast with the deli, these stores represent the dairy side of kosher, or according to their web site, “the foods one eats with bagels.” It’s doing curbside pickup and delivery during the pandemic. I had put in an order the day prior for matias (a sweet herring), nova, white fish, and some black and white cookies – a dessert with German roots that’s become known as a Jewish American staple. 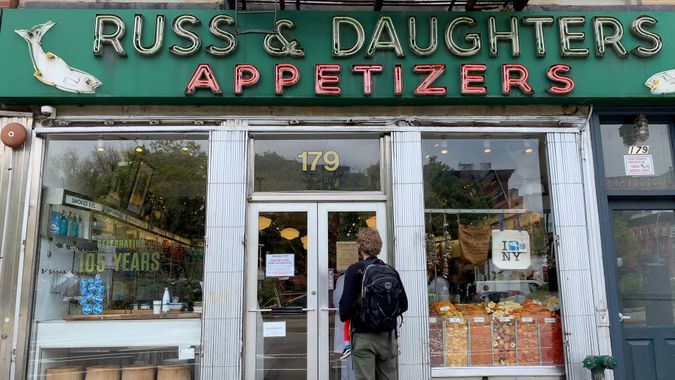 Last of an old tradition: Russ & Daughters is the one remaining “appetizing shop” on the Lower East Side. Image by Jonathan Goldstein

Unfortunately, the kid was less impressed with herring than he was with the pickle.

We wrap up our journey a block down at the big daddy of American-Jewish culinary icons: Katz’s deli at the corner of Houston and Ludlow. Open since 1888, Katz’s is the icon of the Jewish deli, immortalized by Meg Ryan in her classic “When Harry Met Sally” scene. The delicatessen as an institution dates back to the German days of the Lower East Side in the 19th century, when the area was known as Kleindeutschland.

Starting in 1881, Jews fled Tsarist Russia by the millions, and started to buy local businesses, including delis, which became associated mainly with Jews. (My own family had a deli in the Bronx up until Jews left the area en masse in 1969.) 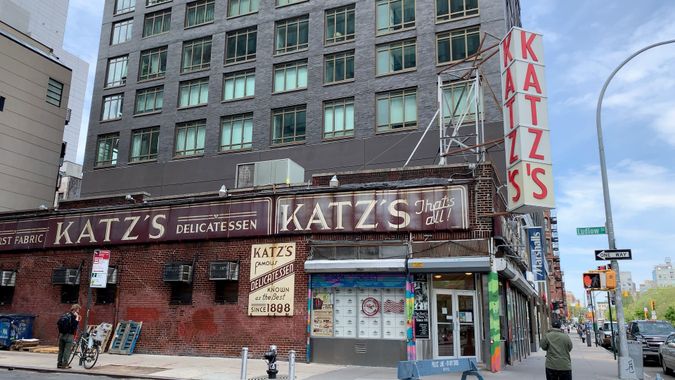 Corner of Houston and Ludlow: The delicatessen as an institution dates back to the German days of the Lower East Side in the 19th century, when the area was known as Kleindeutschland. Image by Jonathan Goldstein

The Jews would add their own twists to the meats – like applying the Romanian pastrama curing method to brisket, as beef was particularly cheap in the land of cowboys. Thus was born the uniquely New York City food that Katz is arguably best known for – pastrami. The deli has survived gentrification in part by selling its air rights for $17 million to condo developers; let’s hope that’s enough to make it through the Covid closures.

Comfort food feels particularly necessary in these uncertain times. New York City has overcome great challenges before; I know it will bounce back. I just hope that when it does, these staples from our history will still be going strong.

A noshing tour of an eerily quiet Lower East Side