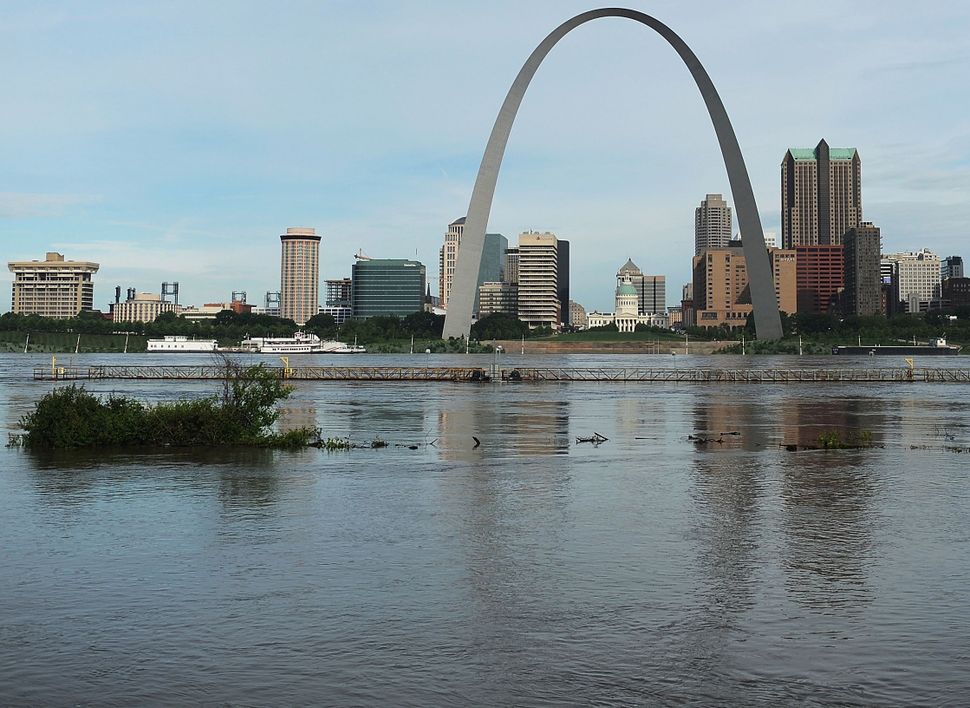 The St. Louis skyline, seen from Illinois on June 6, 2019. Image by Michael B. Thomas/Getty Images

The letter, which was never sent, outlined the painful impact of a series of official actions Saint Louis took against France’s Jews. Focusing on Louis’ expulsion of Jewish moneylenders — one of the few professions Jews had access to — from France, the letter accused the king of having “sold us into daily destruction, death, and decimation at the hands of the rulers of the land.” By seizing the moneylenders’ property, Louis financed two brutal crusades against Muslims in Egypt and Tunisia. His holy war also wreaked cultural destruction within his own kingdom: In 1240, he organized the Disputation of Paris, a debate over the supposed dangers of the Talmud that resulted in the burning of thousands of copies of the sacred texts.

Today, as protests over George Floyd’s death have nationally led to the removal of monuments seen as racist, activists in St. Louis, Missouri, named in 1764 for King Louis IX, are considering a more radical question: Should the city, founded by the French and sold to the United States with the Louisiana Purchase, change its name? 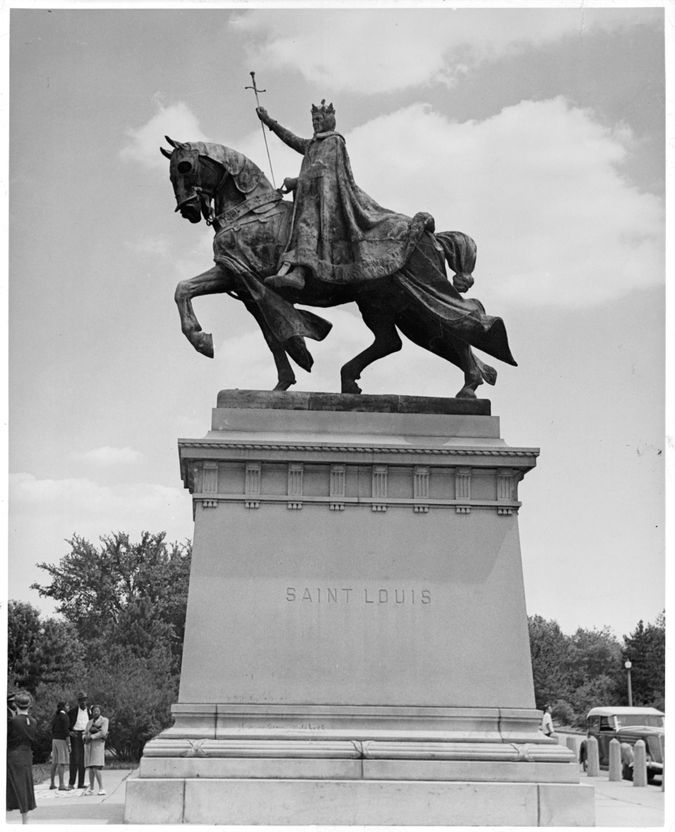 A view of a statue of King Louis IX of France in Forest Park in St. Louis, Missouri. Circa 1950. Image by Lawrence Thornton/Getty Images

It’s a sensitive question. St. Louis is one of the most segregated cities in the country, the center of a metropolitan area where the Black Lives Matter movement gained national attention after Michael Brown’s killing in August, 2014. The city is also home to a powerful Archdiocese, and has a long and rich Catholic history. So while the argument for renaming the city is clear — Saint Louis’s legacy is painful for both Jews and Muslims — some think the effort is a distraction from the pressing issues of racial and economic injustice that have long shaped the region. And others wonder whether focusing on St. Louis’s name might hamper interfaith efforts to address those very same issues.

But to proponents of the idea, having a serious conversation about St. Louis’s name — and removing the city’s most prominent tribute to its namesake, an enormous, sword-wielding statue in front of the St. Louis Art Museum — is an essential part of any movement to honestly address the city’s long history of discrimination.

“I’ve been talking about this for 20 years,” said Umar Lee, a Muslim St. Louis-based writer and activist who has helped lead the push to change the city’s name. St. Louis’s history, Lee said, has been in many ways defined by state-sanctioned racial prejudice. The early French colonists were slave owners, and made slavery an integral part of the young city’s economy. Built across the Mississippi River from Cahokia, a former Native American city that was once one of the largest metropolises in the world, St. Louis played a pivotal role in the federal government’s 19th-century campaigns against Native Americans, hosting one of two central offices charged with overseeing what was then known as Indian Removal.

Those two formative events were the start of, in Lee’s words, “a long history of racism and bigotry.” And while they may seem far removed from the actions of a 13th-century king, for Lee and his supporters, that history is deeply connected — and the name chosen by the French colonists wasn’t an accident.

“The genocidal movements against Native Americans, anti-Black racism, anti-immigrant sentiment, we have to tie that to religious bigotry,” said Lee. “In St. Louis we got rid of the Confederate monuments; we got rid of the Columbus monument. Now it’s time for King Louis the Ninth to go.”

The conversation around St. Louis’s name, said Rabbi Susan Talve of St. Louis’s Central Reform Congregation, has to be contextualized in a broad reassessment of the city’s colonial history. “We’ve been doing this work since Mike Brown was murdered,” Talve said. “That was a catalyst for diving a bit deeper, and including more people in conversations about what the legacy of slavery, what the legacy of colonialism are in this country.”

“We have a lot of reparations that we owe in this city,” Talve said. “We have a lot of shameful history that we have to acknowledge and tell the truth about, if we’re going to learn from it, and grow beyond it.”

To Reverend James Poinsett, a Presbyterian minister and executive director of the Interfaith Partnership of Greater St. Louis, the way forward looks less clear. On June 11, a group of Jewish and Muslim leaders including Talve hosted an interfaith vigil at the base of the Saint Louis statue in front of the art museum. Poinsett, who attended, said he found the argument for removing the statue persuasive. But, he said, “it’s a sensitive issue, especially because of the deep Catholic heritage in this town.”

Rabbi Carnie Rose of B’nai Amoona, a Conservative congregation in the western St. Louis suburb of Creve Coeur, agreed. “For Catholics, Saint Louis is a very important name,” Rose said. “This is, to them, a holy figure.” In St. Louis, he said, a growing interfaith partnership has begun working toward helping the region’s minority populations gain further equity, and he worries too great a focus on the city’s name could endanger those efforts. “Is this the next step? Does that help, or does that hinder?” he asked. “Does it [impede] communities coming together across religious divides for the sake of other goals?”

The Archdiocese of St. Louis did not respond to a request for comment.

A Change.org petition to change St. Louis’s name currently has over 600 signatures; the nascent movement has a long way to go. But Lee is already envisioning the future it could achieve. He favors Confluence as a potential new name for the city: It would refer to the confluence of the Missouri and Mississippi rivers, but also, potentially, to a new period of reconciliation in the city’s painful, prejudiced history.

“It’s dedicated to racial equity, dedicated to righting the historical wrongs of St. Louis,” Lee said. “It has a police department that does not deal with citizens in a violent, oppressive manner. It is open to immigrants, is free of religious bigotry.”

“We know, if we go into history that forms of prejudice and extremism have always existed in humanity. But we can aspire to greater things.”