I speak for the tribe who followed Carl Reiner 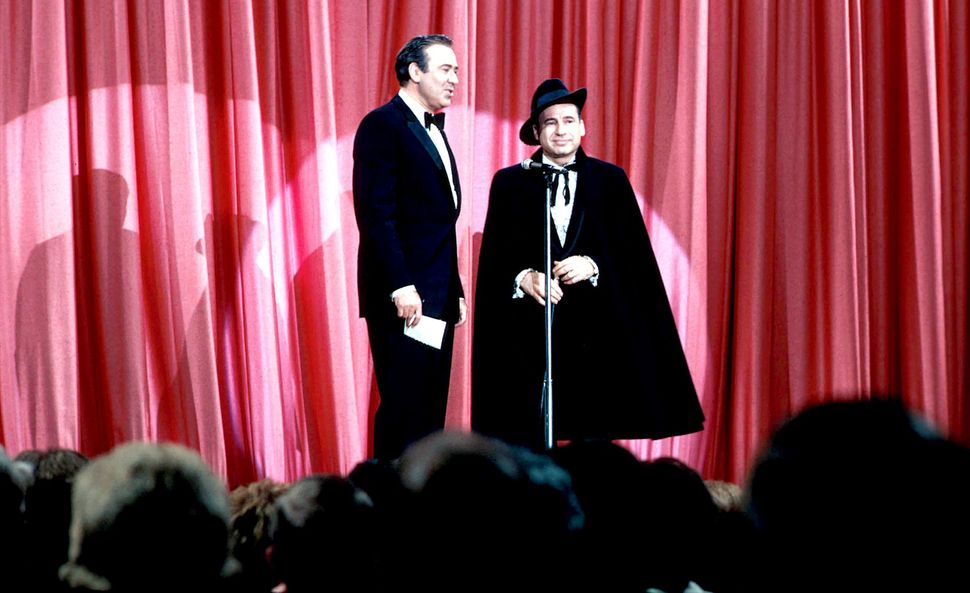 When I was growing up on Long Island, our house had a living room with orange-fabric couches (it was the 70s after all) and an upright piano flanked by two dark brown wood cabinets. On one side was a bar where my dad would have a Gin & Tonic (with a Stella D’oro breadstick) every night when he got home from his orthodontic practice in Queens. On the other side was a stereo with a load of albums.

I’m sure Frank Sinatra and Tony Bennett were in there, but the real gold was my dad’s stash of comedy albums — George Carlin, Tom Lehrer, Bob Newhart, and, best of all, “The 2000-Year-Old Man” and “The 2013-Year-Old Man” by Carl Reiner and Mel Brooks. Sure, Sinatra had his bobby-soxers, but Carl and Mel had the orthodontists of Long Island. Heck, Jews everywhere loved them.

My dad introduced me to this magic at a young age and, to his amusement, I took to memorizing much of their hilarity. No comedy slouch herself, my mother also had a crush on them. I wish I had a nickel for every conversation over the years where she dropped in the line; “We just want to stand here and look at you.” I’m not even going to give that last line context because if you don’t get it right away, go buy the albums and listen to them. As my father-in-law likes to say; “those who know, know.”

It was my dad and that album I thought of first when I heard about Carl Reiner passing at the age of 98. I told my son, Lev, that one of my comedy heroes had died and he said, “too bad he couldn’t make it to 2,000.” Smart-ass. Too bad indeed.

If you followed Carl Reiner on Twitter you very well might have believed that he could make it to 2,000. His tweet-bursts — feisty and opinionated mixed in with smart, cutting, and hilarious — lasted until the very end. He was one of the wittiest and most fervent voices in opposition to the president. Carl might be dead, but you should still follow him on Twitter.

Carl was also a master craftsman. I teach comedy writing and one of the examples I use in discussing the importance of the craft is from a book by Garry Marshall (may his memory also be for a blessing), “Wake Me When It’s Funny.” In it, Garry tells the story of getting notes from Carl Reiner on a “Dick Van Dyke Show” script — Carl pointed out that writers need to actually write out the physical comedy bits – “Dick doesn’t do something funny with the cummerbund; you have to tell Dick what to do to make it funny.”

Today, I’m a 50-something Jewish comedy writer who mourns with his tribe of comedy writers – and fans – as we pay homage to the inspiration that was Carl Reiner.

Lines from Reiner-and-Brooks’ albums are our Talmud, our shorthand. I’ve never met a comedian I respected who didn’t have that ancient DNA flowing through their veins. I don’t need to list all Carl’s creations but the width and breadth of what he wrote, produced and directed has inspired me as long as I can remember.

I loved my late dad for introducing me to Carl Reiner and Mel Brooks, who also raised me. And I’ve tried to carry on the tradition. When my twins were born, I stenciled famous comedy sayings above their cribs. They couldn’t read, of course, but who knew – maybe having the sage and funny words of geniuses look over them might help. Prominently displayed on that wall was Brooks’ sage insight, “As long as the world is turning and spinning, we’re all gonna be dizzy and we’re gonna make mistakes.”

Maybe it was no “Liquid Prell,” but I loved that those albums are one of the great inventions that brought my family even closer. And if you don’t get that reference, just remember: those who know, know.

Gary Rudoren is the co-author of the McSweeney’s humor bible, “Comedy by the Numbers,” and dressed as the 2,000-year-old man for a recent Halloween party. (He is also married to the Forward’s Editor-in-Chief, Jodi Rudoren.)

I speak for the tribe who followed Carl Reiner