On her 90th birthday, the Jewish origin story of Betty Boop 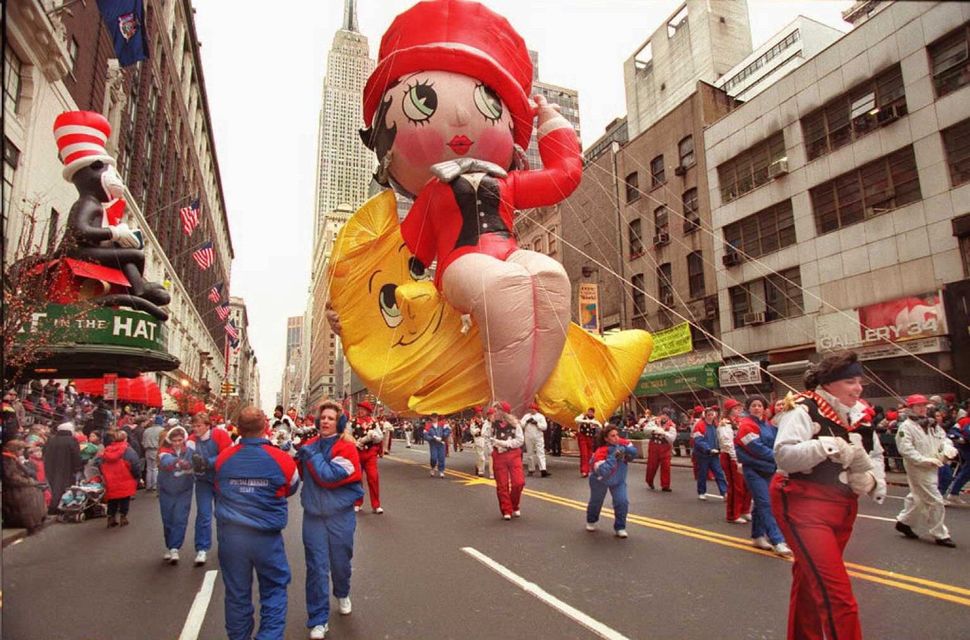 August 9 marks the 90th anniversary of Betty Boop’s first appearance in a cartoon short produced by the Austrian Jewish animator Max Fleischer. Betty was eventually voiced by a Bronx-born Jewish actress, Mae Questel. Yet fans of animation have sometimes been baffled in trying to pinpoint the degree of Yiddishkeit in Betty’s chameleon-like persona.

To be sure, her rising fame in recent years was due to adoration by Jewish fans. In 2012, the French Jewish comics artist and film director Joann Sfar, author of “The Rabbi’s Cat,” directed a TV commercial for Lancôme, the perfumes and cosmetics brand, starring Betty. Five years later, American Jewish fashion designer Zac Posen appeared with Betty in a commercial for the Pantone Color Institute. Posen had agreed to design a new dress for Betty in a color dubbed Betty Boop Red.

On a humbler scale, there are endless tchotchkes available that include Betty, some expressing a popular urge to make her seem more Jewish. A Betty Boop Tin Menorah Vintage Lunchpail is on sale on Etsy. It is a children’s lunchbox, repurposed as a menorah by adding rhinestones and aluminum candle cups.

It is described by the vendor as a “sparkly addition to your Hanukkah table! Plus, it has storage for candles, dreidels, candy, lipstick, whatever your heart desires,” this hybrid object recuperates Betty in a Jewish celebratory context, promising complete self-fulfilment.

While the origin of such tributes may be partly due to Betty’s Yiddishkeit, there is also the attraction of the quasi-delirious manic imagery in Fleischer’s free-flowing cartoons. Allen Ginsberg’s lengthy 1959 poem “Television Was a Baby Crawling Toward That Deathchamber,” expresses Boop-awareness at a time of maximum psychedelic intoxication. The product of an all-night writing session after he took amphetamines, heroin and magic mushrooms, Ginsberg’s “TV Baby,” as he called it, demonstrates a close identification with Betty: “Here I am — Old Betty Boop whoopsing behind the skull-microphone wondering what Idiot soap opera horror show we broadcast by Mistake — full of communists and frankenstein cops and mature capitalists running the State Department and the Daily News Editorial hypnotizing millions of legional-eyed detectives to commit mass murder on the Invisible/ which is only a bunch of women weeping hidden behind newspapers in the Andes, conspired against by Standard Oil…”

Surely Max Fleischer would have expressed his feelings about Betty differently, but he might have approved of Ginsberg’s assimilation of the cartoon character into social, political, industrial, and journalistic spheres. Although paranoid in tone, the poem captures the multi-facetedness and extensive impact of Betty and her protean character, with a Jewish perspective in the forefront.

More simply, Betty’s persistent trendiness, especially in recent years, may be due to her irrepressible curvaceousness, with a face that would later be echoed, if less seductively, in Tweety, the 1940s Warner Bros. Merrie Melodies canary. Betty’s cute essence is imitative and mimetic. Mae Questel got her start in showbiz as an imitator of Helen Kane, whose hit song, “I Wanna Be Loved by You” (1928) included the gentle, wistful interjection, “boop-oop-a-doop.”

Questel’s approach to this material was more brassy and caricatural, suitable for a series of cartoon films. In 1932, Kane sued Max Fleischer for appropriating her image and her act, but lost the case, as it turned out Kane had lifted the boop-oop-a-doop routine from songs by Baby Esther, a 1920s African American mainstay at Harlem’s Cotton Club who presented an infantilized onstage character.

The imitations and appropriations continued in the Betty Boop short “Stopping the Show” (1932) in which Betty imitates, among others, Fanny Brice (born Fania Borach (1891–1951) and immortalized in the musical “Funny Girl”.

In “Stopping the Show,” Betty sings “I’m An Indian,” a comic speciality number made popular by Brice with a thick Yiddish accent. The lyrics to “I’m An Indian” were written in 1920 by Blanche Merrill (born Blanche Dreyfoos; 1883-1966) for Brice to perform in the Ziegfeld Follies. Merrill’s other song texts for Brice, likewise redolent with Jewish content, include “The Yiddish Bride” and “Becky Is Back in the Ballet.” Yet “I’m an Indian” remains unique for its message about a young Jewish woman who claims to have changed ethnicity: “And now oy oy my people/ How can I tell them how/ Their little Rosie Rosenstein/ Is a terrible Indian now?”

In a comparable identity-shifting way, Max Fleischer and his artists created a melting pot of cultural references in which African Americans and Jews were closely associated. Initially, Betty Boop’s species was uncertain, as she was first presented in the short film “Dizzy Dishes” (1930) as a dog, a companion for Bimbo, the Fleischer Studio’s canine reply to Mickey Mouse.

Bimbo appears in some shorts to be in a form of blackface, while Betty, in the short “Minnie the Moocher,” is shown living in a New York tenement, harangued by hefty parents because she refuses to eat traditional German dishes such as hasenpfeffer, or rabbit stew, and sauerbraten, roasted marinated meat. Neither are kosher dishes, and the accents of Betty’s parents resemble the traditional German comic tones of a Sig Ruman, the Marx Brothers’ nemesis in “A Night at the Opera,” rather than anything specifically Jewish.

Adding to the perplexity, some Betty fans claim that in the mealtime scene of “Minnie the Moocher,” her father is wearing a kippah. On close inspection, it is clearly a tonsure or bald spot, since a single hair emerges from the center of his scalp, which could not happen were he sporting a yarmulke.

In still another metamorphosis, in “A Language All My Own,” (1935), a short made for the audiences in Japan, Betty travels to Tokyo and sings in Japanese to a public which is not depicted grotesquely, despite the usual standard of racial mockery in cartoon films of the era.

Mocking pop references of the day with such cuts as “Sayings of The Chairlady Portnoy,” a take-off on the maxims of Chairman Mao, and “Private Parts and the Jewish Mystique,” this retort to blame from Jewish sons for their neuroses may be Questel’s definitive contribution to comic Yiddishkeit.

By contrast, Betty’s elusive identity continues to inspire Jewish fans and creators in the arts. One of the latter is the American Jewish experimental filmmaker Ken Jacobs, whose “Ulysses in the Subway” (2016), a subterranean New York voyage through space and time, includes an apparition of Betty Boop. In heightened imaginings of Jewish poets and directors such as Ginsberg and Jacobs, Betty remains an indelible cultural presence.

Benjamin Ivry is a frequent contributor to The Forward.

On her 90th birthday, the Jewish origin story of Betty Boop