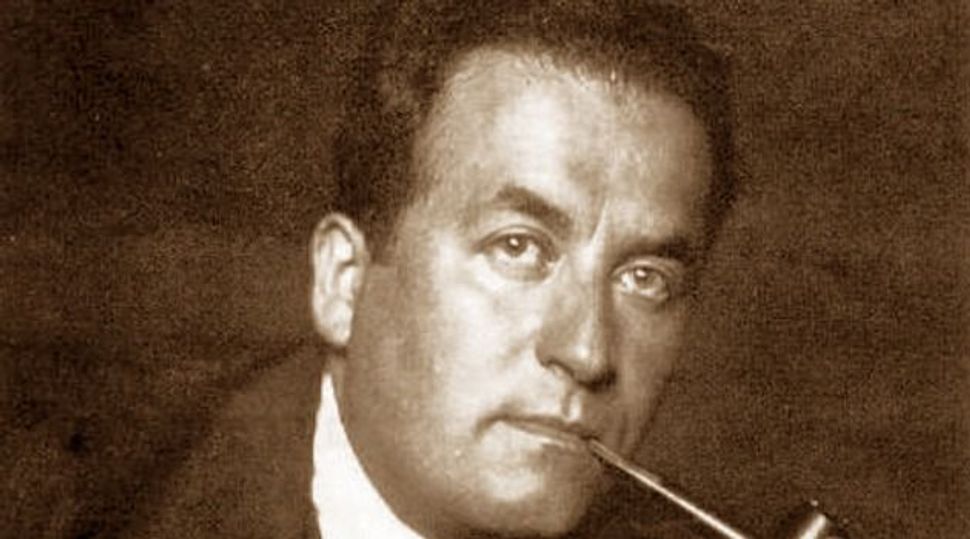 Seems Like Only Yesterday: Agnon won the Nobel Prize for literature in 1966. Image by Wikimedia Commons

Shai Agnon was born on this day in 1888. To commemorate that auspicious day, we return to this story, originally published in 2013, about Israel’s only Nobel laureate for literature.

Sitting in a lecture hall in the Talpiot section of Jerusalem, a group of 25 immigrants is discussing “A City and Its Fullness” (“Ir U’meloah” in Hebrew), a collection of 150 stories by Shai Agnon about the author’s ancestral home of Buczacz, located in present-day Ukraine. The meeting, part of a five-week course titled “Agnon’s Home Town,” takes place on the ground floor of Agnon’s renovated house on a lush Jerusalem street, just a few steps from the edge of the stark Judean Desert.

The stories, published posthumously, neatly illustrate the complexity, diversity and richness that earned the author Israel’s only Nobel Prize in literature, in 1966. On one hand, Agnon was the consummate Zionist who believed wholeheartedly in the effort to build a Jewish state in Palestine; on the other, he remained nostalgic for the bucolic village of his youth. He developed a deep connection to the Land of Israel, but an equally strong devotion to the enlightened and secular world. He was a loving family man who cherished his privacy and isolation in order to write.

The competing aspects of Agnon’s personality seem to strike the reader not as contradictions, but rather as complementary facets of the author’s inner persona that resonate neatly with the immigrant experience in Israel. Significantly, Agnon’s stories about Buczacz were written in the 1950s, half a century after Agnon arrived in Jaffa. Despite that fact — or, perhaps, because of it — they are steeped in nostalgia and romanticism for an age and a place gone by.

“I would compare Agnon’s relationship to Buczacz to Mark Twain’s relationship to Hannibal, Mo.,” said Rabbi Jeffrey Saks, the lecturer for the course. He is a native of New Jersey and the director of WebYeshiva.org, an interactive online Jewish learning portal. “Unlike many authors, Twain was a celebrated writer during his lifetime, and that enabled him to travel the world, which in turn enhanced his writing. But ultimately, he remained the little Missouri kid, painting fences and exploring what must have been a wonderland for a curious little boy.

“That’s what Buczacz was for Agnon. It was a small town — approximately 11,000 people, 7,000 of whom were Jews — with a river called the Strypa to serve as a backdrop for his adventures. That left a deep impression, and his romantic view of the town colored the entire breadth of his work.”

Like Twain, whose language and writing style came to define the term “Americana” but require the reader to possess a degree of prior knowledge and understanding about American history and folklore, reading Agnon is not for the uninitiated. His Hebrew style is antiquated and rich, steeped in a style derived from a deep resonance with Jewish sources and tradition, as well as with a love of general literature and “high” German culture.

It is a style that belies Agnon’s lack of formal education. Born in 1887 as Shmuel Yosef Halevi Czaczkes (he claimed to have been born in 1888, possibly to avoid the Russian army draft), he grew up in a traditional home, but quickly outgrew the local religious school. He retired from school to learn with his father, a rabbi, but the formal lessons were rare: Dad worked as a fur trader, and the young Czaczkes wiled away his days in the local synagogue. But in contrast to most Orthodox institutions of the time, the synagogue in Buczacz featured a rich library of secular literature in addition to traditional volumes of Talmud, Torah and rabbinic commentaries.

After immigrating to Palestine in 1907 at the age of 20, he published his first book, “And the Crooked Shall Be Made Straight,” in 1912 and formally changed his name to Agnon, a reference to his first post-aliyah book, about a woman whose husband had disappeared, leaving her unable to remarry, known in Hebrew as an agunah. (“Shai” is the acronym of his initials, as well as the Hebrew word for “gift,” and Agnon is a play on the word agunah).

Agnon lived in Jaffa, developed a friendship with Rabbi Abraham Isaac HaCohen Kook, who then served as chief rabbi of the port city, and lived the life of a secular, struggling artist a short walk from Tel Aviv, “the first Hebrew-speaking city.”

Five years later, having left religious practice, he moved to Berlin. His plans to stay in Germany for only a year or two were scuttled by World War I, and the fighting in Europe prevented Agnon from returning. By the time the war ended, he was married with two children.

Agnon’s time in Germany coincided with a period of Jewish revival, both for the author personally and for the local Jewish community. While there, Agnon became close with scholars, including Gershon Scholem, a scion of an assimilated German Jewish family who was then experimenting with Judaism. Agnon was not observant at the time, but his relationship with Scholem eventually led to contacts with other leading members of the German Jewish intelligentsia.

The latter eventually introduced Agnon to Salman Schocken, who decided to purchase the Haaretz newspaper for his son, Gershom Schocken, and became Agnon’s lifelong patron. The patronage came with a generous stipend for buying books, but also with limitations and expectations to produce on demand, particularly for holiday issues of Haaretz. The paper also serialized his novels prior to publication.

In 1924, after a fire destroyed his home and his extensive library in Berlin, Agnon returned to Israel, and spent the rest of his life in Jerusalem. Having left his wife and children in Germany for two years, he lived in a small apartment in Talpiot, then a moderate distance from the hustle-and-bustle of the city.

The solace did not last: During that time, he rebuilt his library but was forced to flee Arab rioters (with a suitcase containing several manuscripts) in 1929. For the second time, his library was ransacked and destroyed, and he returned to the center of Jerusalem, while he built a new home.

In 1931, the family moved into their third, and final, house, which has been refurbished and preserved as a museum dedicated to the life and work of Agnon. The small sitting room on the ground floor has been preserved in period style, and there are several photographs and displays on the walls, including the Nobel Prize. The only extravagance in the home is the upstairs library, with several thousand volumes (many of which still have Agnon’s handwritten notes), including secular literature in a variety of styles, and virtually every discipline of Jewish scholarship.

Also notable are the standing-height writing desk (Agnon did not know how to type, and had his wife to type out his scripts) and the fireproof safe, a rare luxury in 1930s-era Jerusalem, but a necessary expenditure after losing valuable manuscripts in 1924 and 1929.

Significantly, the interest in Agnon’s work has spread beyond Israel’s borders. Participants in the Jerusalem class hail from around the English-speaking world; online enrollment expands even farther afield.

“Rabbi Saks often weaves Agnon’s material into his classes on Talmud, Tanakh, Jewish history and literature, so when he began teaching courses on Agnon himself, I was excited to join in,” said Joel Nowicki, a native of Poland, who participates in the online lectures from his home in Warsaw

Nowicki, who moonlights as the conductor of a local Warsaw orchestra, said he maintains an “emotional attachment” to Agnon’s stories, thanks to the recurring themes of trying to be a good person, attaining deep spirituality while also remaining firmly planted in this world and, especially, maintaining the connection to the Land of Israel.

“The first Agnon story I learned was ‘The Fable of the Goat,’ about a boy who follows a magical goat into a cave in his shtetl and comes out in Israel, near Safed. Reading that story, especially in Poland after the Holocaust, and thinking about that boy being magically transported from the Old Country to the country that Jews always yearned for was very emotional for me,” Nowicki said.

Though Israeli schoolchildren do not always appreciate Agnon’s poetic language, his flowery prose and his view of a world lost resonate with readers in Israel and abroad, precisely because the messages aptly describe the modern era: mankind’s struggle to find stability in an age of mass migration and rapid cultural change.

“Reading Agnon is to stand on one side of a historical dividing line, peer over your shoulder at universal values like goodness and spirituality, but you also realize that something has been lost,” Saks said. “You wonder if and how the message of the past can still have meaning for the future. If that isn’t the experience of modern man, I don’t know what is.”

Andrew Friedman is freelance journalist based in Jerusalem. He is a regular contributor to The Jerusalem Report.