Hidden in an ordinary armchair, an extraordinary story of Nazi evil 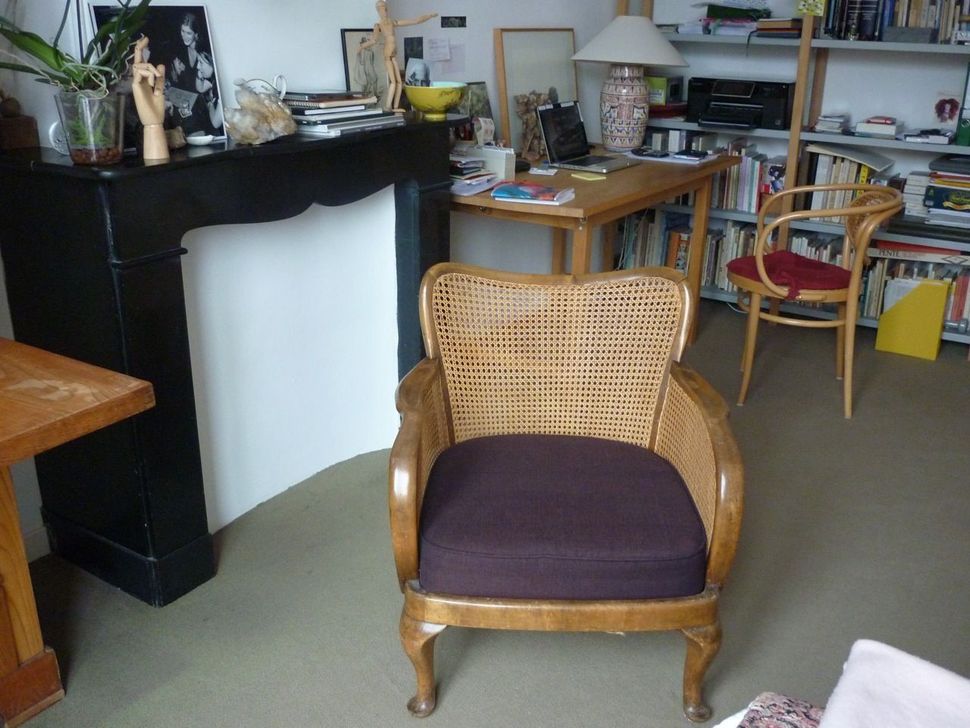 Armchair Historian: This chair, which originally belonged to Dr. Robert Griesinger was purchased at a thrift store in Prague. Image by Daniel Lee

Neo-Nazi visitors to the site of the Nazi Party Rally Grounds in Nuremberg are a perpetual problem for the city’s authorities. On a hot September day in 2016, I visited the Zeppelintribüne, the colossal concrete grandstand from which Hitler once addressed the roaring crowds. The sweltering heat ensured that at the time of my arrival, I was the only visitor to the crumbling site.

As I began to leave, I noticed a group of four shaven-headed men in black leather jackets, making their way up the rotting steps. They took turns making Nazi-style salutes from Hitler’s podium, while another man with a shaved head stood below taking photographs. As a Jewish historian who had spent years researching the Holocaust, this was my first experience of stumbling onto a group of neo-Nazis.

I was still shaken the following morning, when I set out to meet Barbara Schlegel, the daughter of a low-ranking Nazi official and Holocaust perpetrator, Robert Griesinger. Griesinger’s name means nothing to even the most enthusiastic scholar of the Third Reich, so why, then, was I in Nuremberg, about to meet his daughter?

Griesinger entered my life unexpectedly. In 2011, an upholsterer in Amsterdam found a bundle of swastika-covered documents inside the cushion of an armchair he was repairing. The papers all belonged to a Dr. Robert Griesinger. Jana, the armchair’s Czech owner, did not know Griesinger. She had purchased the chair from a thrift store while a student in Prague in the 1960s, and it was one of the few objects she brought with her to the Netherlands in the 1980s, when she obtained permission for her family to leave Communist Czechoslovakia. As a historian of the Second World War, who happened to be at the same university as Jana’s daughter, I was asked by the family to investigate the mystery of the hidden papers.

I immediately set out to uncover more about this Dr. Griesinger, who was not mentioned in any books on occupied Prague or anywhere online. Did he survive the war? And, of course, how did his most precious documents end up hidden inside a chair, hundreds of miles from Prague and Stuttgart? Despite the vast number of people caught up in Nazism before and during World War II, most of us can, today, name only a handful of Nazis, almost always those who formed part of Hitler’s inner circle. The very ordinariness of this man who, like thousands of ordinary Nazis had vanished from the historical record, made him all the more intriguing to me. I was determined to find out who this man was, and what his role had been in the Third Reich. The results of the search became my new book “The SS Officer’s Armchair.” 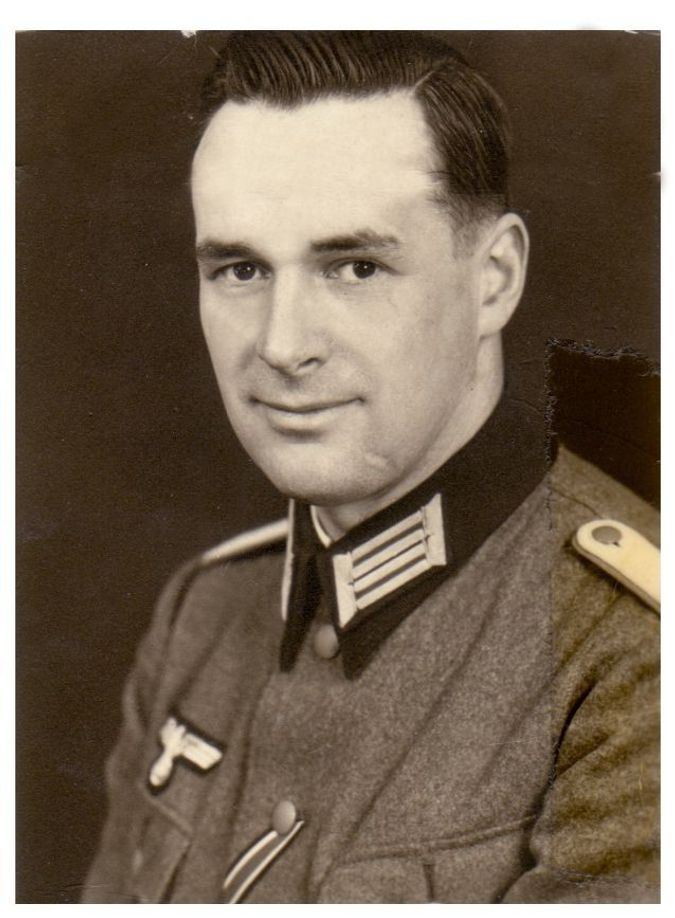 The Banality of Evil: Dr. Robert Griesinger lived in a house on Schottstrasse in Stuttgart next door to a Jewish family. Image by Daniel Lee

My quest to learn more about Griesinger lasted five years. It led me to German provincial towns where the man had studied and worked and to archives and libraries across Europe and, even America. I discovered early on that Griesinger was not as German as I had thought. His father, born in New Orleans, came from a family that owned enslaved people in Louisiana, and moved to Imperial Germany during the Long Depression of the 1870s. I also learned that he gained access to the elite of Nazi society, becoming an SS Officer in 1933. During the mid-1930s, Griesinger worked as a lawyer at the Stuttgart Gestapo. I eventually tracked down his two surviving daughters who were eager for details that might help them build up a picture of a father whose actions in the Third Reich had been shrouded in the shame and silence of post-war Germany. I even read his mother’s diary.

One thing I had not reckoned on, due to Griesinger’s conservative and anti-Semitic family background, was that he had ever lived among Jews, especially in a city like Stuttgart which had a small Jewish population of 4,500. After his marriage in early 1936, Robert and his new bride, Gisela, rented a house on Schottstrasse, an affluent street in northwest Stuttgart. When the Griesingers moved in, their next-door neighbors were a Jewish couple: Fritz and Helene Rothschild. It seemed incredible that Dr Robert Griesinger, SS officer and Gestapo employee, had Jewish neighbors, and so on a trip to Stuttgart I visited the street where both families lived.

The Rothschilds were far from the only Jews who lived in this pocket of Stuttgart. Today Stuttgart has hundreds of Stolpersteine (literally stumbling blocks), small metal plaques on the pavement outside a residence in which a Jewish family lived, before being deported. The shiny blocks record the names of the houses’ former Jewish residents, the date they were deported and the location of their extermination. 89 Stolpersteine commemorate the deported Jewish residents in Griesinger’s immediate area of Stuttgart alone. Before I reached Griesinger’s marital house, I counted half a dozen within a stone’s throw of his front door.

When I stood at the entrance, I discovered that the Griesingers and the Rothschilds lived in a single building that contained three separate residences. The building was among the last multi-family row houses constructed in Stuttgart. Multi-family houses with communal facilities, popular in the 1920s, did not sit well with the ideology of the Third Reich that sought instead to promote single-family dwellings that encouraged privacy. The Griesingers and the Rothschilds lived in close proximity, with only a wall between them. After passing the communal front lawn and terrace, the two families accessed their private quarters by individual front doors that were barely five metres away from one another.

I slowly pieced back together Fritz and Helene’s life. I tracked down their granddaughter, who told me that the Rothschilds were active figures on Stuttgart’s social scene, mixing with and hosting Jewish and non-Jewish friends alike. She told me that they had a mezuzah attached to their front door, something the Griesingers would have noticed. Archival documents reveal how the Rothschilds attempted to weather the Nazi storm after Fritz’s arrest by the Stuttgart Gestapo during Kristallnacht. Fritz and Helene fled to Paris with their son.

Remarkably, they were exempt from wearing the yellow star because Fritz worked as a negotiator at the Reich Commissar for the Unilever Konzern (Sodeco). This privilege was extremely rare. Only 26 Jews in the whole of occupied France received exemptions. Shortly after this protection ran out in February 1944, Fritz and Helene were rounded up and sent to the Drancy internment camp in northern Paris. In May 1944, they were deported to Auschwitz. Fritz was sent to the gas chambers upon arrival. But an SS doctor made the split-second decision that Helene appeared healthy and younger than her actual age of 49. She survived.

Over the years, I was constantly amazed at how finding and pulling the right threads opened up new, unexpected avenues of research, which made me question what I thought I knew about our relationship with the past. Researching Robert Griesinger led me to, among other things, the slave trade in pre-abolition New Orleans and Fritz Rothschild’s exceptional status in occupied Paris. It also led me to develop strong relationships with the children of Holocaust perpetrators, and even the discovery of relatives I had previously thought to have been murdered during Griesinger’s participation in the invasion of the USSR.

The picture that emerged of Griesinger, his choices, and even his family during the Third Reich, appeared in stark contrast to the documents hidden in the cushion, which portrayed him as an unspectacular civil servant. As I followed his trail, I thought often about how this committed Nazi would have reacted to the knowledge that his most precious documents, the only surviving records of everything he had been most proud, were now in the possession of a British Jew, whose relatives he would certainly have murdered. Returning texture and agency to one such perpetrator renders Griesinger a stand-in for the thousands of anonymous ordinary Nazis.

His story offers a chilling reminder of how ordinary people, not monsters, made the Nazi regime and its heinous crimes. Griesinger, and countless others like him, effortlessly switched from warm, kind and gentle husbands, fathers and co-workers to accomplices of a ruthlessly murderous and cold-blooded regime. Through the lens of a single object, I was able to shed new light on a period of history we think we know so well, exposing how ordinary Nazis became active participants in Nazi terror: actions that devastated millions of lives, yet remain appealing for Neo-Nazis today.

Daniel Lee is the author of “The S.S. Officer’s Armchair.”

Hidden in an ordinary armchair, an extraordinary story of Nazi evil