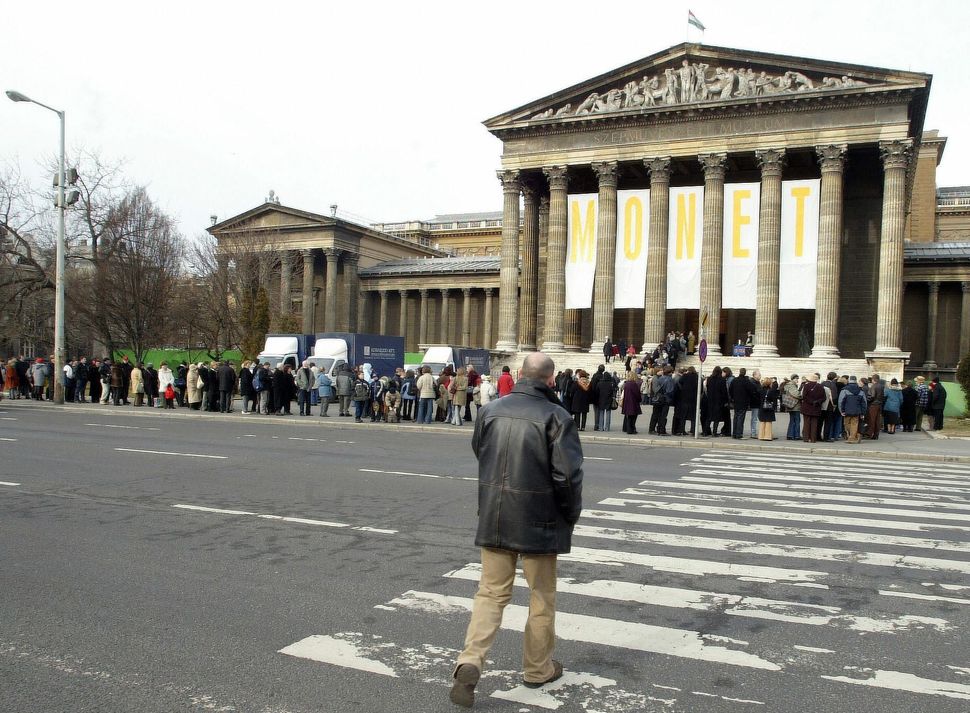 The Museum of Fine Art in Budapest, where a number of paintings in the Herzog collection still hang Image by Getty/FERENC ISZA/Stringer

Martha Nierenberg, a biochemist and entrepreneur who spent decades fighting her native Hungary for the the return of her family’s Nazi-looted masterpieces, has died at the age of 96.

Her family reported that she passed in her sleep on June 27 at a senior living facility in Rye, N.Y.

Martha Weiss de Csepel was born in Budapest to a prosperous and economically vital Jewish family. Her maternal grandfather was Baron Mor Lipot Herzog, owner of the largest private art collection in Hungary in the pre-war period. On her father’s side, Martha was the granddaughter of Manfred Weiss de Csepel, founder of Manfred Weiss Steel and Metal Works, Hungary’s largest machine factory which manufactured everything from sewing needles to trucks and airplanes. Her privileged background almost certainly saved her life, but the family endured staggering losses.

When the Nazis reached Budapest in March 1944, Martha, who was 20, escaped to a Roman Catholic hospital where she was hidden by nuns. “The whole family went into hiding with a friend in Budapest,” Nierenberg told The New York Times in 1998, of the Nazis’ March 19 advance. “By noon, they were looking for my father.”

Martha was able to return to Budapest two months later, The New York Times reports, when her father, Alfons Weiss de Csepel, gave the family factory to the Nazis in exchange for freedom. The Nazis used the plant, which employed 40,000, to fuel their war effort. Alfons was forced to stay behind, but Martha and 42 family members and associates escaped with a police escort.

But the Weiss de Csepels lost more than just the factory. The Nazis seized the family’s art, including works by El Greco, Velázquez, Courbet, Cranach and van Dyke. Some went to Berlin — Adolf Eichmann reviewed the collection personally – while others went to the Hungarian National Gallery and Budapest Museum of Fine Arts, where they hang to this day. Hundreds of other items, some hidden away before the Nazis invaded, remain lost.

Nierenberg, who stood to inherit some of the art after her mother’s death, remembered the collection fondly, telling the Times that the mansion of Baron Herzog on the Champs-Elysees was “like a museum, like the Frick.”

In 1945, she and her mother, Erzsebet Herzog Weiss de Csepel, who held a degree in medicine and studied psychiatry in Vienna, moved to the United States, settling in New York where Nierenberg continued her own education in science at the Rockefeller Institute for Medical Research after studying at Radcliffe and the Massachusetts Institute of Technology. She trained as a biochemist and spoke and spoke six languages.

In 1951, she married Ted Nierenberg, with whom she founded Dansk Designs, a houseware company which helped bring Nordic design to the American market. In later years, the Nierenbergs fought a protracted battle for restitution — one of the highest-value cases of its kind pursued by a single family.

In 1996, a few years into their retirement, the Nierenbergs approached the Hungarian government to reclaim the Herzog art and later took them to court.

Over 40 paintings, estimated at around $100 million, remain in play in an ongoing legal battle across two countries. The Hungarian government has refused to release that art despite a history of high profile advocacy — including from Hillary Rodham Clinton and Edward Kennedy (then senators) and, most recently, billionaire philanthropist Ronald S. Lauder, who funded a 2010 lawsuit — this time in Washington, DC district court. “In the area of Holocaust restitution, the government of Hungary has been a particularly bad actor,” Michael S. Shuster, the Herzog case’s lead attorney in the Herzog lawsuit said in a 2010.

“We had no choice but to bring the Herzog family’s claim before a U.S. court.”

Nierenberg is survived by her children, Lisa, Karin, Peter and Al. The family will continue to pursue the case.