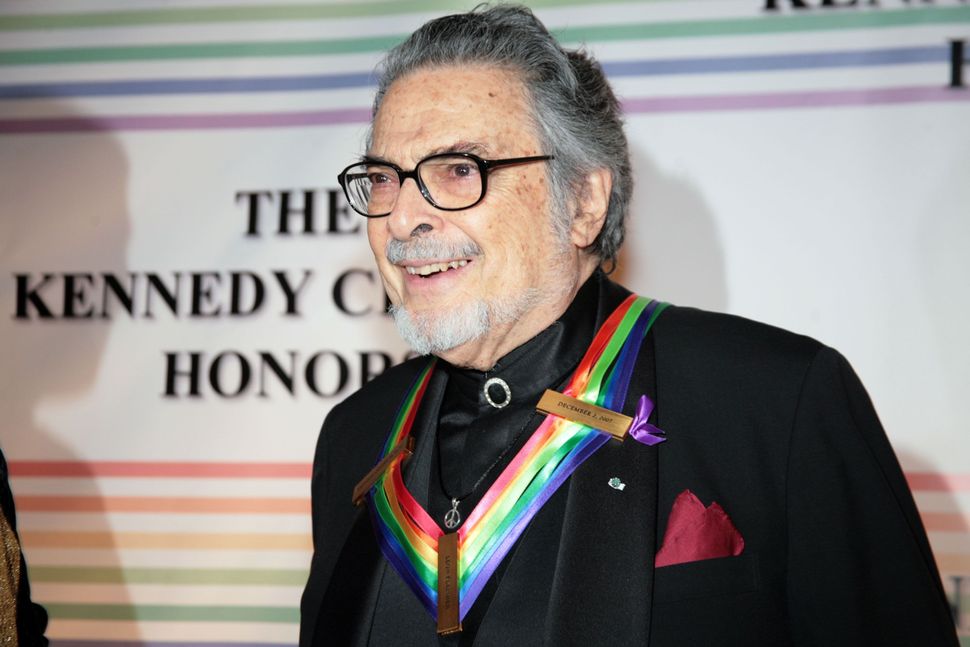 The pianist Leon Fleisher, who died on August 2 at age 92, was part of an aspirational generation of American Jews. Born in San Francisco, he was the son of impoverished immigrants from Odessa and Poland who managed two hat shops.

By age four, Fleisher already showed talent at the piano. He studied with Lev Schorr, a teacher who typically reduced his young pupils, including Hephzibah Menuhin and Samuel Lipman, to tears. Fleisher later recalled that Schorr would make it up to students by inviting them to feast on lamb chops for lunch after traumatic lessons.

As a recent biography of the violinist Isaac Stern observes, Fleisher, along with Yehudi Menhuin, Stern, and other future musical stars, were products of the intense pressure to succeed in San Francisco’s thriving Jewish community.

Curiously, this ambition has attracted criticism from some observers who possibly misunderstand the discipline required for a virtuoso career in music. Andrew Solomon, a psychology professor at Columbia, cites a joke Fleisher made in a memoir and in multiple interviews, that his mother gave him “a choice between being the first Jewish president or a great pianist.” Solomon humorlessly describes this comment as being made “ruefully,” as if it reflected angst that would develop after Fleisher was stricken in his late thirties with a hand ailment that he struggled with, more or less successfully, for the rest of his life.

Solomon is quick to assign blame for this hand problem, citing Fleisher’s son Julian, a cabaret performer who tours with an ensemble drolly billed as “Julian Fleisher and His Rather Big Band.” Julian claims, according to Solomon, that his father “used his right hand relentlessly because [Fleisher’s] mother told him to; he used it until it broke.”

In fact, Fleisher blamed his hand trouble on excessive hours spent practicing with both hands in adulthood. Several of his contemporaries among American Jewish pianists, from Gary Graffman to Byron Janis (born Byron Yanks of Russian Jewish origin) were also hobbled by hand problems.

Instead of concluding that Mrs. Fleisher headed a consortium of destructive Yiddishe Mommes, it is likelier that virtuosic pianism, as a percussive contact sport, repeatedly stresses performers’ hands. Playing heavyweight works like concertos by Brahms and Tchaikovsky can injure Jewish and non-Jewish pianists alike. Later generations of great Jewish pianists, from Murray Perahia to Richard Goode, have also experienced intermittent hand problems not caused by their mothers.

Fleisher himself was no plaintive victim. His manner was upbeat and loquacious, as I found when I interviewed him circa 2004 in Manhattan when his CD “Two Hands,” marked a return to playing music without being limited to the one-handed repertory.

Yet surely Fleisher had cause for kvetching. Writing in “Musical America” in 1994, the American Jewish pianist and critic Harris Goldsmith called Fleisher’s hand injury the biggest disaster for American pianism since the death in an airplane crash of William Kapell (1922 -1953), born in New York of Spanish-Russian Jewish ancestry.

Over the decades, by persistent effort, Fleisher survived as a musician, possibly due to what Goldsmith called his “turbulent physicality” at the keyboard. A combination of innate gifts and ironclad self-belief of the kind nurtured by parents who endlessly admire their children ensured Fleisher’s remarkable endurance.

Unusually self-confident, in his younger years he was unfazed by jibes from the terrifying conductor George Szell, who was vocally anti-Semitic despite being of Hungarian Jewish origin himself. As Szell’s biographer Marcia Hansen Kraus notes, the maestro, called “Dr. Cyclops” by cowed musicians, dubbed Fleisher “Schnozzola,” mocking the dimensions of the pianist’s nose by alluding to the comedian Jimmy Durante.

Despite this derision, Fleisher recorded with Szell some performances of concertos, especially by Mozart Schumann, and Grieg, that are considered ideal.

Such was Fleisher’s stamina and persistent exploring instinct that at age 85, this interpreter of exquisite versions of Bach, Mozart, Beethoven, Schumann, Chopin, and other highbrow composers ventured into the American Jewish songbook on a new CD.

Jerome Kern’s “All the Things You Are,” as arranged by Fleisher’s student Stephen Prutsman, is not exactly a jazzy entity nor, happily, a schmaltzy attempt at crossover music. Instead, it is a pensive weighing and balancing of melodies and rhythms with a dollop of Yiddishkeit. Like the rest of the CD on which it appears, “All the Things You Are” is like a late self-portrait by Rembrandt, smiling with a profound sense of humanity.

In August 2014, Fleisher informed one blogger that he included Kern’s melody on the CD, apart from its innate quality and the fine arrangement, because he “thought it might please those modernists who are attracted by [Arnold] Schoenberg” insofar as the tune “comprises all twelve notes of the scale;… Schoenberg would have been quite pleased by that.”

On the same CD, Fleisher likewise brings poignant profundity to George Gershwin’s The Man I Love, in an arrangement by the usually glitzier virtuoso Earl Wild.

This Gershwin recording brought Fleisher full circle. After his early appearances as a young prodigy, in 1943 the French Jewish maestro Pierre Monteux proclaimed him the “pianistic find of the century.” Fleisher was asked to play Gershwin’s Concerto in F and Rhapsody in Blue at the Hollywood Bowl.

The German Jewish pianist and teacher Artur Schnabel, his mentor from the late 1930s until the late 1940s, insisted that Fleisher refuse this opportunity. Schnabel, whom Fleisher idolized with lifelong fervor, decreed that pianists should only perform music “better than can be played.”

For Schnabel, this meant boiling down repertoire to the German masters and select contemporary works. Following this example, Fleisher championed modern American Jewish composers such as Bayonne, New Jersey-born George Perle, whose sprightly, witty “Musical Offerings,” composed for Fleisher, are also included on his 2014 CD.

Perle’s “Musical Offerings” capture Fleisher’s boisterous vivacity as seen in some interviews, which is absent from a bland and surprisingly dull co-authored memoir that did not fully evoke the pianist for readers who knew him.

His strong personality was evident too in “L.H.,” (an abbreviation for left hand) a musical tribute written for him by Leon Kirchner, born in Brooklyn to a Russian Jewish family. A vital, highly individualistic character portrait of Fleisher, Kirchner’s work is humorous, yet deeply serious, akin to Fleisher’s approach to music that made him such a singular talent.

Friendship was a key to Fleisher’s achievement, with renowned contemporaries such as Graffman or one of his students, the composer Dina Koston, who cofounded with Fleisher the Theater Chamber Players ensemble in Washington, D.C.

Koston, who established a charitable fund for new music with her husband Roger Shapiro (1927-2002), a research psychiatrist and psychoanalyst, composed “Thoughts of Evelyn. In memoriam Evelyn Swarthout Hayes.” This meditation on another pianist who, like herself, was active in music-related tzedakah, is movingly rendered by Fleisher on his 2014 CD.

Ultimately, Fleisher’s forceful stoutheartedness that made possible a lifetime of artistry was his real achievement, along with his teaching. His life was a triumphant story of surpassing difficulties, with his recorded legacy remaining to be cherished by future generations.