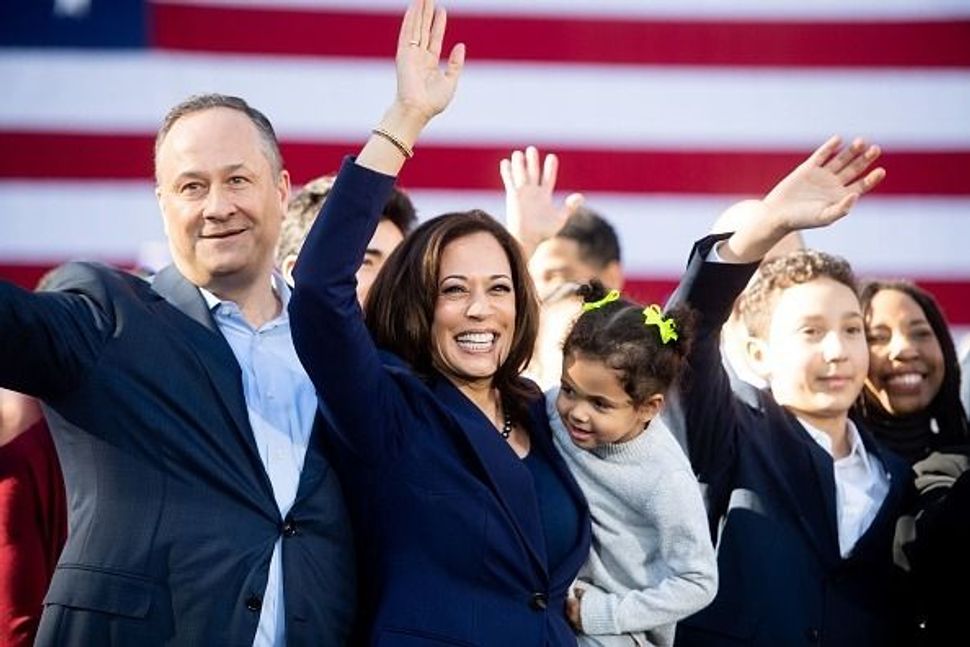 (JTA) — In the middle of her first speech as Joe Biden’s running mate, Sen. Kamala Harris disclosed her favorite nickname.

“My family means everything to me. And I’ve had a lot of titles over my career, and certainly, vice president will be great, but ‘momala’ will always be the one that means the most,” she said Thursday in Wilmington, Delaware.

Despite the fact that their father — Harris’ husband, Douglas Emhoff — is Jewish, it’s unclear if they realized their nickname for their stepmom is the exact pronunciation of an endearing Yiddish word: “mamele.”

Mamele, which uses the affectionate Yiddish diminutive -le, literally means “little mama” and is a term of endearment for moms.

Happy birthday to our daughter, Ella. My heart is whole and my life is full with you in it.

Their courtship story began in 2013, when Harris’ friend Chrisette Hudlin set them up on a blind date. Harris, now 55, was then California’s attorney general. Hudlin was a public relations consultant, and Emhoff was (as he still is) an entertainment lawyer. He was also divorced with two kids from a previous marriage.

In Harris’ memoir, “The Truth We Hold,” she said Emhoff sent this awkward text before they met up: “Hey! It’s Doug. Just saying hi! I’m at the Lakers game.”

“Then I punctuated it with my own bit of awkwardness — ‘Go Lakers!’— even though I’m really a Warriors fan,” Harris wrote.

Then, the morning after their first date, Emhoff got candid.

“I’m too old to play games or hide the ball,” he said in an email to Harris. “I really like you, and I want to see if we can make this work.”

The two were married by 2014. The wedding incorporated Jewish and Indian traditions (Harris’ father is Jamaican and her mother was Indian) — Emhoff broke a glass, and Harris gave him a traditional Indian garland to wear.

Since then, both Harris and Emhoff have gotten sappy about each other on social media.

Happy Birthday @KamalaHarris⁩! You are always there for us with a big hug, bright smile, infectious laugh and just the right words, all with delicious food and an amazing soundtrack! We love you so so much (and are VERY proud of you)! Doug, Cole & Ella. pic.twitter.com/7evystcTz1

Emhoff has been known to gush about Harris’ cooking.

When I have some time off the campaign trail, I love to be in the kitchen whipping up something new for my family. See what @douglasemhoff and I were cooking the other day. pic.twitter.com/rmjRRPkYBX

But the best quotes that Harris has given about their relationship involve Emhoff’s parents, who lived in Brooklyn and New Jersey before moving to California.

In a January 2019 talk at the 92nd Street Y in New York City, Harris describes meeting her in-laws for the first time. When her interviewer asks if Emhoff’s parents still live in New Jersey, Harris says “They are in California now, but New Jersey is very much in them.”

As Harris recalls, Emhoff’s mother Barbara put Harris’ face in her hands and said: “Oh, look at you! You’re prettier than you are on television!”

Barbara then called for her husband: “Mike, look at her!”

The post Kamala Harris’ Yiddish nickname shows how close she is with her Jewish family appeared first on Jewish Telegraphic Agency.