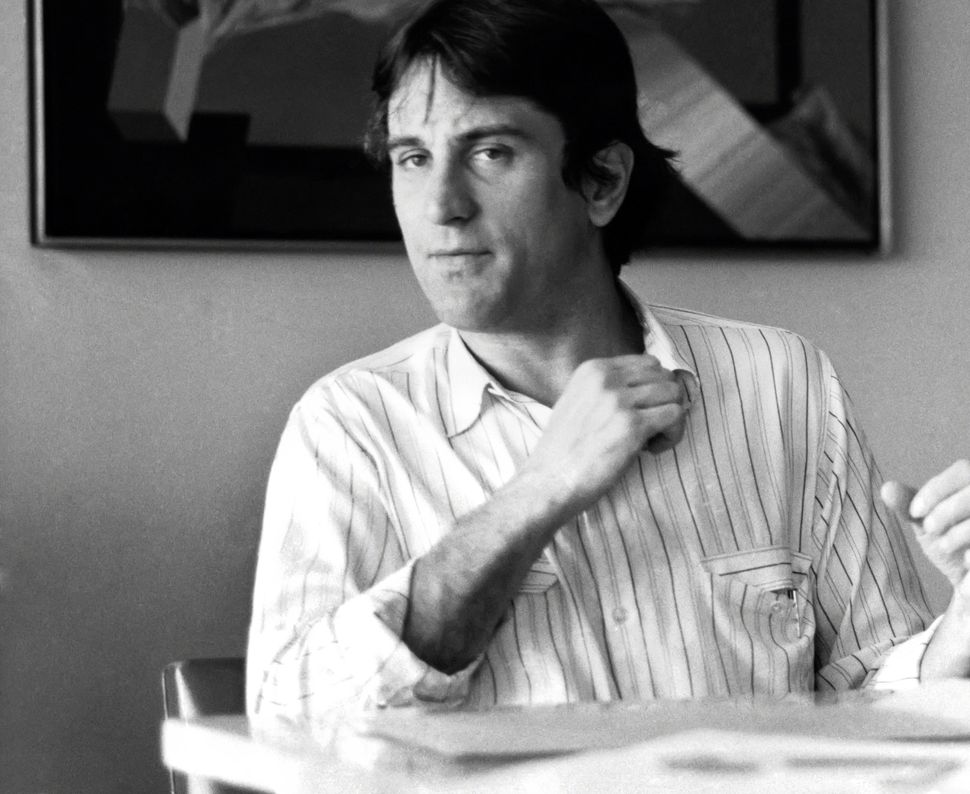 Actor Robert De Niro, who turns 78 today, is perhaps best known for playing the roles of Italian gangsters and assorted crazies in his much-lauded career in film. An entire subgenre of his work, however, has been devoted to portraying Jewish characters: gangsters and otherwise.

Far from being typecast in roles as an Italian American, De Niro has played a whole host of ethnic types, including Jews, Irish and Poles. Truth is, De Niro himself boasts only one-quarter Italian ancestry: His father, the abstract expressionist painter Robert De Niro Sr., was half Irish, and his mother, painter and poet Virginia Holton Admiral, boasted Dutch, English, French and German ancestry.

Still, De Niro has made a specialty of playing Jews nearly as often as he has Italians, from his early role as Jon Rubin in the 1968 film “Greetings” by a then-unknown director named Brian De Palma, through his recent portrayal of disgraced financier Bernie Madoff in the 2017 HBO movie “The Wizard of Lies.” If anything, De Niro is the one-man embodiment of the cultural kinship between American Jews and Italians, whose immigrant stories often paralleled each other and whose close-knit tribal and familial ties are often remarked on for their similarities.

Far from the streetwise characters he has so often portrayed so memorably on celluloid, De Niro himself enjoyed a bohemian upbringing in Manhattan’s artsy Greenwich Village as the son of two painters. His father had studied at the renowned, experimental Black Mountain College, and in the Village, De Niro’s parents’ group of friends included writers Anaïs Nin and Henry Miller, playwright Tennessee Williams, and the actress and famous German-Jewish dancer Valeska Gert. Peggy Guggenheim was a patron and collector of Admiral’s work. Shortly after De Niro Jr. was born, his parents separated and De Niro Sr. came out as gay. Bobby De Niro attended a series of both private and public schools, and while still a teenager he began studying acting with the American Jewish theater luminaries Stella Adler, Lee Strasberg and Herbert Berghof. They all taught variants of the Stanislavski system of “Method” acting, of which De Niro became a devoted adherent.

The 1976 film “The Last Tycoon,” based on F. Scott Fitzgerald’s novel, was created by director Elia Kazan and the Jewish producer Sam Spiegel and is based on British Jewish playwright Harold Pinter’s screenplay adaptation. De Niro starred in the movie as Fitzgerald’s fictional movie producer, Monroe Stahr, who was modeled on the legendary Jewish Hollywood film producer Irving Thalberg.

Martin Scorsese’s 1982 film “The King of Comedy” was one of the filmmaker’s most Jewish movies. Written by Paul D. Zimmerman and produced by onetime Israeli intelligence agent Arnon Milchan, the film’s three main characters are Jewish. De Niro played the aspiring comedian Rupert Pupkin; Jerry Lewis played the late-night TV talk show host Jerry Langford, and Langford’s crazed stalker, Masha, was played to the deliriously demonic hilt by Sandra Bernhard. When Rupert finally scores an appearance on Jerry’s “Tonight Show”-like program by teaming up with Masha to kidnap the host and hold him hostage, he concludes his monologue by saying: “Tomorrow you’ll know I wasn’t kidding and you’ll all think I’m crazy. But I figure it this way: Better to be king for a night than a schmuck for a lifetime.”

Among De Niro’s most memorable Jewish roles was his portrayal of David “Noodles” Aaronson in Sergio Leone’s epic 1984 Jewish gangster film, “Once Upon a Time in America.” The film was based on “The Hoods,” a memoir by Harry Grey (born Herschel Goldberg), written when Grey was imprisoned in Sing Sing. It traces the story of a group of friends from their boyhood on Manhattan’s Lower East Side through their forays into bootlegging, robbery, rape, betrayal and murder. Oddly, the main gangsters in the film were all portrayed by non-Jews, including James Wood, Burt Young and Joe Pesci. Now that the film has been restored to its four-hour-plus director’s cut, the movie — originally a flop when it was released in the United States in a butchered two-hour version — is considered one of the greatest gangster movies of all time. That being said, Leone didn’t go out of his way to make much of the fact that the mobsters were Jewish, and De Niro could just as well have been playing a simple variant of his role as the young Vito Corleone in “The Godfather Part II.” De Niro reprised the role of a Jewish gangster in the 1995 Scorsese-directed film “Casino” in which he played Sam “Ace” Rothstein, who was modeled on Frank Rosenthal, a real-life bookmaker and casino executive who was eventually banned from Las Vegas for his connections to organized crime.

De Niro turned down Scorsese’s request to portray one of the most famous Jews of all time: the title character in Scorsese’s 1988 film version of the Nikos Kazantzakis novel “The Last Temptation of Christ.” The role went to Willem Dafoe.

In Irwin Winkler’s 1991 historical drama “Guilty by Suspicion,” De Niro played a film director named David Merrill who, upon his return from abroad, couldn’t get hired in Hollywood due to Red Scare hysteria. De Niro’s character was a composite of film directors like John Berry, the latter born Jak Szold in the Bronx, son of a Polish Jewish father and a Romanian mother.

In real life, De Niro is an outspoken supporter of Israel. He frequently lends his name and presence to pro-Israel fundraisers, although his love for Israel hasn’t put him into the pro-Donald Trump camp. In fall 2016, just before the presidential election, at the annual Western Region Gala of Friends of the Israel Defense Forces, held in Los Angeles, De Niro refused to pose for a photograph with Arnold Schwarzenegger, saying, “If you’re supporting Trump, I want nothing to do with you.” He may have in fact been wrong about Schwarzenegger’s support of Trump, but whatever.

De Niro of course famously told off Trump with the “f-word” at aTony Awards ceremony, provoking Trump to strike back on Twitter by calling De Niro “a very low IQ individual” and referring to him as “Punchy,” presumably a reference to De Niro’s Academy Award-winning performance as middleweight boxing champ Jake La Motta in the 1980s film “Raging Bull.” La Motta, who grew up on the Lower East Side, was always thought to be 100% Italian American, but later on in life he claimed that his mother was Jewish.