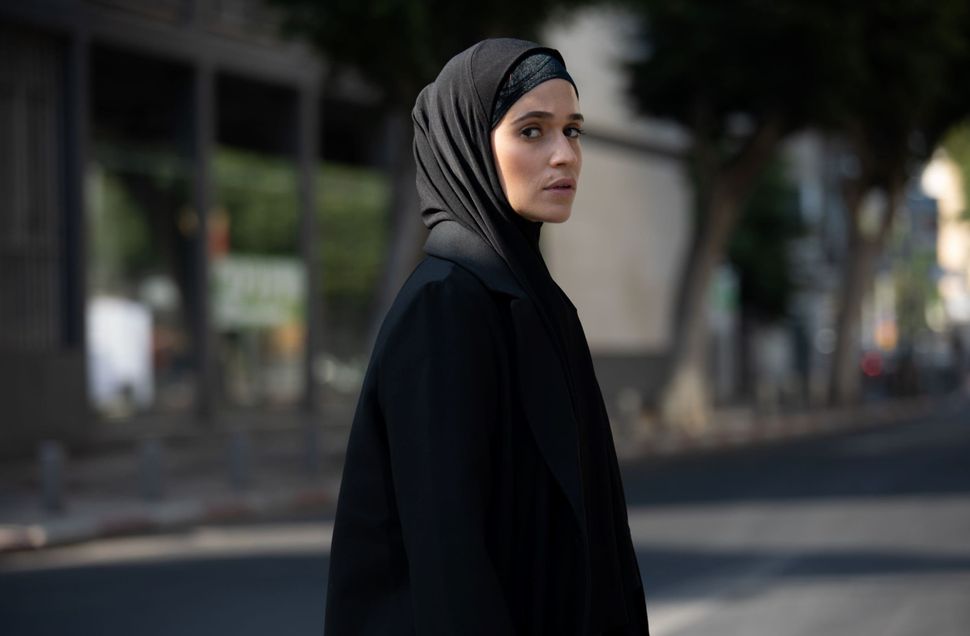 A clash between Mossad agents and intelligence agents of the Islamic Republic of Iran forms the basis for “Tehran,” an Israeli TV miniseries debuting in America next month on AppleTV. The series features a storyline no less thrilling than the war of the Titans, and director Daniel Syrkin cleverly utilizes all the exciting elements of the espionage genre: healthy doses of suspense, angst and cliff-hanging conflicts.

Overall, the cast of “Tehran” offers very convincing performances, in particular Niv Sultan, Navid Negahban and Shaun Tou who respectively play the roles of Tomar (the Persian-speaking Mossad agent with a sweet accent), Massud (an Iranian Mossad collaborator), and Faraz (the head of the Iranian Intelligence Service — the IIS). Certain scenes were actually shot on location in the show’s titular Iranian capital, lending a strong element of verisimilitude to the proceedings. The drama is further heightened via subplots featuring Iranian youth and anti-government protestors, especially the idealistic university students who fight bravely for democracy against the oppressive theocratic regime of the Islamic Republic.

Yet, the show is hampered by errors in which the show depicts the religious and education levels of the officials of the Iranian regime, and more importantly the misrepresentation of dissidents, which could ironically be used to the advantage of the very government it seeks to critique.

Let’s begin with the more obvious shortcomings: For many Iranian expatriates, including those who have been tortured as political prisoners in the notorious Evin prison, or the intellectuals who for years have witnessed the ignorance and brutality of the Iranian regime, some of the errors might be unforgivable, such as when certain Islamic Republic agents display humane behavior along with super-intelligence. How, for example, can these super-agents manage to arrest an individual based solely on the verbal description of a face? And why are some of the Islamic Republic agents — known to be chosen from the least informed and most servile — characterized as highly-educated? In Tehran, Faraz speaks fluent English with an American accent, while his wife is also a polyglot who displays better language skills than Mossad’s chief. Ironically, she not only asks the Mossad’s chief to sing her a song, she in turn sings to him an old Persian pop song that was banned by the religious regime. Never mind that it is a taboo for women to sing among men.

Throughout the series, when it comes to showing humanity, the bias is decisively in favor of Islamic Republic agents. Faraz, the head of IIS, for instance, repeatedly demonstrates compassion when he has a chance to murder a Mossad agent or others close to Tomar. Mossad on the other hand, as depicted in the series, does not hesitate to kill if necessary even those who helped the agency in its ploys or sabotage schemes. Should the director have consulted any political opposition groups or human rights groups in Iran, he would have drawn a more bloody, gruesome and horrible picture than what is seen here.

However, the most disturbing aspect of “Tehran” is the way it treats Iranian students as an opposition group. Since the inception of the Islamic regime of Iran more than 40 years ago, the clergymen ruling over the country have been aware of the danger posed to them by the intellectuals and university students. It is therefore no coincidence when in his speech of 1978, Ayatollah Khomeini, the theocratic regime’s late founder, compared universities to “cluster bombs” that needed to be purged. Under direct orders from Khomeini, between 1980 and 1983, a “Cultural Revolution” was instigated — all universities were closed and thousands of students and professors were purged under the pretext that universities did not adhere to Islamic values. To this date, an accurate number of those killed in the process remains unknown.

In 1988, when 4,000 political prisoners were clandestinely massacred, a significant number of the victims were young university students. One of the most public displays of the regime’s hatred of students occurred during the second week of July, 1999, when the Basij (paramilitary thugs of the regime) attacked university dormitories — at least 17 students were killed, 1500 were arrested, and numerous protestors were injured; one was thrown off the third floor and lost one of his eyes. Even so, students have been the backbone of most uprisings in Iran – from the Green movement in June 2009 where thousands were arrested, tortured and raped, and again in November of 2019 when Amnesty International declared that “Iranian security forces opened fire on unarmed protesters, killing at least 304 people. Iranian authorities subsequently arrested thousands of protesters as well as journalists, human rights defenders and students in a sweeping crackdown to prevent them from speaking up about the protests.”

Unable to control these educated self-sacrificing youths who radically oppose the autocratic rule of the “Supreme Leader” and his corrupt reactionary clergymen and ruthless agents, it is no wonder that the Iranian propaganda machine has tried hard, for decades, to portray these students along with any other opposition activists as corrupt demons who have been duped by Mossad or the CIA.

Unfortunately, part of this bait has been taken by Tehran. Thus, as the camera tries to portray the real mundane lives of those brave young idealists crushed under the iron fist of the “Supreme Leader,” it becomes a carnival mirror, reflecting something that seems as if it were taken directly out of the Islamic regime’s playbook. As depicted by Daniel Syrkin, those young student opponents of the regime unfortunately carry all the distorted imagery that the Iranian regime is happy to show its base; they become junkies who distribute, sell and use all kinds of illicit drugs. The association and depiction of these so-called freedom fighters as a gang of drug dealers is not only a perfect propaganda tool for the Iranian regime, it will not find any sympathy with the viewers either.

Such a distorted, superficial picture hung on a flimsy façade is not only far from the reality lived and observed by many native Iranians, it obscures the tragic unequal fight that continues to be fought by Iran’s few self-sacrificing youth who wield only pens and social media as their weapons against one of the most organized and merciless fascist regimes in the region. Imagine a movie portraying the partisan struggle against the Gestapo in WWII conducted by drug addicts distributing LSD and crystal meth. In this regard, “Tehran” dangerously trespasses the boundaries of an artistic mimesis and simply reflects the images one can see frequently on Iranian state TV.

Despite all these shortcomings, Tehran is entertaining to watch. But while Syrkin leaves his audience with a satisfying conclusion, he does a disservice to the reality lived by the Iranian people. A regime which is willing to use both physical violence and cultural propaganda to oppress its people can easily point to this show as evidence in labeling dissenters as “corrupt” enemies of the state. To relay such falsehoods is a pity.

Arash Steele is a freelance writer and Farsi translator who immigrated from Iran shortly before the 1979 Iranian Revolution.