He collaborated with Leonard Bernstein, Allen Ginsberg and Captain Beefheart — can you name this guitarist? 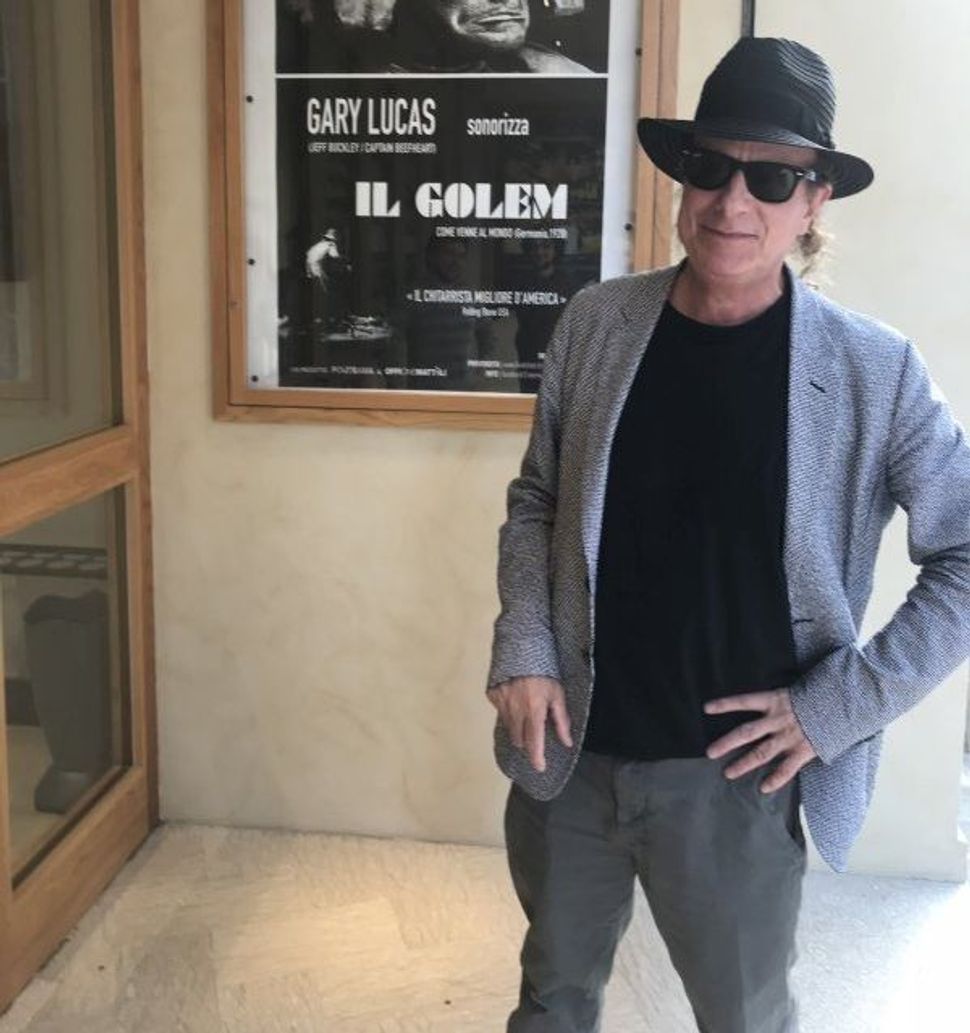 Born in 1952, the eclectic American Jewish guitarist Gary Lucas has collaborated in performance with Captain Beefheart’s band and Jeff Buckley, but also with Leonard Bernstein, and Allen Ginsberg. Anticipating the release early next year of “The Essential Gary Lucas,” a 2-CD retrospective from Knitting Factory Records, the Syracuse-born musician has regaled fans during the COVID-19 pandemic shutdown with thrice-weekly recitals on Facebook from his Greenwich Village apartment, from which he recently spoke with The Forward’s Benjamin Ivry about Yiddishkeit in past and present projects.

The Forward: Your family name was originally Lichtenstein, while the father of your friend and collaborator Lou Reed changed his family’s name from Rabinowitz. Would it have been possible in the 1970s to launch a rock career with names like Lichtenstein or Rabinowitz?

Gary Lucas: I think so, it’s conceivable, especially coming out of the so-called Downtown [New York] music scene in my case, since there, a high priority was put on a Jewish identity overall. If you look at John Zorn, he has a very Jewish name. When I first heard of the transmogrification of the family name, I first said to my parents, ‘I think I’d like to change it back.’ I was very cognizant of my Jewish identity from the start.

You date your awareness of Jewish identity to when “Life Magazine” ran excerpts from the “Diary of Anne Frank” in 1958, and your mother informed you about the Jedwabne pogrom in 1941, during which Poles murdered their Jewish neighbors, among them your relatives. How did you evolve from this legacy of victimization to a celebration of Jewishness?

I think it was just sort of in my nature. In a way, although I am essentially a very shy person, if you can believe it, there’s a part of me that is confrontational. I thought it was important to stress my Jewish identity in the face of massive indifference or anti-Semitism. There may be in this an element of Jews as tummlers and upsetters of apple carts.

Starting at age nine, you played Hebrew folk songs and blues on the guitar at Jewish nursing homes and the Jewish Community Center of Syracuse, but your first professional gig was in 1973 in Vienna, for the European premiere of Leonard Bernstein’s “Mass,” where you performed alongside the American Jewish film historian Annette Insdorf, who was in the chorus. Even some Bernstein fans found “Mass” a bit of a mess; did you admire the work itself?

I did. I’m a strong advocate of that and it was reaffirmed about a year ago when a [Ravinia Festival 2019 production] from Wolf Trap was shown on PBS and it brought it back to me how beautiful the writing is. It has some of Bernstein’s most indelible melodies and orchestrations. What he was trying to accomplish was a brave gesture. I could see where some people see it as a farrago of disparate elements, as he was trying to combine rock and classical. But I am a comparable mongrel sensibility, so I agree with it.

As a young musician, your favorite writing about rock was what you’ve called “hilariously abstruse over-intellectualized analysis” by Sandy Pearlman and Richard Meltzer. Was it amusing that American Jewish journalists were evaluating rock with Talmudic weightiness?

Probably so. I thought that the idea of combining ponderous philosophical concepts to something as mundane and quotidian as rock and roll was fascinating. I remember reading Meltzer in “Crawdaddy,” an amazing mind and he was speaking to me. I have a Jewish mind in that way; when confronted with the abyss, I tend to laugh.

Your mentor Captain Beefheart (Don Van Vliet) called you and your fellow musician Moris Tepper his “Jewish guitar army” and claimed to prefer working with Jewish musicians instead of African Americans because the former “understand suffering.” Insofar as Van Vliet reportedly inflicted suffering on his bandmates, can his claim be taken seriously? And do Jews understand suffering more than African Americans?

I mean look, [his statement] just tickled my funny bone at the time. Beefheart was responsible for writing a piece called “Dachau Blues,” one of the most serious pieces about the Holocaust that is not in the classical domain. He included that on his magnum opus, “Trout Mask Replica” and I thought it was incredibly brave and a serious statement.

On your album “Chase the Devil,” there’s a blues version of the Jewish folk song “Hinay Ma Tov.” What is bluesy about a song inspired by Psalm 133, about how good and pleasant it is when God’s people live together in unity? Is it because disappointingly, people tend not to live in unity?

You see, here’s the drill about the blues. The blues to me embodies not just tragic emotion but also a whoop of joy. George Gershwin has happy blues, like the Prelude No. 2 In C Sharp Minor used in “The Plot Against America” on HBO.

The title of your 2012 album, “The Ordeal of Civility” was borrowed from a 1987 book by the eccentric Catholic sociologist J. M. Cuddihy, “Ordeal of Civility: Freud, Marx, Lévi-Strauss, and the Jewish Struggle With Modernity.” Cuddihy argued that the analytical ideologies developed by Freud, Marx, and Lévi-Strauss were rebellions against the culture and demands of a Gentile-dominated Europe, which I doubt Lévi-Strauss, for one, would have agreed with. How was this viewpoint expressed in the album?

I wasn’t really trying to communicate anything but the rebellious, somewhat revolutionary undercurrent of Jewish thought that goes against the grain. In the art that I like, there is an attempt to wake people out of their torpor.

Among modern mystics, you’ve expressed admiration for the English writer Wyndham Lewis. Although Lewis reconsidered his Fascist and anti-Semitic views shortly before World War II, you aren’t troubled by the stereotypical Jewish villains in his earlier novels “Tarr” and “The Apes of God”?

Look, I collect first editions of [Lewis’] books and some of his art. I wasn’t really bothered by that. I understand that some people are offended by it, but I look at the overall arc of his career. There was always a contradicting of himself; he could see different sides of a question. He liked to get up people’s noses, especially the Bloomsbury Group. Like Walt Whitman, he accepted self-contradiction.

How did your collaboration with Allen Ginsberg occur?

Ed Sanders of the Fugs invited me to lead an ensemble at the Poetry Project at St. Mark’s Church with various poets on the theme of Amazing Grace. It was a bit of an endurance test, and I worked with Allen there. When I was in high school, I had Ginsberg posters in my room of him with his Uncle Sam hat, so he was kind of like a father figure. Later he told me he wanted me to play guitar while he sang a poem, “The Ballad of the Skeletons.” This was [Ginsberg] trying to do something like [Bob Dylan’s] “Subterranean Homesick Blues.” It was rapping a little, very jaunty, not like when he read poems accompanying himself on the harmonium. Listen, he was a great guy.

He collaborated with Leonard Bernstein, Allen Ginsberg and Captain Beefheart — can you name this guitarist?