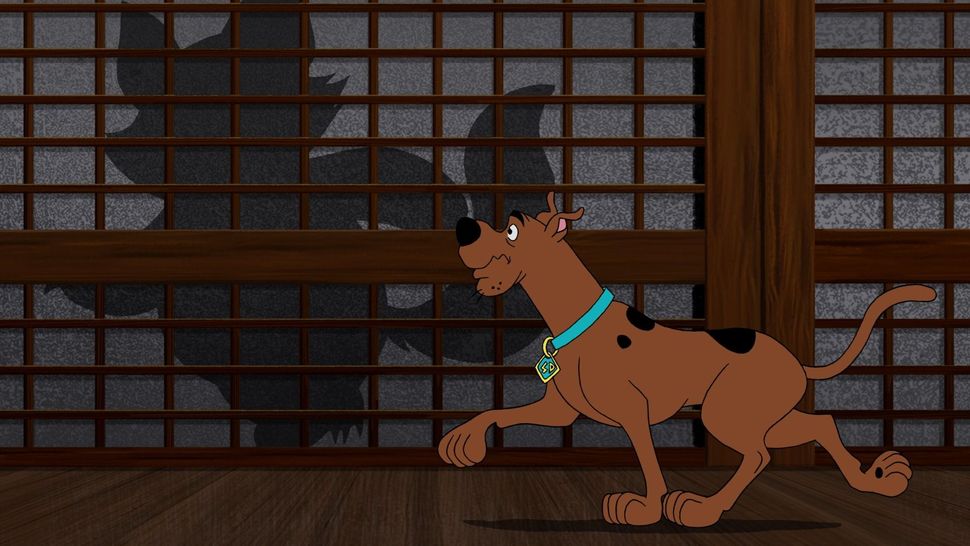 The American Jewish animator and producer Joe Ruby, who co-created the TV series character Scooby-Doo, died on August 26 at age 87. His family announced in The Los Angeles Times the following day that Ruby’s “Jewish faith played an increasingly important role in his life, and Joe was bar mitzvahed at the age of thirty-nine.”

There is nothing belated about Scooby-Doo, an anthropomorphic Great Dane who enjoys fressing sandwiches. According to animation historians, the show premiered in September 1969 as a non-violent alternative at a time of assassinations, war, and other American tragedies.

Fans have an inexhaustible appetite for the series, and a new direct-to-video film, “Happy Halloween, Scooby-Doo!” will be released on October 6. In the intervening decades, it thrived despite fairly simple, if comforting, plots about apparently spooky goings-on explained by young sleuths as being caused by adult nogoodniks in disguise.

These repetitive story lines, with villains grumbling about pesky meddling kids, appealed to viewers of all ages, with many Jews among them. The anthropologist Eric Silverman’s “Cultural History of Jewish Dress” (2013) points out that a “young boy’s tallit katan is now as likely to display” Scooby-Doo as the “Hebrew alphabet and Torah scrolls.”

Adult mavens were also drawn to the stories. The US astronomer Carl Sagan, of Ukrainian Jewish origin, praised Scooby-Doo in his “Demon-Haunted World: Science as our Candle in the Darkness.” (1995)

According to Sagan, Scooby encourages youngsters to find reasonable explanations for strange goings-on, rather than looking to the supernatural. Sagan specified that unlike “The X Files,” drenched in paranormal hogwash, “much closer to reality, as well as a much greater public service, would be an adult series (‘Scooby-Doo’ does it for children) in which paranormal claims are systematically investigated and every case is found to be explicable in prosaic terms.”

As part of its civic contribution, and doubtless due to Joe Ruby’s proud ethnic identity, repeated references to Yiddishkeit appear in the Scooby-Doo TV series and comic books.

In 2003, “The Pakn Treger” (itinerant book peddler) a publication of the Yiddish Book Center, noted that the Golem had appeared in “Scooby-Doo.”

Indeed, in Scooby-Doo issue #3, published by DC Comics in August 1997, a yellow-eyed Golem with Hebrew letters inscribed on its forehead reading Emet (truth) was used by Levi Levy, a robot builder, to attack a rabbi. Levy’s aim was to prove that the Golem was doing the bidding of Naamah the demon queen, his villainous alter ego, by disrupting a synagogue wedding.

The children establish that Levy wanted the synagogue to be replaced by a robot factory. The ultimate triumph of the rabbi and his flock must have been akin to that felt by Joe Ruby’s congregation when he was finally bar mitzvahed.

The show regularly cites Jewish lore in identifying mystical characters. “Night on Haunted Mountain,” an episode from 2012, has the gang discover a flying phantom called Dark Lilith after a female demon figure in Jewish mythology.

Other Jewish associations in the series are less fraught. Velma Dinkley, one of the kids in the crime-solving group, enjoys listening to Klezmer music and habitually exclaims “Oy” and “Oy gevalt.”
This past July, some of Scooby-Doo’s creative staff further revealed to “Buzzfeed” that she was intended to be a lesbian.

Generally, Jewish identity is accepted in a natural way, as in Scooby-Doo issue #45, published in February 2001. The rich and fashionable former cheerleader Daphne Blake explains that her mother is Jewish, and her uncle is named Saul Slotnik. In the same comic strip narrative, a jeweler named Hesh Moskowitz is featured.

Jewish girls named Chana and Miriam are among the dramatis personae in Scooby-Doo, Where Are You? issue #28 published in December 2012, about a ghost terrorizing a Chanukah celebration.

Small wonder that Scooby-Doo has attracted the attention of Jewish comedy writers, some of whom express peculiarly dark humor about the characters. The American animated stop motion comedy series “Robot Chicken” is produced by Seth Green and Matthew Senreich and co-written by Douglas Goldstein. “Robot Chicken” broadcast an episode with a skit inappositely combining Scooby’s All-Star Laff-A-Lympics, a spoof of the Olympics and the ABC primetime series Battle of the Network Stars, with the Steven Spielberg film “Munich” (2005).

Of course, Spielberg’s “Munich” is no joking matter, about the Israeli government’s retaliation against the PLO after the Munich massacre during the 1972 Summer Olympics.

The deliberate tastelessness of “Robot Chicken” accusing the protagonist’s nephew, the Great Dane puppy Scrappy-Doo, of participating in the Munich massacre is matched by the satirists calling his uncle “Scooby-Jew” because he hondles over the number of snacks he will receive.

Blaming Piven for appearing in one of the lesser direct-to-video films in the series, “Scooby Doo in Where’s My Mummy?” Sherman explains that the actor “voices a character named Rock Rivers, who probably isn’t Jewish, but nevertheless Mr. Piven’s presence in the film definitely reinforces the stereotype that a Jew will do anything for money.”

The extrapolation from Scooby-Doo by Jewish writers is taken a step further in literary form by the English Jewish novelist Will Self. Self’s delirious “Walking to Hollywood” (2011) depicts surreal visions befitting the La La Land satire “Day of the Locust” by Nathanael West (born Nathan Weinstein).

Self describes Scooby-Doo as participating on and off film sets in strange violent visions:
“I was filled only with my love for Scooby, who reared up on his hind legs…He licked me in gratitude, his tongue curling right round my tired face. ‘Scherlupp!’ ‘Nice work, boy,’ I told him… Still on his hind legs, Scooby wrapped his foreleg tightly in my arm and we walked to the enormous 007 sound stage, picking our way between the loops and coils of fire hose… Doubled over, the stunt double ducks beneath the Wagnerian curtain of roaring flame… summoning a camera that comes nosing in further to capture Scooby and me, trapped in the pit, the Evian bottles melting all Dalí about us. Scooby, mute and suppliant, yet not reproachful: he trusted me, I had liberated him from the set of The Wolfman, we danced on blue screen and now it’s ended up like this!”

With his apocalyptic tone, Self’s aggressive imagery involving what he calls the “quadrumanous cartoon dog” may have been sparked by the very gentleness of the series and comic books.

Genial Jewish voices dramatized the characters in the series. Scrappy-Doo was first performed by Lennie Weinrib, a comedian noted for his LP “Have A Jewish Christmas…?” Even the character Mr. Leech, a smuggler, looks and speaks enticingly like the Hungarian Jewish actor Peter Lorre (born László Löwenstein).

As Carl Sagan and other educators have perceived, Joe Ruby’s creation encourages children to find nonviolent solutions cooperatively, which is still surely a lesson worth learning in 2020, and a splendid legacy for the animator.