The rich, complicated history of Jews and bowling 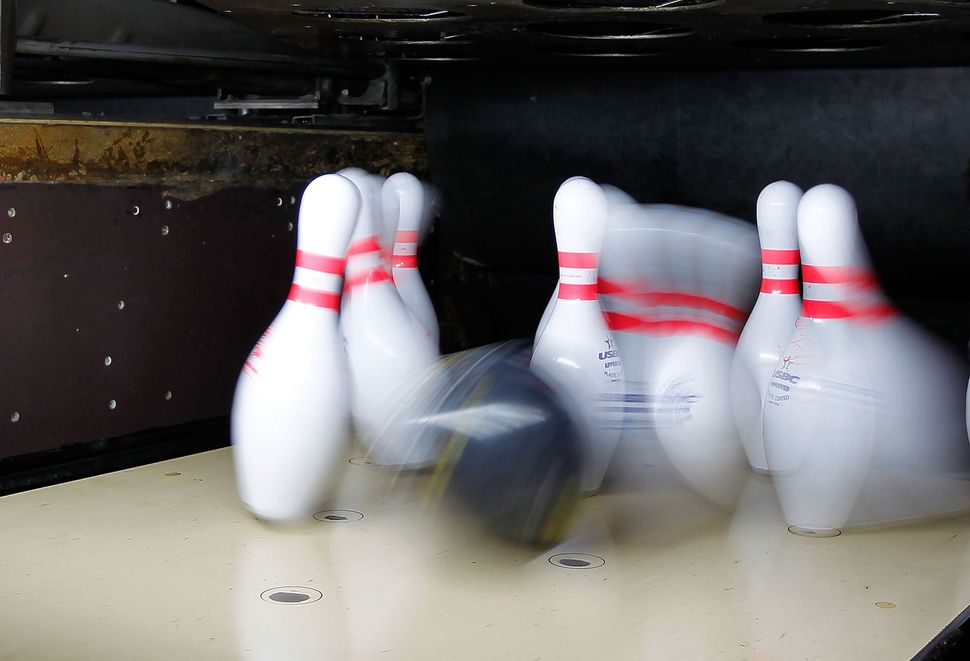 September 9 marks the 125th anniversary of the formation of The American Bowling Congress (ABC), codifying US bowling standards and regulations, a group with surprisingly powerful Jewish resonance.

The German Jewish literary historian Gustav Karpeles noted that Moses Mendelssohn the 18th century Jewish Enlightenment thinker, was so obsessed with bowling that he referred to it metaphorically, even at life-and-death moments.

After Mendelssohn slated poems written by Frederick the Great, King of Prussia, he was forced to justify himself, as a Jew, to government authorities. Mendelssohn said, “When I go bowling with Christians, I knock down all the pins whenever I can… Bowling is a recreation for my body, writing for my mind.”

In another version of the story, Mendelssohn told Frederick himself, “Whoever writes verses is playing at ninepins; and whoever plays at ninepins, whether king or peasant, must allow the pinboy to tell him how he bowls.”

With such distinguished precedent, it may not be surprising that as Joseph Siegman’s “Jewish Sports Legends” reminds us, modern bowling equipment was innovated by a company founded by the Swiss Jewish entrepreneur John Moses Brunswick (1819-1886). Born in Bremgarten in the northern canton of Aargau, historically the only area in Switzerland where Jews were allowed to live, Brunswick emigrated to America in the 1830s. 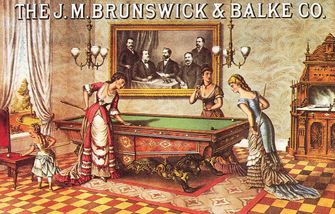 At first, bowling was considered a pastime for German-American drinkers in urban saloons, as historian Andrew Hurley has noted. Bensinger combined business activities with executive board membership of the Chicago Sinai Congregation and participation in The Standard Club,, a mainly Jewish fraternal organization; he personally represented a symbiosis between bowling and Jewish social activism.

Bensinger was a mediocre bowler himself, but Louis B. Stein (1858-1949), of Dutch Jewish origin, another ABC cofounder, was highly skilled, and proposed that bowling be scored on a 300-point system instead of the then-customary 200-point rule. Stein likewise suggested a maximum allowed weight for a bowling ball.

While the halacha of bowling was being established, its haggadah was being assured by Samuel Karpf (1866–1923) secretary of the ABC. With these vigilant Jewish authorities at its birth in the modern era, bowling had unsurpassed Yiddishkeit as an American recreation.

By 1895 in Buffalo, historian Lawrence Ginsburg states, the favorite social activities of privileged young Jewish men and women were “almost exclusively bowling and whist.” “The Columbia History of Jews and Judaism in America” concurs that in the late 19th century, middle-class Jewish women kvelled in bowling leagues for those who were “dowered with leisure.”

Jewish bowling champs were crowned during the 1920s and 30s, and a further boom occurred after World War II, when returning GIs made the sport explode in popularity.

The Denver Jewish Bowling League sponsored by B’nai B’rith, was formed c.1947, continuing the assimilation of American Jews in pastimes they had encountered at US Armed Forces recreational facilities. In August 1949, “The National Jewish Post” reported that the “Ball & Chain Bowling League, composed of young Jewish married couples,” was recruiting new members.

In the 1950s, bowling alleys were installed in Jewish community centers in Harrisburg, Pennsylvania, and Portland, Maine.

The Jewish community of Ames, Iowa even found spiritual shelter in the early 1960s in a reconverted bowling alley which served as a synagogue, as journalist Jeffrey Zaslow described.

Mark Roth (b. 1951), Barry Asher (b. 1946), and Marshall Holman (b.1954) likewise won fame. Asher later made a splash as technical advisor for Joel and Ethan Coen’s “The Big Lebowski” (1998) and was seen bowling in the film’s final scene. Asher still attends meetings of the Lebowski Fest, an annual reunion of obsessive fans of the screen comedy

With this prominence came some angst. In May 1992, The Detroit Jewish News explained that Holman was “suspended from 10 PBA tournaments after a series of conduct violations, including kicking a national television foul light. He also broke a bone in his right hand — his bowling hand — after punching a wall because he left a 10-pin standing in the Firestone Tournament of Champions.”

In April 1980, Sports Illustrated’s Herm Weiskopf further described Holman as a “perfect boor. A perfect twerp. A perfect pest. A perfect pain in the you-know-what” and pointed out that Holman “also enjoys stirring up fans by bending over and presenting his posterior.”

Holman self-justifyingly detailed to Weiskopf anti-Semitic abuse he had received from the public: “A group in Chicago wrote that they were disgusted with me, slapped me in the face for being Jewish and wished that I’d get cancer.”

Roth, who sported a white-gold, angular Star of David necklace, told Sports Illustrated in May 1978, “I used to be really crazy. I kicked ball racks, I cursed and lost my temper at the lanes. Now I’ve quieted down. Sometimes all I do after a bad night is get in the shower and scream.”

Amid all the drama, some naysayers voiced their opinions. In a 1971 essay cited by Paul Kriwaczek, Jacob Neusner evoked bowling to decry the secular vacuity of American Jewish life, asking, “To whom shall we ask the ultimate questions of meaning? To what shall we apply the transcendent symbols of exile and alienation? To Bar Mitzvah factories and bowling clubs?”

Had Neusner really talked to American Jewish bowlers, he might have received some lively and illuminating responsa.

Despite such carping and the ordeals of Jewish overachievers, bowling retains ever-more social importance for Jews today. Gary Saltzman, president of B’nai B’rith International, has outlined how he got his start networking with the Denver Jewish community by joining the B’nai B’rith Lodge 171’s bowling league.

Members of the Atlanta Jewish Bowling League cofounded by Arthur Stoltz, who died last year at age 96, are no less ardent, and Brooklyn Bowl, a Williamsburg bowling alley has been offering a so-called Bowl Hashanah to draw attendees to a Jewish New Year morning service.

Such efforts in solidarity counter what Jewish public affairs and education experts such as Manfred Gerstenfeld and Jonathan Krasner refer to as “bowling alone,” insofar as most Jews no longer join religious-based civic or political organizations. The phrase “bowling alone” derives from a 2000 study by Robert Putnam describing the more general trend of social fragmentation of America.

Still, hope remains in Bowl Hashanah, local JCC bowling teams, and the Maccabi USA Open Tenpin Bowling team’s participation in the Maccabiah Games. These continuations of a past legacy echo a time when bowling was so impactful for American Jews that as Matthew Silver, biographer of Jewish community leader Louis Marshall (1856–1929) describes it, some even grew to resemble its components: “Being noticeably rounder around the hips, [Louis Marshall’s] short, stocky frame contoured as a bowling pin.”

Benjamin Ivry is a frequent contributor to The Forward.

The rich, complicated history of Jews and bowling