There’s a story about Dwight D. Eisenhower that has become the stuff of legend. After witnessing the horrors of Ohrdruf concentration camp in Germany as the supreme commander of the Allied Expeditionary Force in Europe, he told his men who liberated the camps to collect testimony and film and photograph everything, because “the day will come when some son of a bitch will say this never happened.”

The quote may be apocryphal, but the orders weren’t. Eisenhower was prescient, as he was when he, as 34th president, warned of the military industrial complex in his 1961 farewell address. President Eisenhower played an outsized role in preserving history and today, Sept. 17, his own memorial in Washington D.C. will finally be dedicated.

Designed by architect Frank Gehry, the monument is composed of near-life-sized bronze sculptures of Eisenhower: Ike as a smiling child, hugging his knees and gazing off at his future selves; the five-star general addressing troops before D-Day, portions of his speech carved in a limestone corner behind him; President Eisenhower speaking to aides, huddled at attention near the Resolute desk backed by a map of the world.

It’s an approachable memorial in a capital that often opts for the austere or imposing in presidential tributes, reflecting Eisenhower’s own everyman quality. Speaking to NPR, Gehry recalled Eisenhower’s comment about a future memorial.

“He had said to his family that he didn’t want to be on a horse,” Gehry said. “And I understood that. I just fell in love with the guy.” 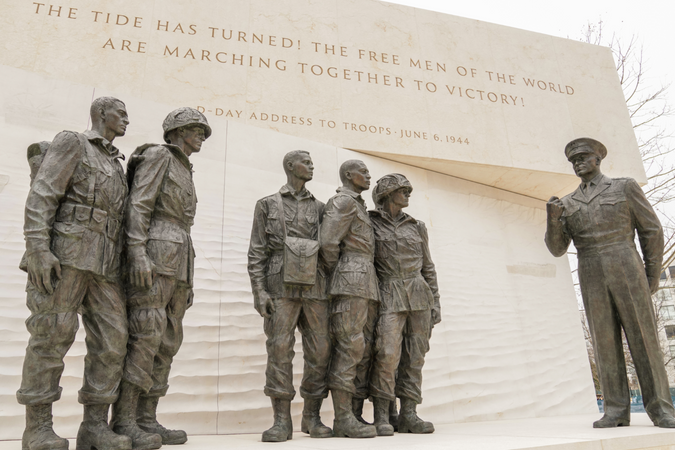 But not everyone was immediately won over by Gehry’s design. The memorial, in the works for over 20 years, met with many delays. As The New York Times has reported, Eisenhower’s family balked at Gehry’s initial plan to place the barefoot figure of Ike as a child between the two tableaux of him as general and commander-in-chief. The figures were to be ensconced by massive pillars and tapestries made of woven-metal cables bearing images of the Kansas plains.

The Eisenhowers and the National Civic Art Society objected to placing the president’s childhood at the center of the monument and to the tapestry’s aesthetic and overemphasis on his roots. In the end, the little Ike statue was given shoes, and placed off to the side before a low wall inscribed with his June 22, 1945 homecoming speech. The finished tapestry, hanging before the facade of the Department of Education building, now bears an outline of the cliffs of Normandy, where Eisenhower led troops to storm the beaches at a pivotal point in the war. The National Civic Art Society told The Times it still views the memorial “an uninspiring, gargantuan failure,” while family members told the paper of record they are pleased with the final product. 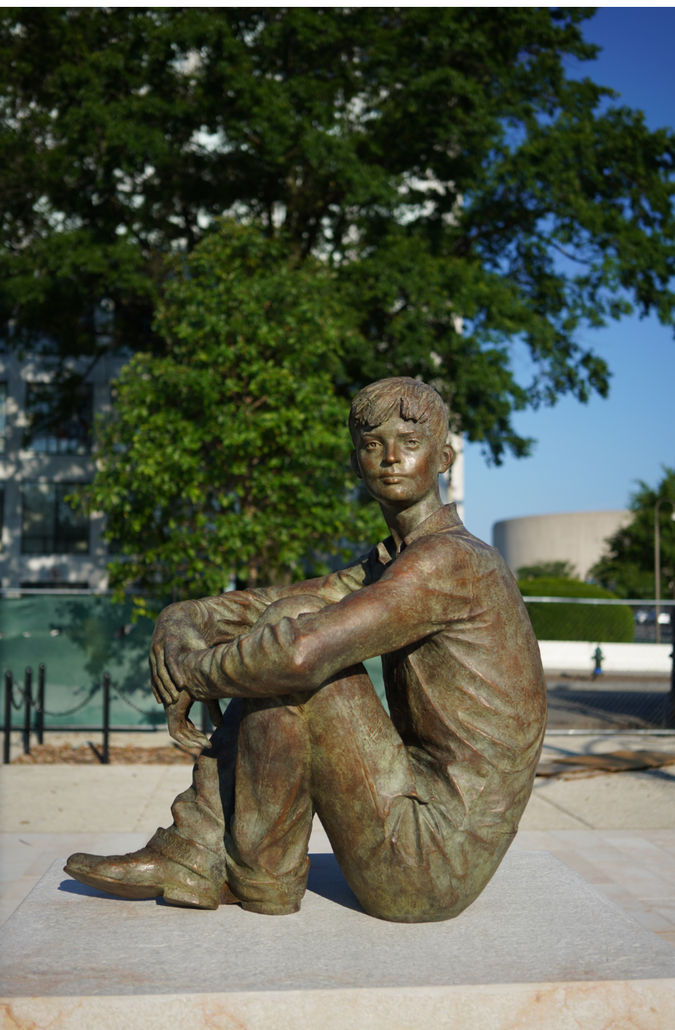 Susan Eisenhower, one of the late president’s granddaughters, called him a “timely figure” during a time of divisive politics and the vigorous reassessment of many monumental figures.

“He united a fractious and frightened America, and this sort of calming steadiness that he represented is something that is also worth reflecting on and reminding ourselves of,” Susan Eisenhower told The Times. “Just because the 1950s look like a quiet time, it didn’t just happen that way. That was his underlying commitment, to keep this country united.” 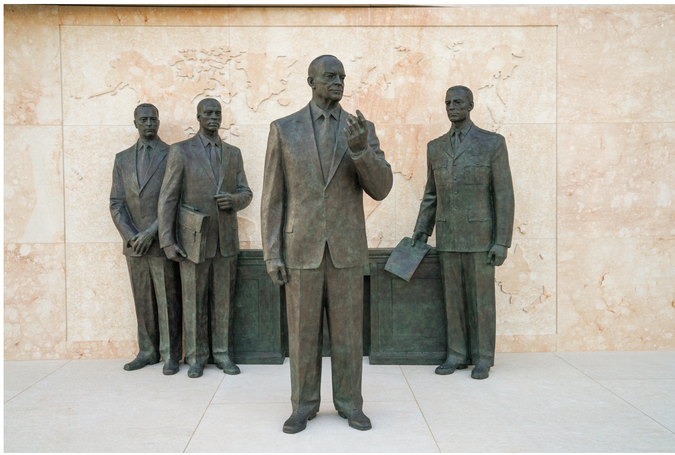 The meaning of the memorial, for which Congress withheld funding for years, was in question with the design disputes. The friction was between whether to underline Eisenhower as the Abilene, Kansas boy who rose from humble origins, or to stress his adult career of military victory, international diplomacy, bipartisanship and strides in civil rights, including the desegregation of the military and schools. But there is another angle from which Eisenhower, and the monument, might be appreciated.

In a statement, the United States Holocaust Memorial Museum, a short distance from where the monument stands, called it a complement to its own Eisenhower Plaza, which displays the liberating division flags.

“General Eisenhower led the invasion of the European continent that would bring the war in Europe to an end and in so doing free those remaining Jews and other victims who had survived the Nazi onslaught,” the statement read, noting Eisenhower’s knowing mention of the “Nazi tyranny over the oppressed peoples of Europe” in his D-Day address, an acknowledgment that his men were fighting for more than just freedom. 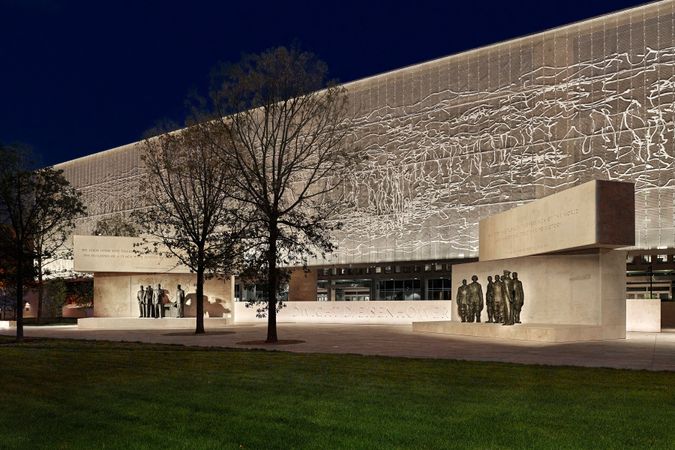 The Eisenhower Memorial at night. The metal cable “tapestry” bears an outline of the cliffs of Normandy. Image by Image courtesy of the Eisenhower Memorial Commission; Photograph by Karchmer; Memorial design by Gehry Partners, LLP; Tapestry by Tomas Osinski; Sculpture by Sergey Eylanbekov; Inscriptions by Nick Benson

10 months later, Eisenhower saw the full extent of Nazi atrocities, cabling General George C. Marshall after his visit to Ohrdruf to say, “The visual evidence and the verbal testimony of starvation, cruelty and bestiality were so overpowering as to leave me a bit sick…. I made the visit deliberately, in order to be in position to give firsthand evidence of these things if ever, in the near future, there develops a tendency to charge these allegations merely to ‘propaganda.’”

But he realized his own eyes were not enough. Days after his first cable Eisenhower requested journalists and members of Congress be flown to the site to bear witness, writing to Marshall “I assure you that whatever has been printed on them to date has been understatement.”

“He anticipated Holocaust denial and distortion,” the USHMM wrote. To that end, he took every opportunity to document the truth.

At a time when most American adults don’t know that 6 million Jews died in the Holocaust, and more than one in 10 believe the Jews were responsible for their own genocide, the unveiling of Eisenhower’s monument can serve as more than just a tribute to his place in history, but his own commitment to preserving it.