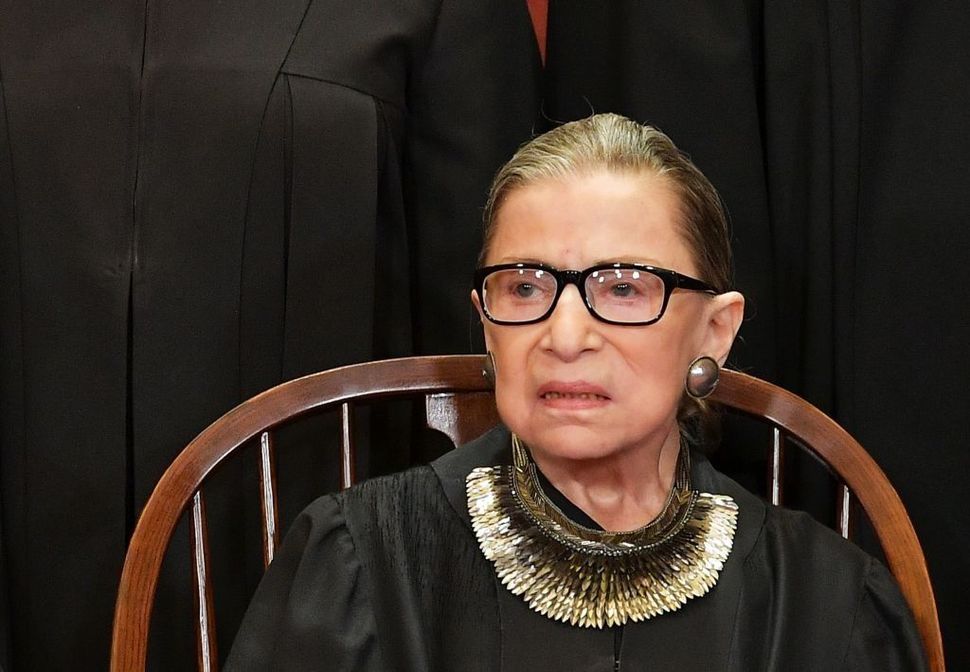 Ruth Bader Ginsburg’s nickname “The Notorious R.B.G.” was a humorous allusion to The Notorious B.I.G., the stage name of the rapper Biggie Smalls (born Christopher Wallace). Yet as her admirers know, Ginsburg, who died on September 18 at age 87, was more attached to classical music, especially opera.

Born in Brooklyn, her first such experience was in 1944 at age 11, when she attended a one-hour children’s version of Ponchielli’s “La Gioconda” abridged and presented by the African American conductor Dean Dixon.

Her family encouraged early engagement with all the arts, including literature and modern art. In July 2015, Ginsburg would admit with typical understatement to “Opera America” that “La Gioconda” was “not the most likely choice for a first opera.”

A tale of passion, suicide, and other mayhem, its over-the-top theatricality drove some Jewish listeners, like the song parodist Allan Sherman, into the comforting arms of comedy. Sherman’s rewrite of the famous “Dance of the Hours” from “La Gioconda” became the popular lampoon “Hello Muddah, Hello Fadduh,” about a young schlimazel at summer camp.

By contrast, Ginsburg recalled being “spellbound” and took the opera utterly seriously. She would later claim that her ambition to be a “diva” was frustrated by lack of vocal talent, but few would deny that in her professional domain, she achieved this status.

Typically, her instinct was not to hoard opera recordings egoistically, but instead spread the good news to family and friends. She introduced her daughter Jane to live opera performance when the latter was only four years old.

Unfortunately, the choice of repertoire, Verdi’s “Il Trovatore” staged by New York’s Amato Opera company, offended the ears of the moppet, who early in the proceedings, “rose to her full height and screamed at the top of her lungs.”

Ever pragmatic but also forward-thinking, Ginsburg decided to wait four more years, and tried again with a Metropolitan Opera production of Mozart’s “Così fan tutte” which proved more palatable to the youngster.

This time, she prepared Jane by methodically playing the family’s recording of the opera and reading through its libretto repeatedly, even providing special formal children’s wear for the occasion to add to the sense of a special treat.

These masterful educational efforts would be reiterated in her decades on the Supreme Court spent trying to persuade colleagues of the rightness of her humanist beliefs, as firmly cherished as her love of opera.

One such was Antonin Scalia, who also adored opera; bloodcurdling librettos might be said to reflect Scalia’s legal penchant for “delight[ing] in pointing out the terrible things the law permitted people to do to one another,” as the historian Nathaniel Frank noted.

Undaunted, Ginsburg developed a sincere friendship with Scalia that was in good part opera-based. This alliance was catnip for far-right ideologues, and after her death, the trite formula about Ginsburg and Scalia, “They both loved opera, law and the U.S.A.” was repeated word-for-word in the Twitter feeds of Rudy Giuliani and Meghan McCain.

Yet the Ginsburg-Scalia connection was genuine, and they appeared as supernumeraries in a 1994 Washington National Opera (WNO) production of Richard Strauss’s “Ariadne auf Naxos.” She and Scalia were also onstage as extras in 2009 in a new WNO staging of the same opera.

Between these two adventures, Ginsburg extended the potential of opera to cement collegial friendships in 2003, when she and fellow Justices Stephen Breyer and Anthony Kennedy went onstage during the party scene in Johann Strauss’s “Die Fledermaus,” again at WNO.

So it was no surprise in 2015 when the composer Derrick Wang created an opera, “Scalia/Ginsburg” inspired by their courtroom opinions. An excerpt may be heard on a CD from Cedille Records, “Notorious RBG in Song,” also including a tribute lieder cycle conceived by the soprano Patrice Michaels, her daughter-in-law.

The excellent Chicago-based Cedille small label was founded by Ginsburg’s son James, who unlike his sister, took naturally to classical music early on, and worked as a supernumerary at WNO during his high school years.

The warmth and charm of this mishpocheh-style opera fandom does not completely remove questions about similarities between grandiose operatic costumes and theatrical-looking judicial robes, much mocked by the English novelist and barrister John Mortimer.

Could opera-based friendship really make it possible to overlook Scalia’s views and his way of expressing them? Did opera smooth over differences about what has been diagnosed by some observers as Scalia’s loathing of gender minorities? Ginsburg stressed in an article from October 2011, posted on the website of the National Endowment for the Arts, that “Scalia/Ginsburg” is a comic opera, even if some of the Scalia-led Court’s decisions led to tragic consequences for Americans.

As if adding a final word, in November 2016, Ginsburg again appeared onstage, this time in a speaking role, delivering lines written by herself, interpolated in Donizetti’s frothy “Daughter of the Regiment” at the Kennedy Center. Playing the Duchess of Krakenthorp, a buffoonishly stuffy noblewoman, she offered a series of pointed observations in the context of a list of requirements for suitors asking to marry into her family.

With criteria that sound serious despite the joking context, Ginsburg called for persons with “open but not empty minds. The best are willing to listen and learn. No surprise, then, that the most valorous Krakenthorpians have been women… Applicants seeking a station so exalted must have the fortitude to undergo strict scrutiny. Their character must be beyond reproach.”

As a zinger against the current occupant of the White House’s birther campaigns, Ginsburg added a demand for a birth certificate, noting, “We must take precautions against fraudulent pretenders.”

She later explained at the Jewish Federations of North America 2016 General Assembly: “It’s amazing that I was on an opera stage because when I was in grade school the class was separated into robins who sang out and sparrows who mouthed the words — I was a sparrow.”

In her 2016 appearance, Ginsburg showed that for her, opera was no mere escapist flight, but a vehicle for truth-telling and reminder of eternal virtues and values. Real life and death could easily intrude into the opera world, as Ginsburg found when she attended the Metropolitan Opera performance of Verdi’s “La Forza del Destino” in March 1960 when the American Jewish baritone Leonard Warren (born Warenoff) collapsed and died after singing an aria.

At the present low point in American history, when Ruth Bader Ginsburg’s death will surely lead to vicious infighting to replace her with yet another right-wing ideologue, a ray of hope may be found in her oft-stated admiration for Beethoven’s opera “Fidelio.” With its themes of liberty, faithfulness, justice and idealism, “Fidelio” gave her the “greatest hope for the future.” The story of a political prisoner set free through his wife’s courage, the opera implies that with a level of resolve akin to Ginsburg’s own, America’s current bondage may at some point give way to freedom’s light.