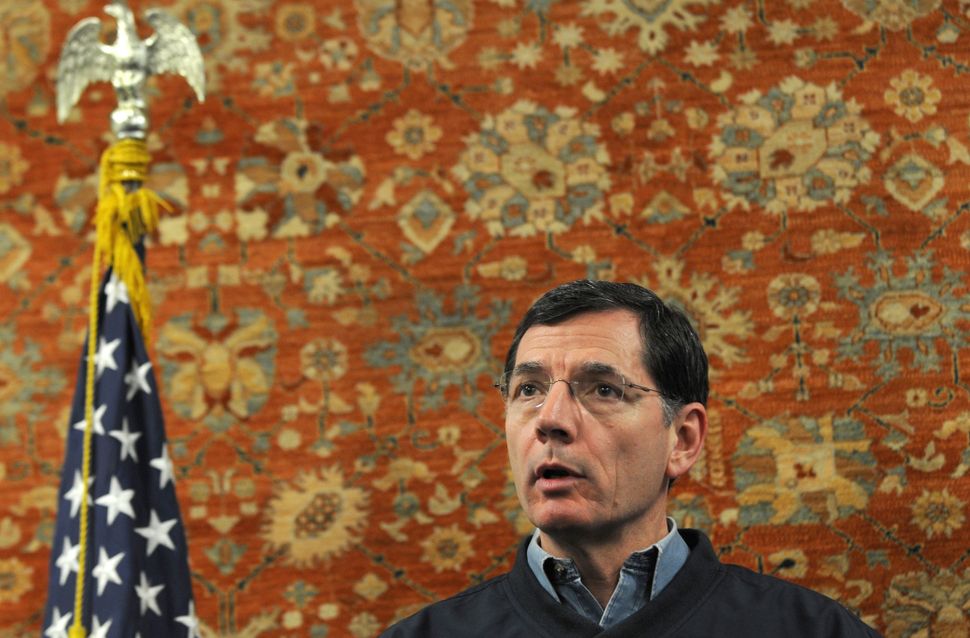 “There’s a materialistic difference between 2016 and 2020,” Senator John Barrasso of Wyoming, the number three ranking Senate Republican, said on the “PBS News Hour,” speaking on the question of appointing Supreme Court judges in those two election years.

First, I thought it was a slip of the tongue. But now I think it is quite revealing, and an appropriate statement to consider in the days after Yom Kippur.

“Materialistic,” according to the Merriam-Webster dictionary, means “overly concerned or preoccupied with material possessions rather than with intellectual or spiritual things.”

This is an apt word to describe much of what is most disturbing in our current moment.

The response to the coronavirus pandemic has certainly had “materialistic” elements. Consider the motivation behind policies that forced meatpacking workers to keep working, and mandated that college students, faculty and staff to return to campus despite the dangers of having so many people in close quarters.

And what about not extending government unemployment assistance at a time when people are starving? “Materialistic” might describe it.

Of course, there’s a “materialistic” element to Supreme Court fights, with donations pouring in at the thought of the Court moving in a particular direction.

Contemplating the question of whether we are in a “materialistic” moment, and whether Barrasso was right that 2020 is somehow more “materialistic” than 2016, I find myself returning to the “rather than with intellectual or spiritual things” part of the Merriam-Webster definition of materialism.

Since 2016 we have absolutely witnessed a denigration of science — an “intellectual” thing, which is how the dictionary defines the opposite of materialistic. And we have also witnessed a conspicuous absence of public mourning for national tragedies — a “spiritual” thing.

Imagine any other American President not mourning the deaths of over 200,000 Americans.

But Senator Barrasso likely meant “material” and not “materialistic.”

Well, that’s a bit better but not entirely in the clear. Merriam-Webster offers a definition of “material” as “having real importance or great consequences,” and certainly a lifetime Supreme Court appointment has that potential.

But the dictionary definition of “material” is also about the same cold hard status obsession of “materialistic,” since “material” also means “relating to or concerned with physical rather than spiritual or intellectual things.”

Same idea — minimizing the spiritual, and de-prioritizing the intellectual. Not a bad summary of 2020, and not a bad diagnosis of what ails us.

The Barrasso interview took place after Justice Ruth Bader Ginsburg’s death, but before her burial. It has not been lost on anyone that Justice Ruth Bader Ginsburg died as Rosh Hashanah began; the nomination to replace her was announced on Shabbat. The ten days between Rosh Hashanah and Yom Kippur are always days of introspection and repentance in Jewish tradition, and this year, they were especially haunting as Ginsburg lay in the Capitol.

At its core, Yom Kippur challenges us to think about life and death, and to confront whether our understanding of what matters and what does not are just and true.

It asks us to question our own definitions.

This year, Yom Kippur itself was more private than public, with more of us than ever praying at home, and thinking about how we can lead ourselves into a more just place, in the time we have left on this earth.

The songs of Yom Kippur — often made of medieval poems, written in eras of plague and massacre, persecution and fear, and sounding especially haunting this year as we sang them in our homes — are all about the ephemeral nature of life, and the temporariness of man, the limitations of human strength. These songs are the very opposite of the egoism and worship of the power of the self that what we hear in every part of our political culture and popular culture.

The grammar of Yom Kippur is also especially resonant this year. Yom Kippur constantly makes use of the “we” — what my late, great teacher, the writer James Alan McPherson, called “the communal voice” — something conspicuously and hauntingly absent in our current moment.

“Materialistic,” by contrast, is me, me, me, and I think that’s why that word choice has stuck with me. I noticed that no one noticed. I felt how it was not news.

It is the kind of statement made acceptable by the President’s “I alone can fix it.” It has been echoed by “leaders” who focus on finances instead of lives, who promote the “I” over the “we,” and who redefine “material” — in the sense of “important” — as of all things, “materialistic”. Stripped of the ability to go inside a synagogue, pray in community, and so much else, at a time when more than 200,000 Americans are dead, millions are unemployed or battling ongoing serious illness, when world hunger is on the rise and the most vulnerable face losing everything, it’s hard to even notice a slip of the tongue like “materialistic.”

It’s hard to muster the strength to disagree.

But we must disagree. Yom Kippur emphasizes that what we say matters, and what we say can hurt. What we do and don’t do matters. And it defines “we” broadly and communally, so that another person’s words and actions — as well as inaction — are our problem.

This year, we consider how the tremendous losses of the past year are all our losses. And this is our chance to contemplate just how far “material,” as in important, should be from “materialism” as we write our own internal definition of justice, to carry us through the year ahead.

Aviya Kushner is The Forward’s language columnist and the author of The Grammar of God and the forthcoming Wolf Lamb Bomb. Follow her on Twitter @AviyaKushner