Helen Reddy — She was a Jewish woman; hear her roar 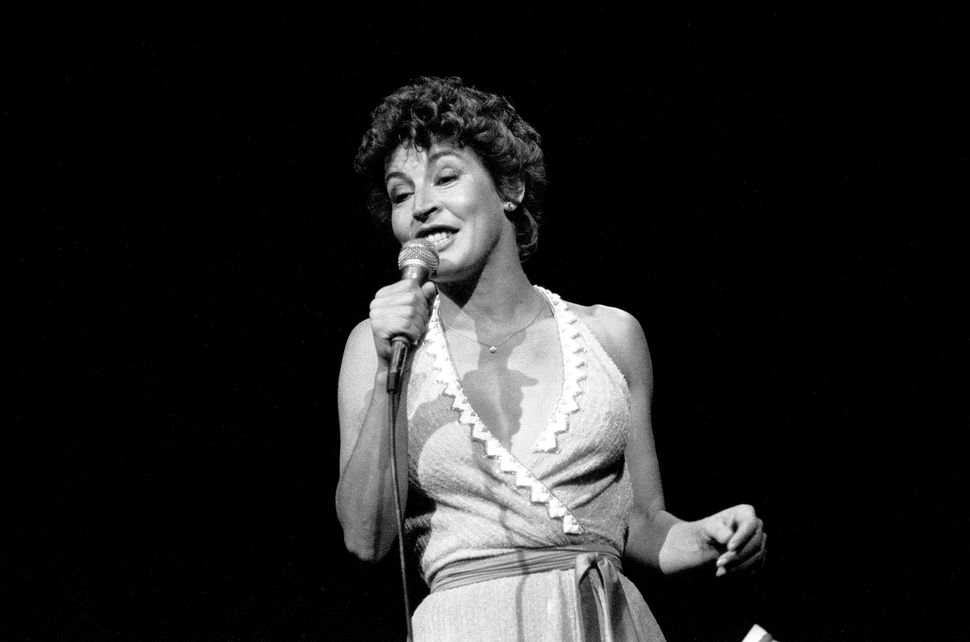 The Australian singer Helen Reddy, who died on September 29 at age 78, is best remembered for the 1972 feminist anthem “I Am Woman,” a hit with surprising Jewish resonance.

According to the “The Billboard Book of Number One Hits” Reddy was looking for positive songs about women to record, but decided that these did not exist, so she wrote her own lyric to be set to music by the Australian guitarist Ray Burton: “If I have to, I can do anything/ I am strong/ I am invincible/ I am woman.”

By the time “I am Woman” hit the charts, Reddy had already converted to Judaism to marry her Jewish manager Jeff Wald in 1968.

Rather than to the association with Wald, which proved impermanent and a cause of strife, Reddy attributed the inspiration for the friendly propagandistic text “I Am Woman” to her friendship with a fellow Aussie expat, the Jewish rock critic and feminist Lillian Roxon. Born Lillian Ropschitz to a family of Polish Jewish origin, Roxon gained a foothold in America due to a love affair with the Australian journalist Zalmenas (Zell) Rabin of Lithuanian Jewish origin, an early associate of Rupert Murdoch.

A rollicking and temperamental personality, Roxon gave Reddy a blueprint for how to conduct a showbiz life. Indeed, Reddy would prove her willingness to venture beyond the boundaries of song into raucous comedy, performing sketches on television with Don Rickles and George Burns, where she revealed a snappy way with a one-liner. Reddy would also share the bill in Las Vegas with comedian Joan Rivers.

Reddy’s low key, easy listening approach to concertizing did not enthrall every Jewish spectator. Her shows had no choreography or any spectacle other than her standing still and singing. The stasis onstage reportedly led rival diva Bette Midler to complain that Reddy “ought to be arrested for loitering in front of an orchestra.”

Jon Stratton’s “Jews, Race and Popular Music” reminds us that another naysayer was Renée Geyer an Australian singer of Hungarian and Slovak Jewish roots, who complained, “Oh, I hated ‘I Am Woman’… I’ve met Helen Reddy since and she’s a nice lady, but I wasn’t crazy about the obviousness of that song, of just the… anthemic thing of it, which is the very reason it was such a big hit.”

Instead of dwelling candidly on faith in womanhood, Geyer preferred an ironic approach, recording her own version of James Brown’s ultra-macho song “It’s a Man’s Man’s Man’s World.”

“Reddy is a white Australian. It was easier for her to be confrontational. Geyer makes her point as a Jewish woman using African-American vocal styling and by re-visioning one of the most well-known songs by one of the most significant African American male rhythm and blues singers.”

Yet when she recorded “I Am Woman,” Reddy too was a Jewish woman, and subsequent writers have accepted her as such. Barbara Sheklin Davis’s “100 Jewish Things to Do Before You Die” even places Reddy alongside Barbra Streisand, Neil Diamond, Leonard Bernstein, Bob Dylan, Simon & Garfunkel, Neil Sedaka, Barry Manilow, Adam Levine, and Debbie Friedman as “giants of the Jewish music field.”

Reddy’s name became so synonymous with feminist aspirations that in Letty Cottin Pogrebin’s novel “Single Jewish Male Seeking Soul Mate” a Greenwich Village community meeting set in 1984 where condescending words are spoken about women is described as “not the time or place for Helen Reddy.”

Reddy’s name also became a synonym of woke Jewish feminism through cover versions of “I Am Woman,” among them an outstanding one by the clarion voice of Eydie Gorme, of Sephardic Jewish background.

Exactly how much Yiddishkeit influenced Reddy’s artistry remains a private matter, insofar as a memoir published in 2006 focuses instead on her theories about reincarnation and other paranormal beliefs.

Yet in December 2000, long after Reddy’s contentious divorce from Wald, “The St. Louis Post-Dispatch” reported that “although Helen Reddy is Jewish, she has just released an album titled ‘The Best Christmas Ever.’…Reddy said she had stuck to her religious beliefs by making sure that no song mentioned Jesus.”

Whatever the extent of her religious observance, Reddy struck a chord with many Jewish listeners. The American feminist Betty Friedan (born Bettye Naomi Goldstein), would later recall a 1973 National Organization of Women (NOW) convention that closed with a performance of “I Am Woman”: “Suddenly women got out of their seats and started dancing around the hotel ballroom, joining hands in a circle that got larger and larger until maybe a thousand of us were dancing and singing: ‘There is nothing I can’t do … No price too great to pay … I am strong … I am invincible … I am woman.’ It was a spontaneous, beautiful expression of the exhilaration we all felt in those years, women really moving as women.”

Historian Ruth Rosen’s “The World Split Open: How the Modern Women’s Movement Changed America” lists Reddy’s Grammy award win for “I Am Woman” as a key historical event in a feminist chronology.

Perhaps the most moving instance of all was in the early 1970s, when Detroit-area Jewish attorney and activist Allyn Ravitz, lauded in “Feminists Who Changed America (1963-1975)”, organized a fundraiser to defend two women who had killed their male attackers in self-defense. Florence Ballard, one of the original members of The Supremes, sang an a cappella version of “I Am Woman.”

Ravitz’s daughter Jessica, in a reminiscence about her mother’s love of music, recalls that “in the moments when this lifetime activist connected with her fighting spirit, my mother sang Helen Reddy’s 1970s feminist anthem, ‘I Am Woman’ — a song I screamed out from the bathtub, thanks to her, before I was old enough to go to school.”

Reddy’s message as a progressive Australian feminist is all the more valuable in an America where broadcast and print media have been overtaken by Australian far-right ownership, doing untold damage to American freedoms.

Under these conditions, quibbles from Jewish singers such as Midler and Geyer become of secondary importance. In desperate times, inspiration is needed wherever it may be found, and Reddy’s song and example still have lessons to teach Jewish audiences in 2020.

Helen Reddy — She was a Jewish woman; hear her roar