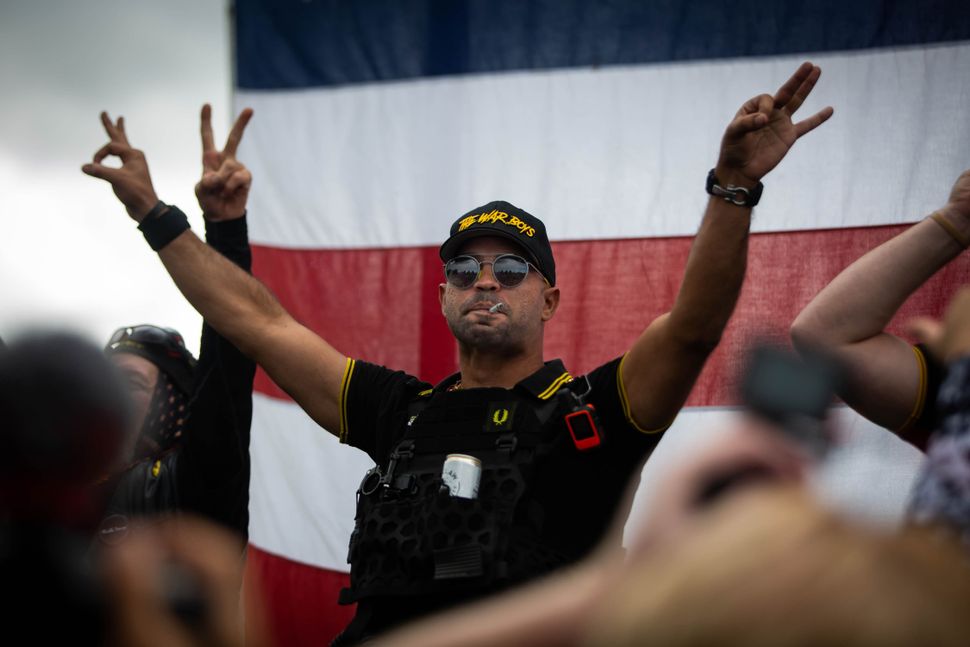 President Trump directly addressed white supremacists through language they understand as a direct command during the first Presidential debate. Asked to condemn white supremacy, Trump instead said “stand back and stand by”— immediately setting off alarm bells among extremism researchers who are familiar with these terms.

Alex Newhouse, an extremism researcher at the Center on Terrorism, Extremism, and Counterterrorism at the Middlebury Institute of International Studies in Monterey, California, made the meaning very plain in a tweet.

“As an extremism researcher, I can confidently say that telling militias, Proud Boys, and white supremacists to “stand by” will be taken quite literally as a call to prep with civil war,” he tweeted.

This was followed quickly by a chilling thread from Kathleen Belew, a history professor at the University of Chicago who studies the white power movement and is the author of “Bring the War Home: The White Power Movement and Paramilitary America.” Belew tweeted:

“Re “stand back and standby,” people who work in monitoring and de-radicalization and otherwise studying white power groups are sounding red alerts and sending emergency signals about increasing violence from now through the election, and after, regardless of winner.”

As Trump directly called for his supporters to come to the polls to watch the proceedings — a clear call to intimidate voters — Belew explained that this, too, is part of the white power strategy.

“This is a movement that has sought not only poll intimidation—although it has done that—but also major mass casualties. There is no reason to think that strategy will change,” Belew tweeted.

To make it crystal clear, Belew explained that this movement was behind the Oklahoma City bombing.

Meanwhile, the Proud Boys, a white supremacist group, wasted no time taking to social media and incorporating “stand back and stand by” in their insignia.

NBC News reported that the Proud Boys, who were part of the Unite the Right rally in Charlottesville, VA, and have been present recently in Portland, Oregon, were celebrating, and vowing loyalty to the President.

“The Proud Boys, a far-right extremist group, pledged allegiance to President Donald Trump on Tuesday night after he told the group to “stand back and stand by” during the first presidential debate,” NBC News reported.

Meanwhile, dictionary editors — who have been quite active during the Trump presidency — quickly defined what “stand back” and “stand by” mean in the dictionary.

“’Stand back’: to take a few steps backwards ‘Stand by’: to be or to get ready to act”

But what matters here is what “get ready to act” means to the intended listeners. Make no mistake — this was a call to violence.

Aviya Kushner is The Forward’s language columnist and the author of The Grammar of God and the forthcoming Wolf Lamb Bomb. Follow her on Twitter @AviyaKushner