Timed tickets and temperature scans: The Jewish Museum reopens for the pandemic era 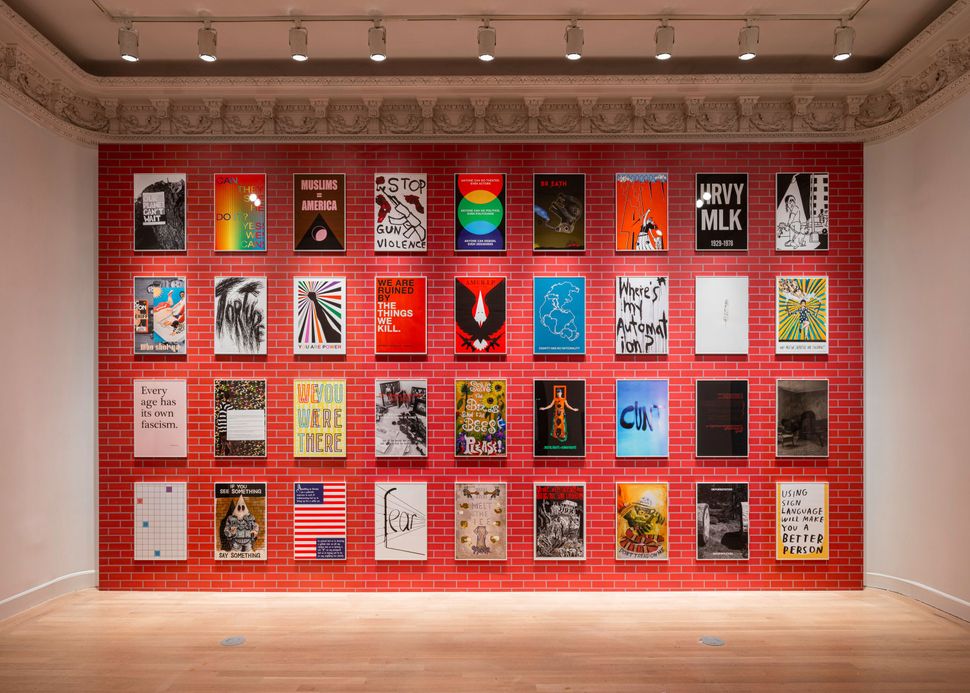 My temperature was normal, and everyone in the lobby of the Jewish Museum knew it.

On Tuesday morning, I ducked out of a light drizzle on 92nd Street and into the Jewish Museum, which reopened on September 24 after a six-month closure due to coronavirus. Gone were the hallowed museum customs of the Before Times: the long lines, the selfie sticks, the tense negotiations over who qualifies for student admission and who has to cough up full price. Instead, my visit began under the cold scrutiny of a non-contact body scanner, an artificially intelligent monitor that looked deep into my eyes and announced out loud that my internal climate raised no alarms.

A century-old cultural fixture housed in a Gilded Age mansion on New York City’s Upper East Side, the Jewish Museum grew out of a collection of Judaica owned by the Jewish Theological Seminary and has long enjoyed a reputation as an unlikely incubator of contemporary art. Now, it’s one of several museums, including the Metropolitan Museum of Art and the Museum of Jewish Heritage, that has resumed operations as part of Phase 4 of the city’s reopening plan.

That morning, the museum was still shaking off its long sleep. Admission was limited to members, and there were more staffers than guests in the lobby. In the basement, the shuttered Russ & Daughters cafe, designed to evoke the hamish appetizing counters of yesteryear, looked like an abandoned movie set. After pulling a door handle covered in “continuously cleaning” material (I sanitized my hands anyway), I found myself alone, but for a security guard, in an exhibit of sculptor Rachel Feinstein’s work.

The temperature checks were just one of many changes awaiting the vanguard of museum-goers. To ensure it operates at or below 25% capacity, the museum, like many others, is requiring timed tickets. Before arriving I’d already received and read a list of instructions warning me to wear a mask (duh), follow the one-way walking paths, and be prepared to wear (not carry!) my jacket, since the coat check was closed. 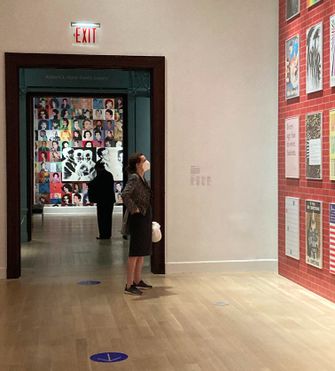 Masked visitors returned to the Jewish Museum after a six-month closure. Image by Irene Katz Connelly

If the pandemic requires prioritizing safety over spontaneity, those wandering the museum were more than willing to make the trade. My expedition was a rare foray out of my apartment and my first museum visit since a pre-pandemic outing to the Brooklyn Museum in March; the last time I’d seen an actual piece of art, I didn’t even know what an N95 mask was. But for most of my fellow visitors, the Jewish Museum was only one stop on a museum reopening tour — and a relieved return to a way of life.

“It’s great to have something on my calendar,” said Jan, a longtime museum member. “Something to wear real pants to.” As a retiree, she told me, she normally devoted much of her time to concerts, trips to the theater and museum visits. Of the three, only museums have returned.

Eileen Schuler, a member of “most museums” in New York, had already visited several others before the Jewish Museum. She found some solace in the new, more structured system: with timed tickets there was no need to wait in line or crowd in front of the most famous pieces. And for her, the chance to see an exhibition was worth the risk (however limited) of coronavirus transmission. “I’m tired of all the Zoom culture,” she said, pointing at an enormous black sculpture and informing me that it was actually made of foam. “I’m glad I’m back to live culture.”

We were standing in the museum’s newest exhibition: “We Fight to Build a Free World,” a show curated by Jonathan Horowitz and featuring artists from Bernard Perlin to Kara Walker that examines how artists have responded to social injustice. Most of the visitors had bypassed the Feinstein survey, which opened in 2019, and the museum’s stock of Judaica (menorahs, many of them) to end up here. Sometimes playful, sometimes bleak, the collection toggled between reflecting on Jewish identity and examining racism in its specifically American context.

The black foam sculpture turned out to be Horowitz’s rendering of the now-infamous equestrian monument to Confederate General Robert E. Lee in Charlottesville, Va., which the city’s officials covered with a tarp after the Unite the Right rally in 2017. Nearby was another symbol of white supremacy, a recreation of the “Arbeit Macht Frei” sign that greeted prisoners of Auschwitz. While I walked between them, a video installation broadcast the Oscar acceptance speeches for “Green Book,” a film widely criticized for its “white savior” narrative, on a constant, ironic loop.

A wacky melange that fused Warhol screen prints, the raised fist emoji, and clips from Mel Gibson’s antisemitic thriller “The Passion of Christ,” the collection was deeply interested in both the particularlities of Jewish identity and the broader political landscape in which American Jews live and participate. Several visitors said the exhibition felt especially relevant in the wake of the nationwide reckoning with racism sparked by the murder of George Floyd. Yet the exhibition, originally scheduled to open in March, was first conceived in 2017, as a response to a resurgence of anti-Semitic incidents. A spokesperson for the museum said that while the exhibit might “inform and enrich our thinking about what is happening in our society today,” it explores “issues such as anti-Semitism and systemic racism that have existed for many years.” 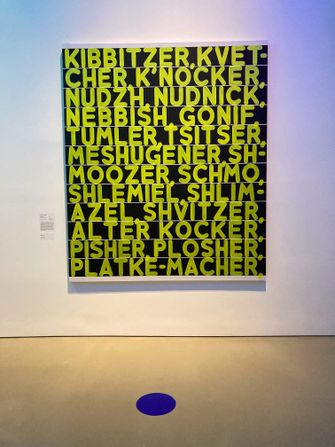 Blue dots showed Jewish Museum visitors where to stand while viewing Mel Bochner’s “The Joys of Yiddish,” on view in the museum’s permanent collection. Image by Irene Katz Connelly

Nearly everyone I spoke to at the Jewish Museum said they felt relieved that indoor activities were arriving just as the weather becomes less hospitable to outdoor ones. For them, the Jewish Museum and its peers would provide the refuge that nearby Central Park afforded over the summer. “I’m ready to adjust to whatever changes need to be made for us to become a little more normal,” Schuler said.

I wasn’t so sure. Conscious of the aerosols swirling around me and the one visitor wearing her mask under her nose (a security guard eventually reprimanded her), I found myself hurrying through the exhibit, reminding myself to appreciate the art but unable to stop in front of any piece for too long. Normally, museums afford me the singularly comforting feeling of being simultaneously alone and united with strangers. Now, I felt unsettled by the proximity of so many people outside my pod. Careful social distancing can bring us back to the buildings we miss, but as long as the absence of a coronavirus vaccine makes public life unsafe, it feels impossible to recapture the pleasure of sharing space.

When I visited the Brooklyn Museum on a Saturday night in March, coronavirus was everywhere in New York City, but I didn’t know it yet. I touched all the surfaces and spent long moments in a malfunctioning elevator with a dozen cheerful strangers. There was no need to hurry or maximize my experience: I spent fifteen minutes looking at a few Renaissance portraits and then left, certain I’d be back soon. This mid-pandemic outing felt like a funhouse version of that night, a dream in which something is not quite right. No matter how carefully museums manage their return to life, I don’t expect that feeling to subside soon.

Timed tickets and temperature scans: The Jewish Museum reopens for the pandemic era