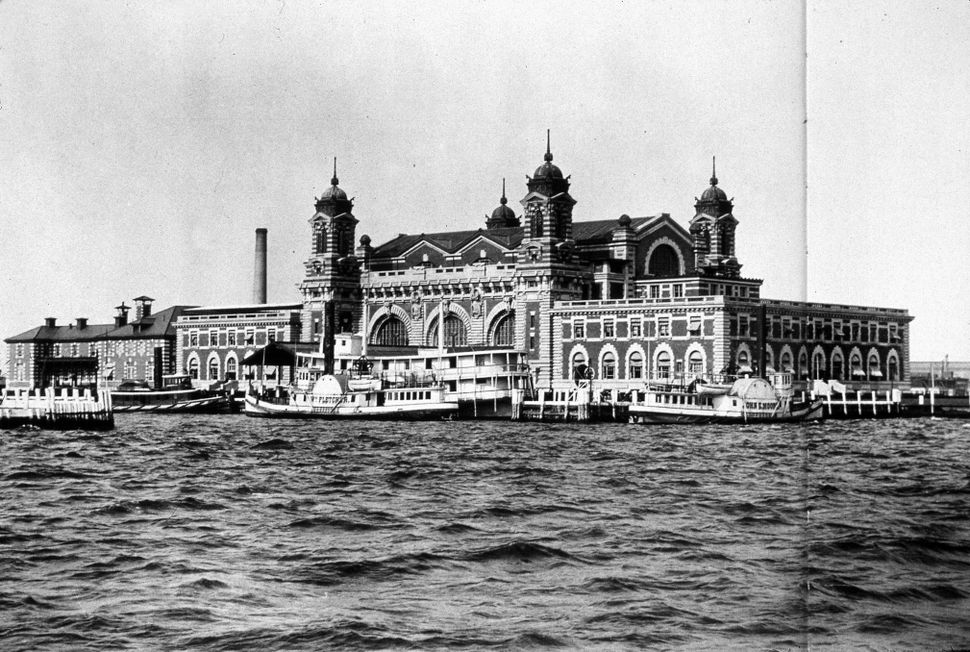 Between 1892 and 1954, Ellis Island processed 12 million newcomers. About 40 percent of today’s Americans are descended from the men, women, and children who passed through the country’s principal immigration absorption center. If the United States is a nation of immigrants, the 27.5 acres in New York Harbor are as iconic as the Liberty Bell, Wall Street and popcorn.

Henry Roth was one of 3 million Jewish immigrants processed at Ellis Island, and the opening page of his novel “Call It Sleep” itemizes the human panoply thronging its corridors during its peak year, 1907: “Hundreds and hundreds of foreigners, natives from almost every land in the world, the jowled close-cropped Teuton, the full-bearded Russian, the scraggly-whiskered Jew, and among them Slovack peasants with docile faces, smooth-cheeked and swarthy Armenians, pimply Greeks, Danes with wrinkled eyelids.”

The scene possessed personal resonance for Roth – who passed through Ellis Island from Galicia – that it lacks for Małgorzata Szejnert, one of Poland’s leading journalists. However, her curiosity was piqued during a visit to the museum that the island has become. Back home in Warsaw, unable to find any books on the subject, she determined to write one herself. The result, translated from Polish by Sean Gasper Bye, is a vibrant addition to the sizable bibliography in English.

Szejnert begins more than four centuries ago, when the Lenni Lenape Indians gathered oysters on the island. It concludes with the reinterment of Lenape remains and the prospect of oysters thriving in a revivified New York Bay. Drawing freely on letters, diaries, photographs and oral histories, most of the book recounts what Ellis Island was like for immigrants and government employees. Some of the most poignant passages draw from hundreds of letters sent back home – when Poland was absorbed into Russia – by Polish immigrants. Many enclosed ship’s passage for relatives to join them in America, but tsarist censors confiscated the letters, and they were never received.

Each arrival – except the privileged few who had traveled in first class – underwent a six-second physical inspection. Marking them with chalk, officials singled out for further examination those who aroused suspicions of disease or criminality. A large complex of hospitals was constructed to diagnose and treat a multitude of symptoms. However, during the most xenophobic years, a hint of cholera, trachoma, psychosis or radicalism led to rejection. Ellis Island sent more than 610,000 hopefuls back to where they came from. Its morgue processed 3,500 corpses.

On January 1, 1892, when the center began operations, John Weber, its commissioner, feted the first immigrant to arrive – 15-year-old Annie Moore, from Ireland. However, there were 106 other steerage passengers on the steamship Nevada, and 77 of them, as Szejnert points out, “have come from Russia – but nearly all bear Jewish names: Isak, David, Schlome (Shome), Faige, Juda, Sara, Elias, Hersch and so on.” Weber chose the Irish lass to receive a commemorative gold coin because: “Jewish groups are not viewed as suitable godparents for a new immigration station, whose opening cannot risk offending America.”

Some of the center’s 13 commissioners – including Robert Watchorn, from England, and Edward Corsi, from Italy – were themselves immigrants, and many were sympathetic to newcomers. When he took over in 1914, Frederic Clemson Howe – recognizing that Ellis Island had become “a storehouse of sob stories for the press; deportations dismembered families, unnecessary cruelties made it one of the tragic places of the world” tried to make the place more cheerful, its hundreds of employees more compassionate. Reformist commissioners cracked down on human trafficking, religious proselytizing and financial extortions. A kosher kitchen was established in 1911. But some bureaucrats valued efficiency over empathy, and some reflected the nation’s increasing hostility toward foreigners. A 1924 quota law effectively cut off immigration from Eastern and Southern Europe, and by 1932, during the Depression, three times as many people abandoned this nation of immigrants as entered it.

After World War I, Ellis Island became a deportation center, from which leftists such as Emma Goldman were forced to set sail. During World War II, when the United States accepted only 250,000 refugees from Nazism, the island became an internment camp for 6,000 Germans, Japanese, and Italians. After official operations ended in 1954, it fell into disrepair until fundraisers enabled it to reopen as a museum operated by the National Park Service. Though Szejnert’s book first appeared in 2009, its translation now is a reminder that the United States need not be defined only by a border wall.

Steven G. Kellman is the author of “Redemption: The Life of Henry Roth” (Norton) and “Nimble Tongues: Studies in Literary Translingualism” (Purdue).