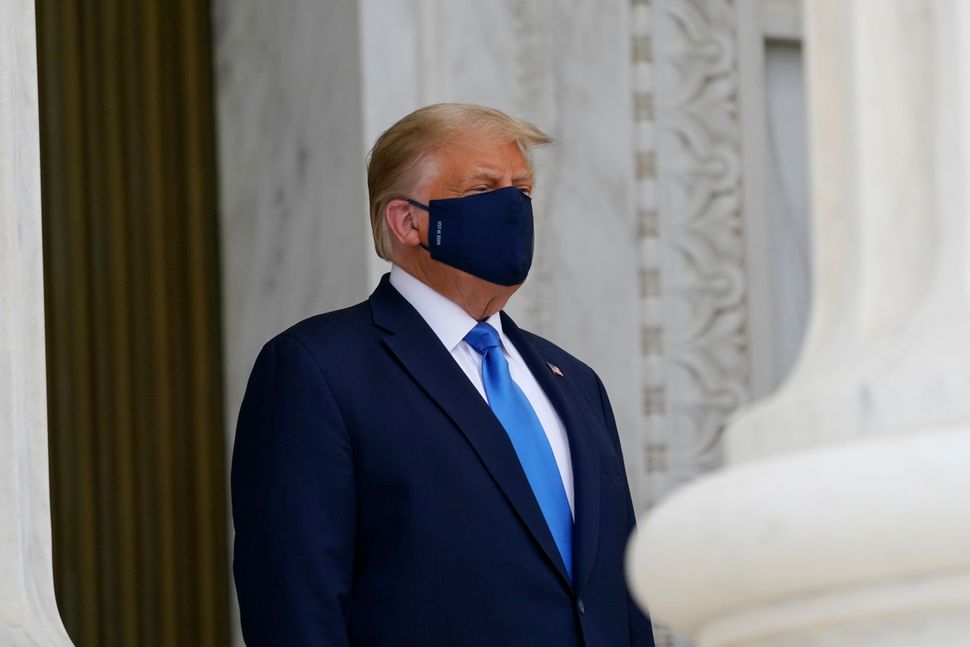 President Trump’s coronavirus diagnosis and subsequent quarantine has got me thinking about the dramatic life of Uzziah, King of Judah, who contracted tsara’at — traditionally translated as leprosy, and who is described in II Chronicles as making a power grab that led to contracting a contagious disease that required quarantine.

Uzziah’s reign, from c. 791–739 BCE, is recounted in II Chronicles and is also recorded in the Book of Isaiah. In II Kings, Uzziah is referred to as “Azariah the son of Amaziah.”

Uzziah, the son of Amaziah, was 16 years old when he succeeded his father as king, and reigned for 52 years, according to Chronicles II Chapter 26. The same chapter details Uzziah’s accomplishments in glowing terms — and then comments that his arrogance led to corrupt behavior and leprosy.

“He made clever devices in Jerusalem, set on the towers and the corners, for shooting arrows and large stones. His fame spread far, for he was helped wonderfully, and he became strong,” Chronicles II 26:15 reads in the 1985 Jewish Publication Society translation.

But the next verse is fascinating, and a form of political commentary.

“When he was strong, he grew so arrogant that he acted corruptly; he trespassed against his God by entering the Temple of the Lord to offer incense on the incense altar.”

What this means is an overreach on the boundaries of power. Uzziah — whose name means “my strength is God” — was not content with the power of a king; he also wanted the power of a kohen, a priest. And so the next verse, 17, details the dissent of the kohanim, who defend their terrain:

“It is not for you, Uzziah, to offer incense to the Lord, but for the Aaronite priests, who have been consecrated, to offer incense. Get out of the Sanctuary, for you have trespassed; there will be no glory in it for you from the Lord God,” the 1985 JPS reads.

The Hebrew has lo lecha – “it’s not for you” – twice in that verse. And as if that were not dramatic enough, we read about an instantaneous outbreak of leprosy.

“Uzziah, holding the censer and ready to burn incense, got angry; but as he got angry with the priests, leprosy broke out on his forehead in front of the priests in the House of the Lord beside the incense altar,” the 1985 Jewish Publication Society translation recounts.

Then the kohanim act fast to separate themselves, as leprosy was a highly contagious disease.

“When the chief priest Azariah and all the other priests looked at him, his forehead was leprous, so they rushed him out of there,” verse 20 reads. “He too made haste to get out, for the Lord had struck him with a plague.”

In the monumental Robert Alter translation of the entire Tanach, published in 2019, the end of that verse reads “for the Lord had infected him.”

Notably, Alter does not use the word “plague” here.

Then as now, the main containment strategy for a highly contagious disease was quarantine. But for Uzziah, the experience was far longer than 14 days. It lasted for the rest of his life.

“King Uzziah was a leper until the day of his death. He lived in isolated quarters as a leper, for he was cut off from the House of the Lord,” verse 21 reads in the 1985 Jewish Publication Society translation.

And worst of all, was where Uzziah had to sleep: “Uzziah slept with his fathers in the burial field of the kings, because, they said, he was a leper.”

But the last part of that verse makes it clear that while Uzziah himself was out, his family stayed in power; “his son Jotham succeeded him as king.”

From a translation perspective, Alter’s notes on this section are really intriguing, because he does not translate Uzziah’s affliction as leprosy; instead, Alter translates tsara’at here as “skin blanch.” Alter explains that he reached that conclusion by closely reading about the king’s symptoms, and comparing the way this story is told to how it is related in II Kings.

“The disease, tsara’at, is traditionally rendered as “leprosy,” but the symptoms do not correspond to leprosy — the chief symptom is a loss of pigmentation — hence the coined name in this translation,” Altar writes in his commentary on Chronicles II 26:19. “In any case, it was thought to be highly contagious, necessitating quarantine. In Kings, no mention is made of the violation of the cult as the reason for the affliction.”

Here, a reader who might prefer reading Biblical translations to op-eds on the President’s coronavirus diagnosis might do a bit of digging. In II Kings, the same episode with Uzziah, also known as Azariah, is recounted, but the story is detailed a bit differently.

“And he did what was right in the eyes of the Lord as all that Amaziah his father had done,” II Kings Chapter 15:3 details in the Alter translation. “And the high places were not removed—the people were still sacrificing and burning incense on the high places. And the Lord infected the king and he was stricken with skin blanch till his dying day, and he dwelled in the quarantine house, and Jotham the king’s son was appointed over the palace, judging the people of the land.”

What is notable about the II Kings rendition is that corruption and a power grab are left out. As Alter comments in his note on “skin blanch,” this passage simply reflects the Biblical assumption that everything is caused by God:

“No reason is given for this terrible affliction: Azariah is said to have done what was right in the eyes of the Lord, apart from allowing worship on the high places to continue, as all his predecessors had done,” Alter writes in his commentary here. “One may conclude that we have here the report of a historical datum—that Azariah suffered from a disfiguring skin disease, presumed to be contagious, all his life. The fact that God is said to have done the afflicting simply reflects the general assumption of this and other biblical writers that all things are caused by God.”

For those of us who are feeling extremely constrained and perhaps, “unfree,” because of the requirements of social distancing and quarantine, it’s worth considering the intriguing Hebrew phrase used in this verse for a quarantine location— beit hachofshit. In Hebrew, chofesh is “freedom” so this initially looks like a “free house.”

Alter’s note on this verse, and his decision to translate beit hachofshit as “quarantine house,” is fascinating reading:

“The Hebrew name of this place appears to reflect a term that means “free”. It is a “free house” either because the condition of freedom is associated, as in one Ugaritic text, with death (here, a living death), or because someone in such a place is free of all civic obligations.”

What are the “civic obligations” of a world leader in a quarantine house, or a free house, depending on your translation? We are all about to find out.

Aviya Kushner is The Forward’s language columnist and the author of “The Grammar of God” (Spiegel & Grau) and the forthcoming Wolf Lamb Bomb (Orison Books). Follow her on Twitter @AviyaKushner