A Jewish poet of survival, Louise Glück is an incredibly timely Nobel choice 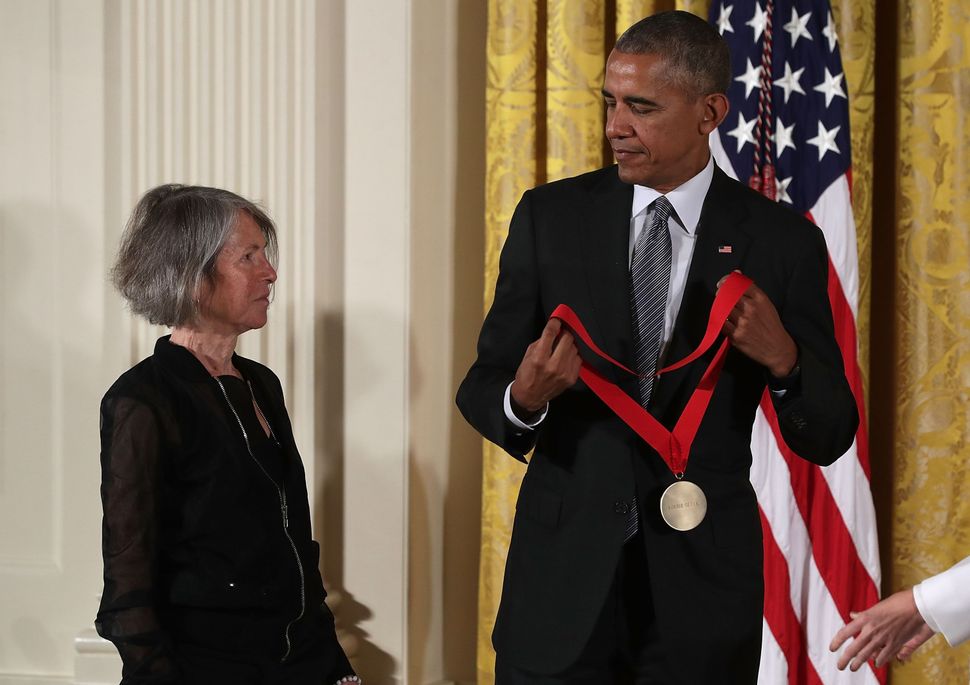 The poet Louise Glück, who just won the Nobel Prize in Literature, has been very apprehensive about using the word “poet” – especially in relation to herself. In her lone collection of essays, “Proofs and Theories,” she describes her vocation in “Education of a Poet” — originally a 1989 lecture at the Guggenheim Museum — by repeatedly using the word “writer” instead of “poet.”

“I use the word “writer” deliberately,” Glück writes. “’Poet’” must be used cautiously; it names an aspiration, not an occupation. In other words: not a noun for a passport.”

That phrase — “not a noun for a passport” — has always struck me as a very Jewish way of understanding the world. It hints at internalizing the possible need to flee and imagines that a person might need to come up with a legitimate reason why she deserves to survive.

But all of Glück’s work, both the poetry and the prose, addresses survival.

It’s this engagement with the question of how to survive — and the searing honesty of admitting it is a problem we all face — that often makes Glück readers extremely passionate in their admiration. In the late 90’s, for instance, a Cambridge bookstore had a huge sign in the window with the words of Louise Glück’s famous poem “The Wild Iris” taking up the entire display case.

That poem begins with these unforgettable lines:

At the end of my suffering

there was a door.

That was the title poem of “The Wild Iris,” a collection that won the Pulitzer Prize in 1993; the collection addresses the pain of depression and the recovery from it, and the poems are written in the voices of flowers. Each Glück collection is its own world; each has been structured in a unique shape, with a clarity and purpose to its order.

“Vita Nova,” or “New Life,” published in 2001, takes on the tradition of Virgil and Dante, and the challenges of following a master, but also directly addresses survival once again. Its first line reads:

“You saved me, you should remember me.”

But Glück also had a very particular poetic challenge in each book — something she faced down herself as she wrote. As she writes in “Education of a Poet”:

“Each book I’ve written has culminated in a conscious diagnostic act, a swearing off. After ‘Firstborn,’ the task was to make latinate suspended sentences, and to figure out a way to end a poem without sealing it shut.”

For other books, she tells us, “I wanted to learn a longer breath. And to write without the nouns central to that second book; I had done about as much as I could with moon and pond. What I wanted, after ‘Descending Figure,’ was a poem less perfect, less stately; I wanted a present tense that referred to something more fluent than the archetypal present.”

In some ways, Glück had an archetypal American Jewish upbringing — or at least one familiar to those who read biographies of Jewish writers who grew up around the same time. Glück’s paternal grandparents, Hungarian Jews, emigrated to the United States, and owned a grocery store in New York. That sounds a bit like Bernard Malamud’s story, one generation removed — Malamud’s father was a grocer, and that greatly affected his fiction.

Glück describes, in “Education of a Poet” how she was raised to “recognize and honor and aspire to glorious achievement” — which struck me as a Jewish educational philosophy.

Many poets have personal stories of Glück’s kindness and devotion to poets; I have my own. Glück has been an important friend to poets, and has long been close to Robert Pinsky, a major Jewish American poet. A longtime teacher of poetry, Glück herself was famously mentored by the Jewish American poet Stanley Kunitz, and has written movingly about how Kunitz guided her, and most importantly, told her the truth about her work.

For new readers and longtime readers, one of the great pleasures of Glück’s work is following her progression as a poet and seeing her continue to create new challenges for herself, decades into a major career, and then conquer them completely. At this moment in time when all of us are thinking about survival, Glück’s body of work seems especially essential — and her selection as Nobel Laureate is a ray of truth.

Aviya Kushner is The Forward’s language columnist and the author of The Grammar of God (Spiegel & Grau) and the forthcoming poetry collection Wolf Lamb Bomb (Orison Books, April 2021). Follow her on Twitter @Aviya Kushner

A Jewish poet of survival, Louise Glück is an incredibly timely Nobel choice