How the Forward, with humor and vehemence, taught its readers to vote 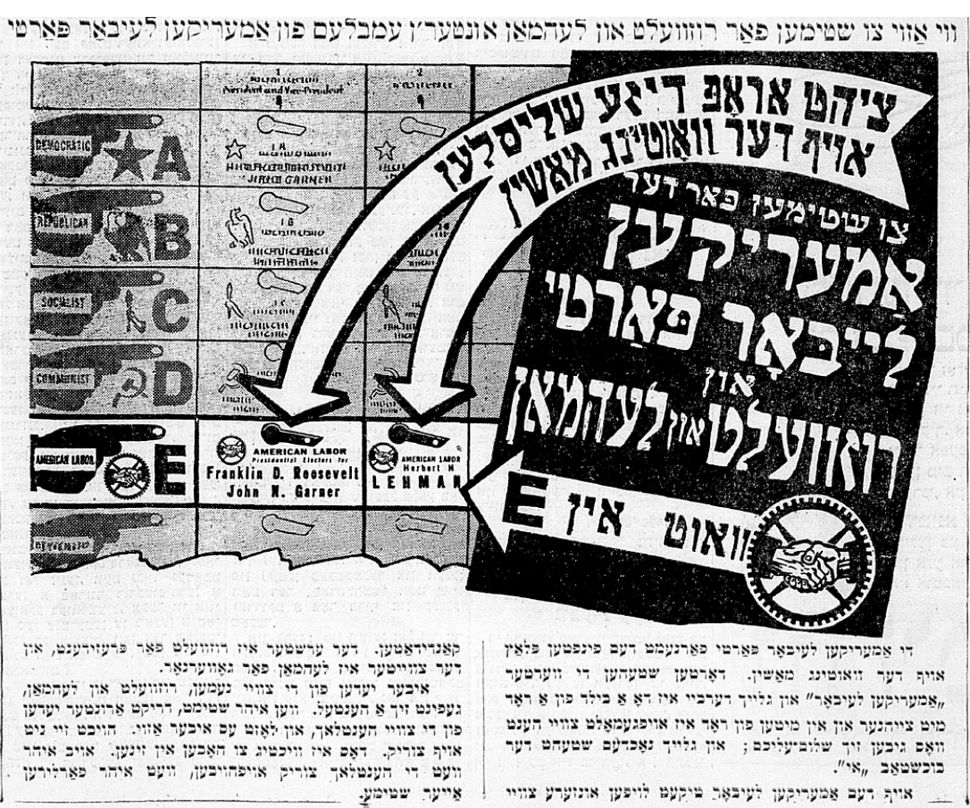 A 1936 illustration showing readers how to vote for President Franklin Delano Roosevelt under the American Labor Party. Image by Forward Archive

This is the third installment of a special series exploring The Forward’s election coverage throughout its 123-year history. Click here to sign up to receive it through our email newsletter, and find our earlier installments here.

Look: Voting’s complicated. There are different deadlines to register depending on where you live, mixed messages about identification requirements and active efforts at voter suppression. Figuring out where and how to vote can be a complicated process.

Even without a global pandemic.

Our predecessors who edited the Forward a century ago had little patience for readers who were befuddled by this most fundamental act of democratic citizenship. We were enthralled by a cartoon we found from 1926, a midterm election in the middle of President Calvin Coolidge’s second term. It was part of “Shirley and Her Folks,” a recurring English-language strip in the then-Yiddish daily broadsheet drawn by the Forverts’ pioneering cartoonist and illustrator Samuel Zagat.

A strip of “Shirley and Her Folks” by Samuel Zagat. Image by Forward Archive

Pop, an older man, hangs a picture of his preferred candidate in his house, only to be told by his wife that he can’t vote — because he forgot to register.

It’s a funny strip, playing off the trope of the hen-pecked husband, a longtime staple of comics. But beneath its frivolous aesthetics, the interaction has an acid tone. Pop hasn’t come home late for dinner, forgotten an anniversary because of a ball game or failed miserably while attempting a basic household chore. Instead, he’s committed a cardinal sin: letting the most readily available tool of democracy fall clean out of his hands.

“Bang! Goes Pop’s Vote,” was emblematic of the Forward’s visual approach to the democratic process: It was brash, imaginative, idiosyncratic and often fun. The editors back then seemed to rely on visuals as a fundamental element of their campaign to get readers to exercise their franchise. Sure, they also wrote impassioned editorials and reports on voter intimidation, but those might slide by bored or exhausted eyes. Comics, advertisements and boldly-opinionated illustrations demanded attention.

Some of these visual plays were more forceful than others. Where Pop’s failure to register almost reads like a joke, the sort of message that might implant itself in a mind and reap dividends over time, insets like the one below delivered an explicit, insistent message. It was published on the morning of the 1936 presidential election, in which President Franklin Delano Roosevelt’s reelection bid was challenged by the Kansas Republican Alf Landon.

The illustration told voters both how to vote, and for whom. The instructions were painstaking, going so far as to remind voters that when they pulled the levers down for their candidates — in Yiddish, the hentelekh, or “little hands” — they had to resist the impulse to raise them up again, or they would lose their vote. 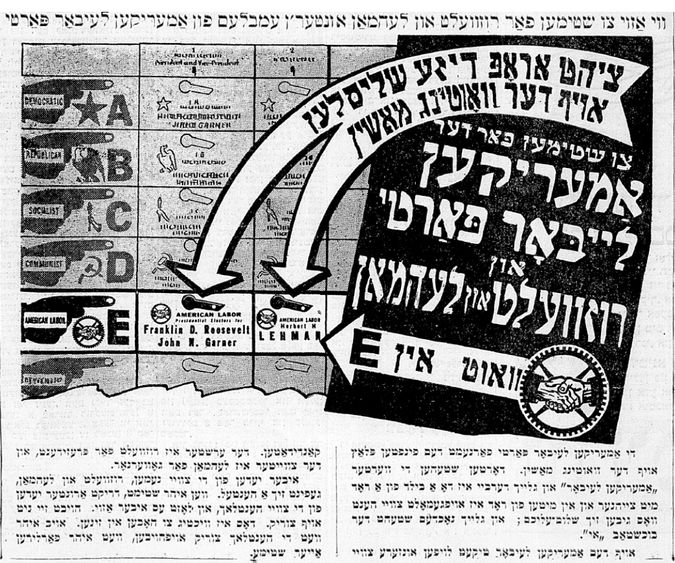 A 1936 illustration showing readers how to vote for President Franklin Delano Roosevelt under the American Labor Party. Image by Forward Archive

The headline of the illustration was “How to Vote For Roosevelt and Lehman Under the American Labor Party Emblems.” Well past the era of its support for perpetual third-party Socialist candidate Eugene V. Debs, the Forward had begun to concede its endorsement to the mainstream liberal candidate — but still insisted that votes for that candidate ought to be made under the auspices of a more socialist-minded party.

That stance was a particularly significant choice in a year that saw the establishment of the short-lived bipartisan Union Party, which, with its radical pro-labor position, situated itself between the Democrats and Communists — middle ground that was also occupied by the Forward’s editorial board. But the Union Party was fragile and uninspiring; its nominee, William Lemke, eventually earned less than 2% of the vote. So the message to readers from a paper that had been perpetually anti-establishment was clear: You must make your vote count — vote for a leader who can actually lead — but make sure you do so in a way that upholds your principles, by voting the Labor line.

To make the point crystal clear, the illustration made it impossible to decipher the names of any candidate or party other than “Roosevelt” and “American Labor.” 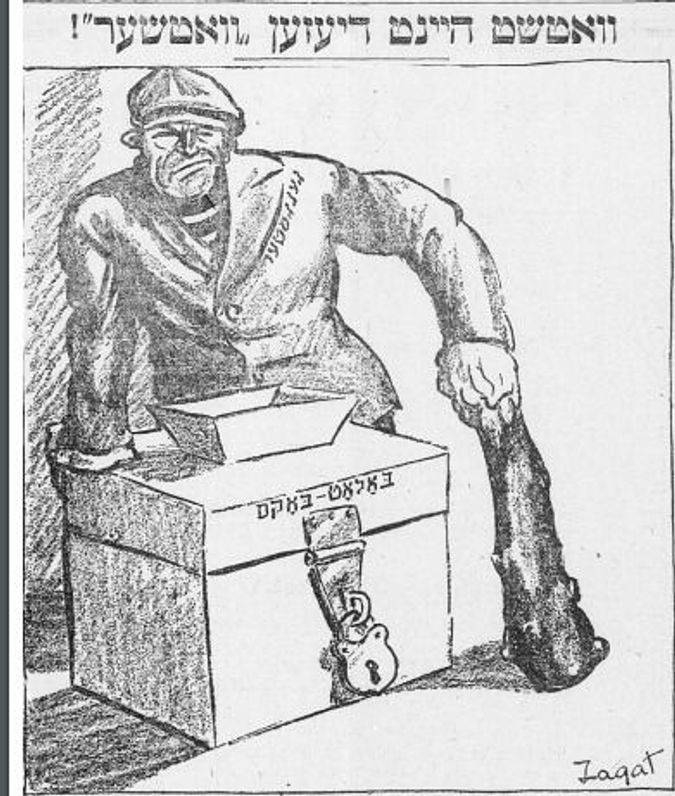 We found other voting-related visuals that were frankly alarmist. Educating readers about voter intimidation, a subject we covered in our last installment, the paper in 1920 printed a menacing cartoon of a gangster guarding a ballot box, one hand on the lid, the other leaning on an enormous club. “Watch the ‘watcher,’” the caption exhorted. (It was also drawn by Zagat, showcasing his range in style and tone.)

As we wrote last week, voter intimidation was a major issue. But it was never quite that major. The gangsters keeping their eye on the proceedings were not larger than life, nor did they carry weapons that would look more at home in the hands of trolls.

The exaggeration was risky, but savvy. The illustration itself could have proven more intimidating than any real-life thugs at the polls. But it was also alluring, because contained within the caption was the message that Forward readers — ordinary civilians — had the power to stand up to the gangsters.

That must have been an especially resonant message for a readership that had profound roots in the experience of being an oppressed minority in the old country. You can imagine that readers who knew what it meant to be brutalized would have been thrilled to be told that this time, you not only could fight back, but should.

How the Forward, with humor and vehemence, taught its readers to vote