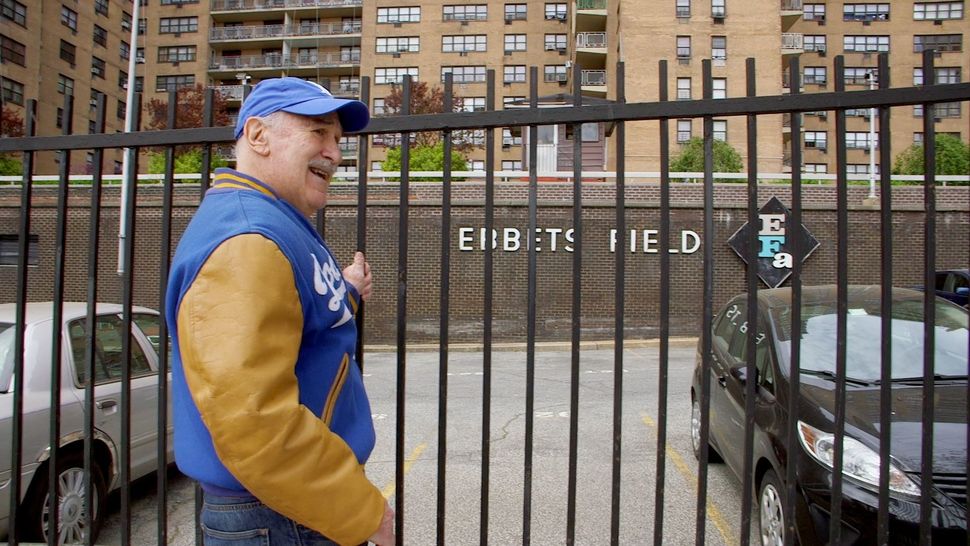 Ira Glasser Image by Foundation for Individual Rights in Education

Freedom of speech is mined territory. Does the first amendment extend to inciting violence? And how do you define “incitement” Just ask 82-year-old Ira Glasser who served as the executive director of the American Civil Liberties Union for 23 years (1978-2001) and is best known for his involvement with the controversial Skokie case.

In 1977, the ACLU defended the rights of neo-Nazis to march in the Chicago suburb’s heavily Jewish community. Most of the ACLU lawyers involved in the case were themselves Jews. Glasser’s mantra was and is: you don’t stop hateful acts by censoring speech. You do so with more speech.

In their affectionate documentary, “Mighty Ira,” directors Nico Perrino, Aaron Reese and Chris Maltby explore the fraught topic of free speech and free assembly through the eyes of one iconic trailblazer who is paradoxically miscast. Devoid of sanctimony—indeed, he’s genial and compassionate — Glasser recounts his life’s journey, never forgetting where he came from: He’s the son of working class Jewish immigrants who lived in Flatbush where the Brooklyn Dodgers were Kings.

When Jackie Robinson broke through baseball’s color barrier in 1947 to become the first Black player in the Major Leagues, it was a life-altering moment for Glasser who still attributes his hatred of Jim Crow and passion for Civil Rights to rooting for Robinson and the Dodgers. He says his whole life might have turned out different had he been a Yankee fan. 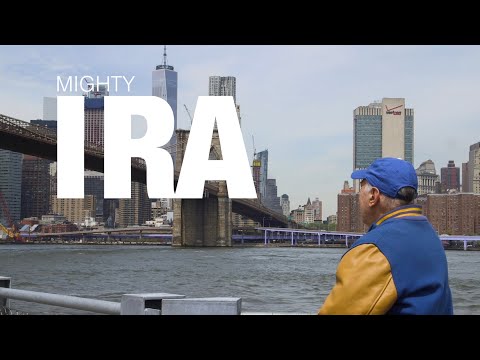 Even today, the Dodgers’ move to Los Angeles and later the destruction of their home in Ebbets Field resonates for Glasser. He tears up looking at an old still of the broken-down stadium shortly before it was completely demolished.

Cross-cutting interviews with old photos and archival footage, the film evokes a comparatively benign pre-Internet world, though of course there was never anything benign about Nazis. Still, the issues were simpler, at least they appeared so, and the players on both sides of the aisle appeared to be more reasonable and even-tempered.

Among those featured: Bryan Stevenson of the Equal Justice Initiative, Michael Meyers of the New York Civil Rights Coalition along with Normal Siegel, Nadine Strossen and David Goldberger, all three of whom were affiliated at one time or another with the ACLU. 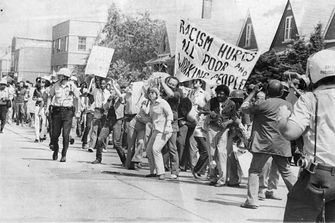 Glasser began his career as a math teacher before he took a job as an editor of the public affairs monthly, Currents. But he grew disaffected, wanting to be an activist not a political reporter on the sidelines. He wrote to then-Senator Robert F. Kennedy, and to his astonishment Kennedy met with him. At Kennedy’s urging, Glasser joined the ACLU, though he was neither a lawyer nor a fund-raiser. Yet, by the time he retired in 2001 he was recognized for transforming the organization “from a ‘mom and pop’-style operation to a civil-liberties powerhouse.” During his tenure, the ACLU also rolled up a $30 million endowment.

From the outset, Glasser appreciated how the organization viewed freedom of speech as an essential element in achieving racial equality and that without the first amendment, the anti-war and women’s demonstrations might also be quashed. For him it didn’t seem too much of a leap to accept the idea that those same rights had to be extended to Nazis too, even when they decided to parade through Skokie, home to an estimated 7,000 Holocaust survivors.

Make no mistake: Glasser viewed the Nazis as repellent and a hideous provocation. He became close friends to one of Skokie’s residents, Ben Stern, a 96-year-old Auschwitz survivor who rolled up his sleeve to display the tattooed number on his arm. The image continues to pack an emotional wallop despite the many decades that have passed.

The film does not make short shrift of Stern’s feelings. It includes clips of emaciated concentration camp inmates pressed up against barbed wire. Their familiarity does not dull their impact. It’s easy to imagine the feelings that Nazis stomping through Skokie would arouse in Stern and his neighbors. Glasser understands Stern’s dismay, yet argues that what happened in Germany didn’t happen because there was a First Amendment, but rather because there wasn’t.

Winning that Skokie case was no easy feat. The municipality filed an injunction against the neo-Nazi leader, Frank Collins, and his 15 or so followers, and an ordinance prohibiting them from marching was in fact passed. And that’s when the ACLU stepped into the act knowing full well it might alienate many of its members and financial supporters. The ensuing heated conversation morphed into a national debate. Glasser addressed synagogue groups and appeared on television to defend his position. In the end, the ACLU won its landmark case—it went all the way to the Supreme Court—and lost a percentage of its membership along with a hunk of its fiscal underwriting.

In the interim, Skokie pulled together a sizable counter-demonstration led by militant Rabbi Meir Kahane. But in the end Collins and his followers backed out. To what degree they felt vanquished ahead of time is debatable. Later we’re told that Collins was half Jewish (which he denied), and some years thereafter, a convicted child molester. Today he fancies himself a New Ager. The film subtly captures the contradictions, the dark absurdity.

“Mighty Ira” also has moments of charm. The street smart Glasser frequently appeared on “Firing Line” opposite the patrician and erudite William F. Buckley. The two men couldn’t have been more far flung, yet managed to bridge their social/cultural/stylistic gaps to form an improbable friendship. Their clear ideological differences notwithstanding, they just plain liked each other. In one delightful snippet, Glasser is seen shepherding Buckley through the New York City subways to attend a Mets’ game on Opening Day.

Apparently, it was Buckley’s first baseball game and also the first time he had ever been in the subway. As the filmmakers bring the subject of free speech-free assembly into the present, they draw an arc from the events in Skokie to the white supremacists marching in Charlottesville in 2017. Glasser remains consistent, maintaining that neo-Nazis had every right to demonstrate, despite the death of Heather Heyer. She was not killed by gun toting anti-Semites, Glasser points out, but rather by an enraged driver plowing through the crowd. The whole tragedy could have been avoided were it not for police incompetence.

Elsewhere, Glasser has said that today’s ACLU would not defend the right of racists to speak and demonstrate and that the organization has replaced philosophical principles with political ideologies. One wishes that the documentarians had delved more fully into this subject; the narrative cries out for Glasser’s views on the politicization of the ACLU and, more pointedly, the impact of “wokeism” on free speech. Another shortcoming here is the film’s intrusive score which dictates how viewers should feel.

That said the film is an engaging and informative backwards glance. It’s an evocative portrait of a time, place, and a most unexpected ground-breaker.

“Mighty Ira” is now accessible on Angelika Film Center’s virtual cinema and will be available on streaming platforms later in October.