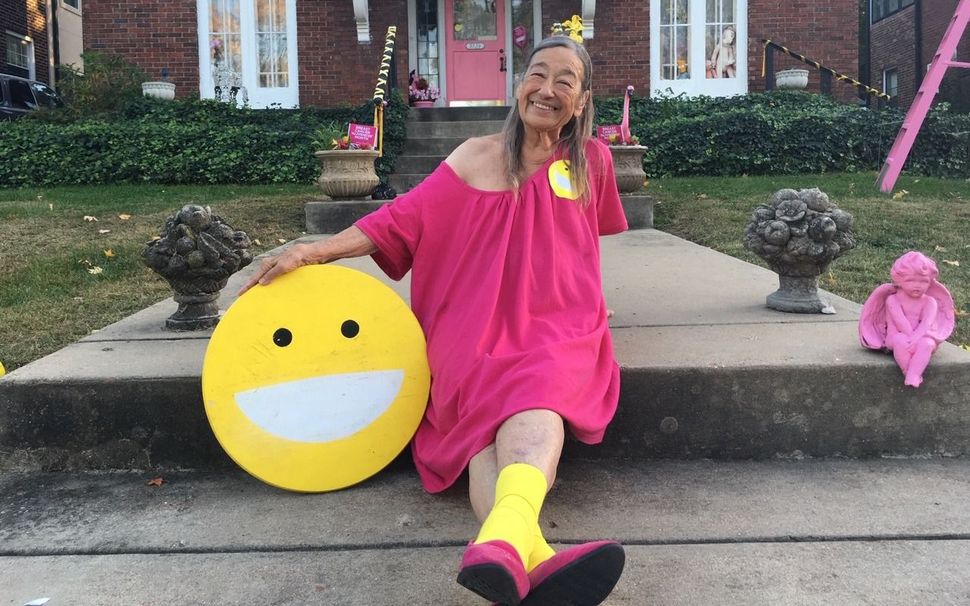 Ruth’s Pen Pal: At 85, Lois Severin is still a hippie, known for her wacky collections and her VW Beetles. Image by Beth Saidel

Ruth Bader Ginsburg and Lois Severin never spoke on the phone. They were only together a handful of times. But their 17-year correspondence fills a box in my Aunt Lois’ St. Louis home.

It started in the early 1950s. Marty Ginsburg and Lois’ husband, my Uncle Phil, met at Cornell University. They were fraternity brothers. Ruth and Marty planned to marry, but he was off to Harvard Law and she was finishing her senior year at Cornell. So, Phil, ever the chauffeur (he regularly schlepped his childhood friend Joan Rivers from Larchmont, New York to her gigs in Greenwich Village), drove Ruth in his dull blue, four-door, least-desirable-car-ever to visit her intended. Lois once asked Phil what they talked about during those long, long road trips from Ithaca to Cambridge. “Nothing,” he said. “Ruth didn’t talk. She studied.”

When Phil died in 2003, the correspondence took off with a note of condolence from the Ginsburgs: “We remember him, from days when we were very young, as an all-around good fellow… very much the same when we met at Washington U. in St. Louis not so long ago. May you carry on in life and health just as Phil would have willed.”

Lois has carried on. She’s 85, still a hippie, known for her wacky collections and everything pink, and wildly in love with life and Leonard Cohen. She plays tambourine for a rock band, once sort of ran for president, and is, in many ways, a local celebrity. She drove VW Beetles and gave me my first Cat Stevens album. And she has always thrown caution to the wind and the best theme parties in town. 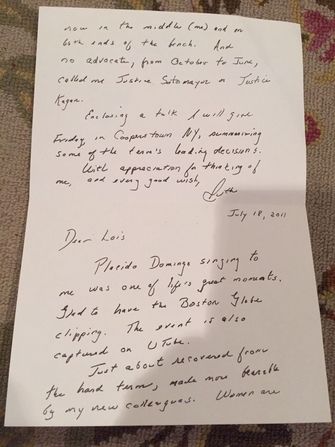 Thrill of a Lifetime: RBG recalled the time Placido Domingo sang to her. Image by Beth Saidel

She and Ruth continued to touch base regularly. Ruth always sent handwritten cards for the Jewish holidays, shedding light on Hanukkah and inscribing Lois in the book of life for Rosh Hashanah. After Marty Ginsburg died in July 2010, Ruth’s annual December card to Lois went like this: “It is powerfully hard to adjust to life without Marty. But people like you set a good example for me.” In a subsequent letter she noted, “I was in Court the day after Marty’s death because that is what he would have wanted. My children agreed.”

So, there they were. Two small, larger than life, widowed, Jewish bubbes (the grandchildren of both women referred to them as such), sharing pride in their offspring and hopes for the future.

Ruth often sent large envelopes. Inside there was always a note, either handwritten or hand-signed on court stationery. And with it, inserts of all sorts. She would send speeches (“Enclosed, remarks I made at Touro Synagogue”), papers and interviews, opera and theater programs (“I have seen several Kander & Ebb shows at the Signature Theater”), magazines pieces in which she was featured, and every manner of publication, from “The Supreme Court Historical Society Quarterly” to the “ACLU Women’s Rights Project Annual Report.” It was a sweet sort of bragging, and Lois of St. Louis was the perfect audience. 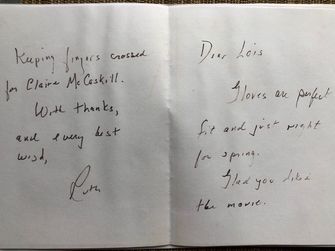 Mensch on the Bench: A note from RBG to Lois Severin. Image by Beth Saidel

Ruth also shared passions — how Sonia Delaunay was one of her favorite painters and that Placido Domingo singing to her was one of life’s great moments. She even remarked about life on the Court. “The challenging term ended today,” (June 2005). “Just about recovered from the hard term, made more bearable by my new colleagues. Women are now in the middle (me) and on both ends of the bench. And no advocate, from October to June, called me Justice Sotomayor or Justice Kagan,” (July 2011). Now and then, she got political: “Keeping fingers crossed for Claire McCaskill.” “Hoping we will smile after the Election!” “Just back from restorative adventures in Barcelona and Venice. All I encountered abroad are frightened for the USA. They see a marked resemblance between Trump and Il Duce. Love to you, Ruth,” (August 2019).

And in the last few years, Ruth hinted more often at age and health. She reported that radiation was over, and she was on her way back to feeling good. She noted that time speeds up as one ages. She suggested that they should “stay strong and be resilient.”

So, what did Lois send to Ruth? There were notes and clippings, but there were also things that only Lois could send. Like her famous, big yellow smile stickers from her campaign to bring a million smiles to the world. And her foil-wrapped chocolates hearts and Hanukkah gelt. Nine of everything for Ruth to share with her colleagues on the bench. 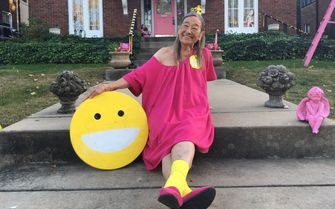 Ruth’s Pen Pal: At 85, Lois Severin is still a hippie, known for her wacky collections and her VW Beetles. Image by Beth Saidel

And then there were the gloves. Over the years, Lois sent Ruth a dozen or more pairs. Crocheted, lacy, lavender, white. They weren’t from Bergdorf’s, unless they were originally from Bergdorf’s. Lois acquired most everything she owned at neighborhood garage sales, and most everything for under a dollar or two. The gloves she sent to Ruth were no exception — 1950s, clean and pressed. According to Lois, “Some had diamonds on them, some had pearls, lots of them had flowers. I sent her a pair with a little plaid cuff. They were wonderful. I didn’t know how to get rid of them, so now I had a home for my stuff.” Ruth always wrote back in short order. They are “perfect for spring,” and they will “be worn (and enjoyed) regularly.”

For her 80th birthday in 2015, Lois had a plan. She distributed 1,600 two-dollar bills to relatives and friends. The only instruction was to share them in any way whatsoever. She sent nine crisp bills to Ruth who replied: “Thank you for the Lois Lane birthday gift. The idea is grand, and I will carefully choose the recipients of my 8.”

This past December, Lois threw her usual Hanukkah fete with her usual Xeroxed invite promising candle lighting, too much food, and a motley assortment of friends. Ruth RSVP’d via email: “Yours is an invitation I wish I could accept.”

Justice Ginsburg was precise on the bench and precise in other ways that often belied her warmth. But Ruth had a soft spot for humor that Lois tapped into over the years. Maybe not at first, but Ruth came to banter back with a relaxed spirit and occasional irreverence. Perhaps there was something in the air on that U.S. mail route from D.C. to Missouri that made it a great equalizer, blissfully free from legalese and the formality that goes with it. 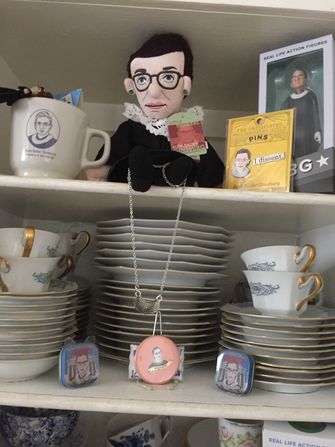 There’s a small, empty envelope in the box on which this is written: “To Lois, with love, Ruth.” Lois can’t recall what was inside, but it was probably something nice. And then there is the last letter Lois received, on August 11, 2020, just a month before Ruth’s death: “The gloves from your collection are simply elegant. They fit perfectly. Thanks for a gift so special and caring.”

Ruth Bader Ginsburg was an icon and a game changer. Ruth was a woman with real heart. I will picture her donning those lovely Lois Severin hand-me-down gloves, one wise and delicate finger at a time.