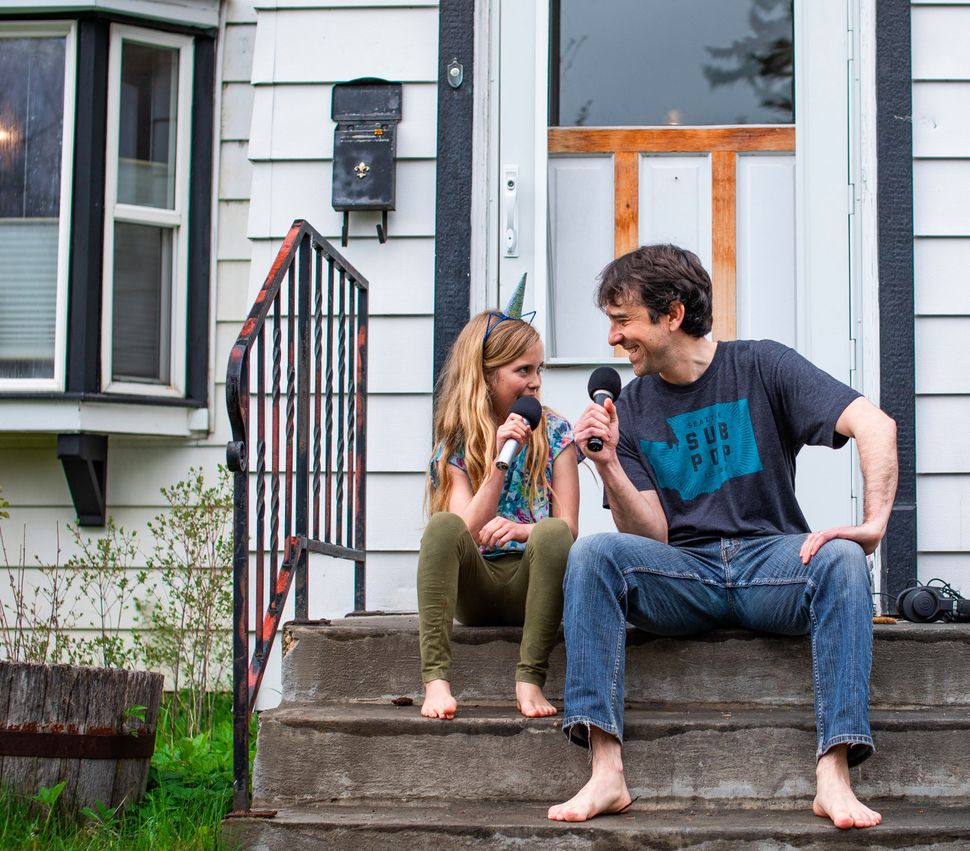 Jeremy and Rasa Smith outside their Missoula, Mont. home. Image by Courtesy of Jeremy Smith

10-year-old Rasa Smith used to feel jealous when she heard kids on the radio.

“I’ll never be on a podcast,” she recalled thinking while listening to a program hosted by a fellow pre-teen.

But on that front, she’s proven herself very wrong.

When the pandemic shut down schools in her hometown of Missoula, Mont., Rasa, an only child, found herself spending a lot of time with one person: her dad, journalist Jeremy Smith, who found himself suddenly responsible for his daughter’s education and their mutual safety (Rasa’s mother, Crissie McMullan, is the director of a Missoula women’s shelter and has worked from her office throughout the pandemic).

Instead of succumbing to the American panic-baking craze, the father-daughter duo launched a pandemic-era podcast: “You Must Know Everything,” a bite-sized but wide-ranging show that answers questions about recycling and women’s suffrage, analyzes the work of Emily Dickinson, and explains once and and for all how to “make anything pretty.” Now in its 56th episode and airing on Montana Public radio, the podcast is a budding fan favorite with big goals: The father-daughter duo say they won’t stop until they literally know everything.

“It’s a really special thing,” Rasa said, speaking to the Forward by phone with her dad (and cat) in tow. “Even when the pandemic ends, I’d like to keep doing it.”

“You Must Know Everything” has been a long time in the making. It was inspired by a list Jeremy started when Rasa was a baby, of the important life lessons he planned to impart — eventually. When the pandemic hit, he realized two things. First, Rasa was finally old enough to receive the knowledge he had to share. And second, she had plenty to teach him.

Rasa couldn’t agree more. “There’s so many things he doesn’t understand about being a kid,” she said.

The two decided to share their respective wisdom in the form of a podcast. The name they chose is an ironic tribute to the Isaac Babel short story “At Grandmother’s,” in which an overbearing matriarch nags her grandson into studying by constantly repeating that he “must know everything.”

Each of the podcast’s 10-minute episodes follows a similar format. In the first segment, either Rasa or Jeremy shares something the other needs to know, whether it’s a big-picture life lesson or a small-scale life hack. Next, they read and discuss a poem. Finally, they take turns stumping each other with “vexing questions,” queries that take a little research to resolve.

A typical episode might feature a journey through Avril Lavigne’s classic ballad “Sk8r Boi,” which Jeremy contends is not just a vehicle for teen angst but a triumph of narrative storytelling. There might be a crash course in sewing or slime-making from Rasa, an avid crafter (she just acquired a glue gun, and has big plans for Halloween).

Listeners can expect to learn the answers to questions big and small: How does recycling work? What’s the point of having eyebrows? Does Netflix make a profit? (The answer, which surprised both Rasa and me: No.)

Rasa said she’s enjoying researching topics she might never encounter at school. “I don’t know about anyone else, but here they don’t teach you about whether Netflix is in debt or not,” she said.

There’s certainly plenty of disagreement on the set of “You Must Know Everything.” In one episode, for example, Rasa extolled the joys of fort-building. But Jeremy finds her creations, which swallow up sheets and couch cushions, aggravating — he usually is the one who has to clean them up.

By the end of the episode, they arrived at a solution: Creating a fort “embassy” where adults can enter, for a limited period of time, and experience the je ne sais quois that makes couch barricades so irresistible to kids.

In May, Montana Public Radio picked up the show. Now, Jeremy says, he and Rasa receive notes each week from fans who appreciate the light-hearted interlude at a time when news tends to be grim. They’ve opened up the “vexing questions” segment to listeners, and have since tackled some very complicated queries: One fan asked them to find out whether the birthday song has the same tune in every language.

Jeremy attributes the podcast’s success to Rasa, who has an unhesitating voice and a talent for crafting segments off the cuff. “She’s Johnny Carson, I’m Ed McMahon,” he said.

But Rasa said it’s not about who’s better at podcasting. “No matter who’s teaching, you always learn something, and there are these really great things to learn,” she said. “What better person to learn with than my dad?”