Devoted to his friends and Israel, sometimes to a fault  — Zubin Mehta at 84 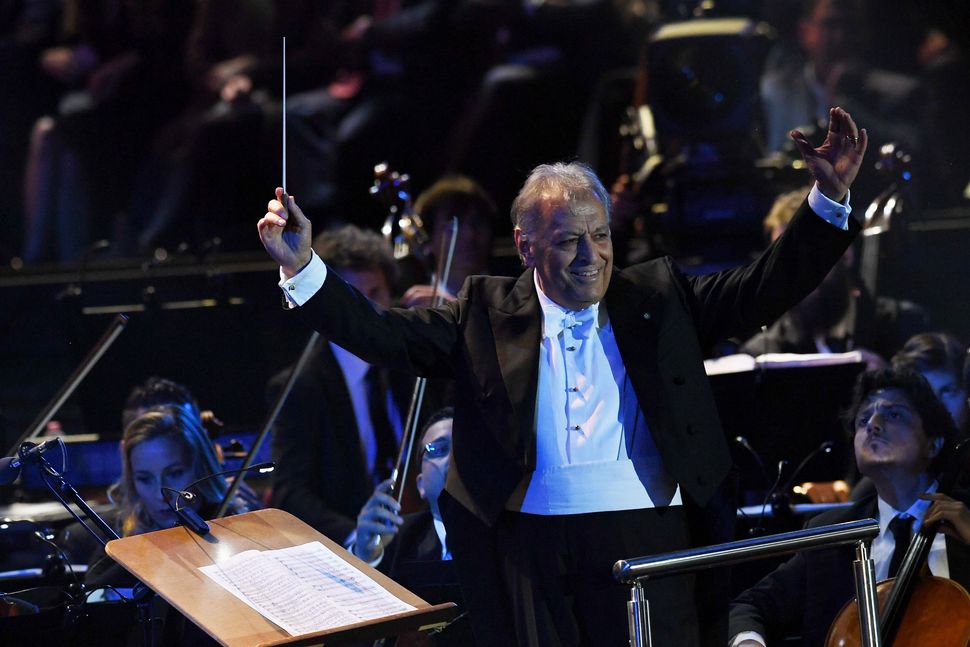 Zubin Mehta’s retirement last autumn after a half-century as musical director of the Israel Philharmonic Orchestra (IPO) was followed by many tributes, including massive CD box sets of his complete Warner recordings, his complete recordings for Decca with the Los Angeles Philharmonic, and complete Columbia albums.

Now 84, Mehta has earned a retrospective look at the sources of his sustained career, significantly associated with his friendship for Israel. Over the years, Mehta proved that embracing Jewish culture is a choice that can lead to a lifetime of sometimes surprising artistic accomplishments.

I well recall visiting the lobby of Jerusalem’s King David Hotel in 1978 where TV sets on the walls blasted a Mehta-conducted, abridged Hebrew language version of Handel’s “Messiah.” A rabbinical council had reportedly authorized it for broadcast if all references to Jesus were deleted.

Some conductors might find a “Messiah” without Jesus pointless, but not Mehta. He was his usual exuberant self on the podium, especially when in Israel. As he describes in an autobiography, his first visit to the Jewish State was to replace the ailing Hungarian Jewish conductor Eugene Ormandy (born Jenő Blau) at a concert.

Enthusiastically, even gleefully, replacing indisposed colleagues became a hallmark of Mehta’s career. This boisterous preparedness could sometimes backfire, as a 2018 memoir by Leonard Bernstein’s assistant implies.

In the late 1980’s, when Bernstein’s health was failing, Mehta appeared on the tarmac of the Pittsburgh airport to “offer any assistance” should Bernstein be unable to conduct that afternoon. The “irritated” Bernstein replied, “I am perfectly capable of conducting my concert.” After Mehta departed, Bernstein “muttered under his breath, ‘What nerve!’”

Nerve was surely an element of Mehta’s success, yet it could not be termed chutzpah (gall, effrontery, presumption plus arrogance) insofar as at his best, Mehta backs up vehemence with genuine skill.

His discography is so vast that even cherry-picking music expressing Yiddishkeit provides a rich harvest. Stick-to-itiveness is another Mehta virtue. In an era of jet-setting independent maestros, Mehta preferred to stay put in music directorships in Los Angeles and New York, even after some critics openly suggested that it might be time to move on.

The IPO’s willingness to award him a music directorship “for life,” which he retained into his eighties, demonstrated solid professional attachment of the kind he was evidently drawn to. Beyond that, an essential mystery persists in Mehta’s predilection for Israel.

Mehta claimed to like disputatious IPO players, in the 1960’s mostly comprising Poles and Middle Europeans, later Russians and more recently, sabras. He also advanced the theory that he empathized with Jews because as a Parsi, a group of followers in India of the Persian prophet Zoroaster, he too belonged to a religious minority that has undergone historical ordeals.

hile that may be true, it is as intangible as Mehta’s standard joke explanation to reporters about why he chose Israel as a professional base. He has jestingly claimed to be a descendant of King Ahaseureus from the Book of Esther, who once ruled over India.

Paradoxically, despite Mehta’s relentless championing of Israeli culture, during 60 years of visiting the country for extended times, he avoided learning to speak Hebrew, apart from a few commonplace phrases. Perhaps retaining an outsider status was seen as advantageous.

Instead, Mehta’s devotion to the Jewish State is based on being drawn to its people, starting with historical figures such as David Ben Gurion, an expert in comparative religion who tutored Mehta about Zoroastrianism, and longtime Jerusalem mayor Teddy Kollek, a former Vienna resident who spoke in local argot from that city with Mehta, who had studied music there.

Ultimately, Mehta’s emotional attachment to Israel may have been based on individuals, akin to the response of the French essayist Michel de Montaigne who, when rationalizing why he was devoted to one specific friend, noted: “I feel that it’s inexpressible, apart from replying, ‘Because it was him; because it was me.’”

Whatever its sources, Mehta’s dedication to Israeli culture and society has been exemplary. His discography does not begin to represent his efforts on behalf of new music in Israel. “Twenty Israeli Composers” lists Mehta’s performances of worthy compositions that are generally overlooked internationally.

Among these are works by Mordecai Seter, born Marc Starominsky in Russia, and Tzvi Avni (born Hermann Jakob Steinke in Germany).

Beyond premiering new music, Mehta has been a constant public presence in Israel during stressful times, before, during, and after wars. His societal impact is exemplified by a 2010 open-air IPO concert conducted near the border with Gaza to show solidarity with IDF soldier Gilad Shalit, who had been taken captive by Hamas terrorists.

Mehta told the international press that he hoped the concert would inspire Gazans to pressure Hamas to allow the Red Cross to visit Shalit for the first time.

While his initiative did not achieve its immediate goal, it demonstrates Mehta’s faith in the social and political power of classical music, even to remedy conflicts in the Middle East.

Other examples include his cofounding of the Buchmann-Mehta School of Music at Tel Aviv University in 2005 as well as Mifneh, a music education program for Israeli Arabs, in 2009.

So manifold have been Mehta’s activities, some requiring personal courage in addition to nerve, that he may have trouble keeping track of them all. Last year he told an interviewer from Israel’s Channel 12 TV news that although koykhes (strength, energy) had kept him going for many years, he regretted never taking the IPO “to any Arab country.”

It may have slipped his mind that in 1982, he did indeed take the IPO across the border into Lebanon, where he led them in a concert attended by Lebanese and Israeli music lovers.

Mehta’s intense sense of social engagement, not just in Israel, motivates his best performances, when a collaborative orchestral role in operas or concertos allows him to shine with conviviality and bonhomie.

More recently, his lifelong musical friendships have appeared to transcend questions about standards of personal comportment set by the #MeToo movement.

Last year he told the Madrid-based newspaper “El Pais” that his “heart is broken by the situation suffered” by his old friend, tenor Plácido Domingo, who resigned as general manager of the Los Angeles Opera in 2019 after multiple accusations of sexual harassment starting in the late 1980s.

In a September 2020 interview with Milan’s “Corriere della Sera” newspaper, Mehta further defended Domingo and conductor James Levine, formally terminated from his longtime affiliations with the Metropolitan Opera in 2018 over sexual misconduct allegations:

“Let’s leave the blacklists to American puritanism. Levine was destroyed by the US media, Domingo forced to leave the Los Angeles Opera, which before him was nothing. All for complaints that arrive thirty years late from failed artists. It really smells of spite.”

While not abandoning friends is an admirable trait, a refusal to see their possible errors may raise unfortunate questions, at least in the minds of some onlookers, about Mehta’s other loyalties.

Devoted to his friends and Israel, sometimes to a fault  — Zubin Mehta at 84