In praise of the yeshiva — and yet something crucial is missing 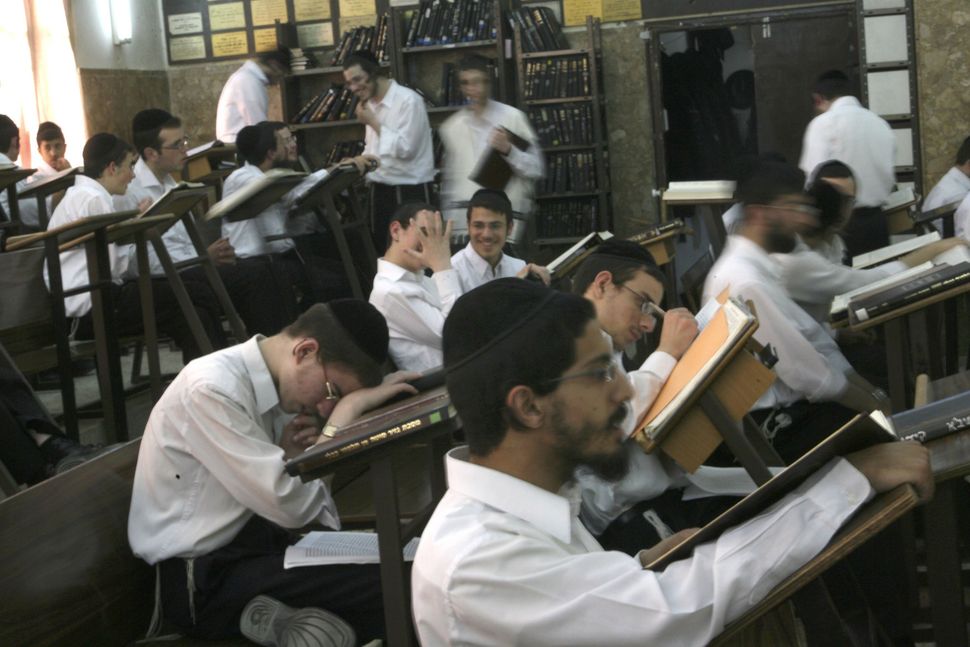 I went to yeshiva for the reason I imagine many men do: because I didn’t want to work. The summer after graduating college, I interned (unpaid) at a newspaper; toward the end, it was intimated that a job working for a columnist might be available. Having spent numerous afternoons listening to this person shout at their assistant, I passed.

My friends all seemed to be thriving: gambling for unfathomable sums on Wall Street, learning to wear tails and recognize good port at English universities, teaching or electioneering for America. Traipsing through humid Manhattan in business casual (my brother’s castoffs), I wallowed in self-pity and sweat. In college, you can fantasize of infinite personal plasticity: You wander into an audition, say, and emerge a thespian. You remake yourself as easily as you apply for a summer travel grant. That flexibility had given way to the sober realities of… something: The economic recession? Adulthood? The professional world? Neoliberal capitalism? I didn’t know quite what was oppressing me, and attempts to narrow things down inconveniently highlighted how little I had to complain about. But I knew I didn’t like it, so I hopped on a plane and left for the lower Galilee, to sit atop a mountain and learn Talmud.

I thought of my choice while reading “Yeshiva Days,” Jonathan Boyarin’s new book about his time in Mesivtha Tifereth Jerusalem, a Lower East Side yeshiva, despite the obvious differences. My yeshiva was religiously liberal, his centrist-Orthodox; mine ardently Zionist, his not particularly so; mine exotic and foreign, his rooted in a neighborhood to which he is deeply attached. I was a disaffected 21-year old, he a middle-aged anthropologist, who has been writing about Ashkenazi Jewish culture and learning for decades. I chose a yeshiva that incorporated historical, academic methods — my major quarrel with the university, after all, was that I had to leave.

By contrast, the learning at Mesivtha Tifereth Jerusalem is apparently untouched by such critical forms of study, and Boyarin sharply distinguishes the university from the house of study. And while my study-house and the attached kibbutz were remote and rural — wildflowers, aromas of turkey feces, residential dormitories, a patchwork of bus-rides and hitchhiking to reach Jerusalem — Boyarin learned in a non-residential yeshiva in crowded, downtown Manhattan, a two minute walk from a Malaysian bakery; Catholic, Pentecostal, and Jehovah’s Witnesses’ churches; a Chinese dance school; and an upscale cocktail bar.

And yet I recognize not only many incidentals from “Yeshiva Days” — the comical attempts to dwell in Orthodox space as someone who isn’t; the study partner (hevruta) who alternates between stand-up comedy and diagnosis of your spiritual woes; the odd importance that unpalatable, packaged junk foods acquire as tokens of affection — but also one of the book’s major contributions: that the yeshiva offers, as he writes, “a space where neoliberal rationality does not hold sway,” where participants are not “profit-maximizing, individual actors.” The yeshiva remains not only a communal, collaborative space, but also one in which the hectic, productive base of economic life gives way to the slow reading of impossibly long books.

Even identifying such a contribution, though, involves interpretive effort and perhaps misprision. “Yeshiva Days” is an understated book, heavy on anecdotes and immediate reflection, with only three pages of notes, most of which are digressive trivia rather than scholarly annotation. In his introduction, Boyarin writes he will practice what anthropologists call “ethnographic refusal,” the idea that the ethical scholar must sometimes withhold information about his subjects. In another chapter, he anxiously describes the extensive process of getting approval from the Rosh Yeshiva (the head of the institution) to write the book. (That is Rabbi Dovid Feinstein, who uniquely appears under his real name: anonymity doesn’t work when your subject has a Wikipedia page.) Though Feinstein seems unbothered, Boyarin worries about betraying the yeshiva to an academy he does not entirely trust.

Perhaps to allay these fears, he writes in a style comprehensible at Mesivtha Tifereth Jerusalem, and he imitates the plain, uncomplicated mode of learning they practice. While other yeshivas engage in the dialectical judo called Brisker “lomdus,” or incorporate the iconoclastic methods of historical philology, the classes here are modest and straightforward. They read the Talmud with its two most classical commentators, they struggle to understand, and if they don’t, they shrug and turn the page. The Talmud praises the sort of scholar who “uproots mountains,” but at Mesivtha Tifereth Jerusalem, the mountains are expected, like everyone else, to follow the rules and stay in their place. In learning, as in their religious lives generally, these men value ehrlichkeit (honesty), disdaining anything perceived as excessive, demonstrative, or showy — even, or especially, excessive piety. Boyarin is certainly an erhlikh ethnographer. The book is as fair-minded and careful as the best judge in small claims court, though it is perhaps similarly unlikely to arouse any overwhelming passions.

This is not to say that “Yeshiva Days” or the men it describes are dull. They are lively and funny, particularly Boyarin’s regular chavruta Nasanel. Nesanel is an ever-flowing spring of words, whether he is passing judgment on Herodotus and Homer, relating a dream about a grandfather who predicted a series of family deaths, or arguing about “Star Trek” with random visitors to the yeshiva. While he explicitly aims to “convert” Boyarin to Orthodoxy, he admits that transformation is a secondary goal: The real point is just to learn together. This is a somewhat paradoxical example of the rabbinic idea of “torah leshma” — usually translated as “learning for its own sake.” Leshma is often opposed to pecuniary or egoistic motivations, yet in this yeshiva, it also trumps the purposes that ostensibly motivate study. The main point isn’t that Boyarin evolve religiously, or that the students cover a certain amount of material, and it is certainly not to decide the law. Rather, the purpose is the activity itself, so that at times, I felt I was reading, “Zen and the Art of Rabbinic Exegesis.”

Such learning, defined as it is by its stubborn refusal to be well-motivated, cannot help but be countercultural. And indeed, “Yeshiva Days” is framed by an overdetermined sense that Mesivtha Tifereth Jerusalem is an endangered habitat. Real-estate patterns are pushing these Jews out of the Lower East Side, and as Orthodoxy slides rightward, the yeshiva’s uncompromising but not unfriendly attitude toward secular modernity starts to feel itself outdated. Even Boyarin’s dedication, to the Jews of Telz… martyred” in the Holocaust evokes the possibility of loss. He repeatedly flirts with the possibility of committing more fully to the yeshiva — spending his retirement studying there, say, or studying for rabbinical ordination. Yet he holds himself in reserve, since the yeshiva remains alluring partly because it is different, offers a counterpoint to everyday life, and remains alien: “When I’m here I miss there… there’s always an element of longing for something I don’t have at the moment.”

Although “Yeshiva Days” documents a local community (many of whose members have ties to the Lower East Side stretch back several generation), that highly concrete, earthy place is constantly about to be absent, in the process of being lost, is seen through the shadow of absence. Where a strand of the Yiddish left celebrates doykeit (hereness), an ideal of rejecting far-off homelands for this-worldly politics, Boyarin seems more interested in golus, or exile, a diasporic condition defined by a constitutive lack.

That said, there is one painful lack in this otherwise wonderful book: gender. Though Boyarin mentions that this yeshiva exclusively admits men and admits that this fact will bother some readers, he says nothing further on this point. It is, it seems, what it is. (Readers looking to complement this book might be interested in Ilana Blumberg’s memoir, “Houses of Study: A Jewish Woman Among Books,” which is about a very different branch of Orthodoxy but nonetheless pairs well with “Yeshiva Days.”) I recognize the omission, for it has been mine. I remember visiting Jerusalem late in my year at yeshiva, proud of the spoken Hebrew I’d acquired, only to discover, while talking with an Israeli woman, that I remained completely flummoxed by verbs conjugated in the second-person singular feminine — they hadn’t come up.

It is hard to know what would change in Boyarin’s books if the subject of women did come up. Part of the book’s modesty, after all, is that it largely restricts itself to yeshiva days, mostly ignoring what happens at night, when the men go home. But I suspect that some of the romanticization of the yeshiva — particularly the sense that the inefficient and meandering mode of learning represents a sharp alternative to the neoliberal demands of the workplace — would have to be reconsidered. After all, for the men to play with the Talmud, someone has to work. Once learning “leshma” was contextualized in a world of work, family life, and so on, would it still seem like an alternative to late capitalism, or merely one of its more exotic forms of leisure-time consumption? (Burning Man too looks like cooperative, egalitarian utopia — until you remember how much it costs.) To be clear: I certainly hope there are critiques of neoliberal individualism to be found in traditional religious communities. That’s part of why I myself learn and teach Talmud. But my own experience with yeshiva tells me that unless we pay attention to who is excluded, we can never clearly distinguish radical critique from mere escapism.

In praise of the yeshiva — and yet something crucial is missing