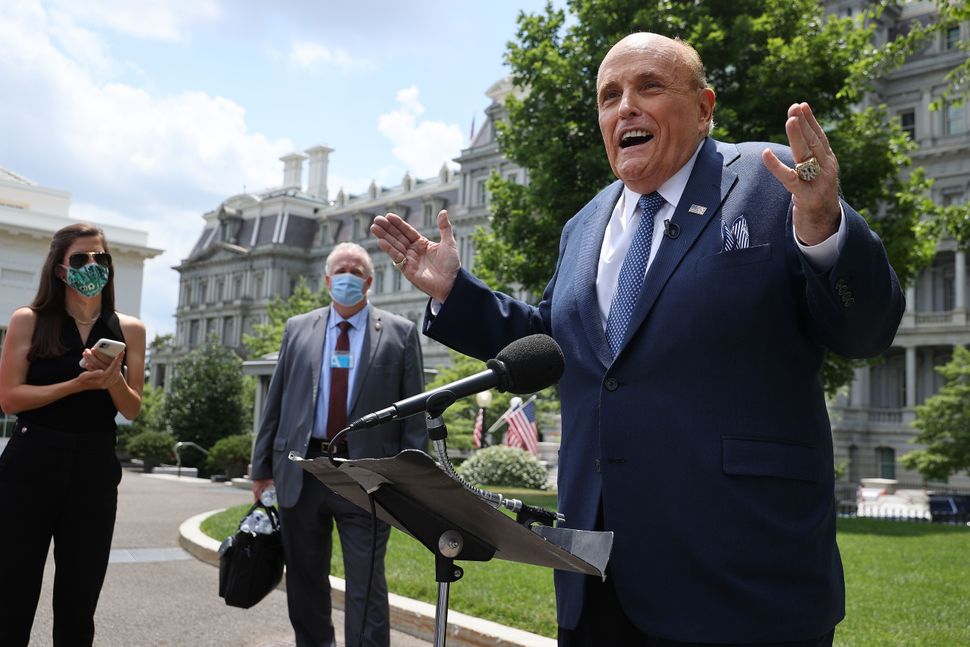 Rudy Giuliani has a new champion in his latest scandal: His name-a Borat.

Thursday night, shortly before the final presidential debate and the early release of “Borat Subsequent Moviefilm,” Kazakh journalist Borat Sagdiyev posted a video on his Twitter to defend Giuliani against claims of impropriety arising from a scene in the “Borat” sequel.

“What was an innocent sexytime encounter between a consenting man and my 15-year-old daughter have been turned into something disgusting by fake news media,” Sagdiyev says in the video, pulling the air before his nose when he says “media,” a reference to either Pinnochio or, more likely, Jews.

In the scene, which Giuliani has decried on Twitter as a “complete fabrication” and, on his radio show Wednesday, as a “hit job,” the former mayor of New York accompanies Sagdiyev’s daughter, Tutar (actress Maria Bakalova — who is actually 24), to her hotel suite for a drink following an obsequious interview where Tutar appears starstruck.

Once in the room, Giuliani asks Tutar for her phone number and address. After she undoes his lavalier mic (during which he pats her side), Giuliani sinks into the bed. A hidden camera then cuts to Giuliani’s reflection in a mirror. Ominous music swells while he digs around beneath his waistband, but Sagdiyev interrupts before we see what would come next.

Giuliani claims he was tucking in his shirt. I gotta say, I’ve reviewed this footage like the Zapruder film, and couldn’t see anything to contradict that claim, though it’s certainly edited and scored in a way that suggests the worst.

I won’t give too much away about the film, except to say that Sagdiyev’s late defense of Giuliani is something of a reversal.

Giuliani, who for some reason identified Sagdiyev as actor Sacha Baron Cohen (“The Spy,” “Trial of the Chicago 7”) in July, immediately after his encounter with Tutar, claims that the footage in the film is an attempt to pull focus from his investigation of Hunter Biden’s “laptop from hell” discovered at a Delaware computer shop. The computer supposedly contains some damning materials (no major news outlet has yet been able to verify if the computer even belongs to Biden).

At press time, it’s unclear if Giuliani will welcome Sagdiyev apologia, but the reporter had strong words for those attempting to distort the true nature of Giuliani’s actions.

“I warn you, anyone else try this and Rudolph will not hesitate to reach into his legal briefs and whip out his subpoenas.”

A clue as to how Tutar gained an audience with Giuliani has since appeared. A video posted to Sagdiyev’s page this afternoon shows that his daughter successfully infiltrated the pro-Trump One America News Network.

Trump very careful who he let into his events and house. No Covid test necessary – High 5! pic.twitter.com/Kf5gGk3n2M

“OAN is most rigorous news source in America,” Sagidiyev says over the video, which shows a gaggle of unmasked White House guests and Tutar rubbing elbows with Donald Trump, Jr. “I know this because they take my daughter into the White House — no need for security checks or COVID test! They boring!”