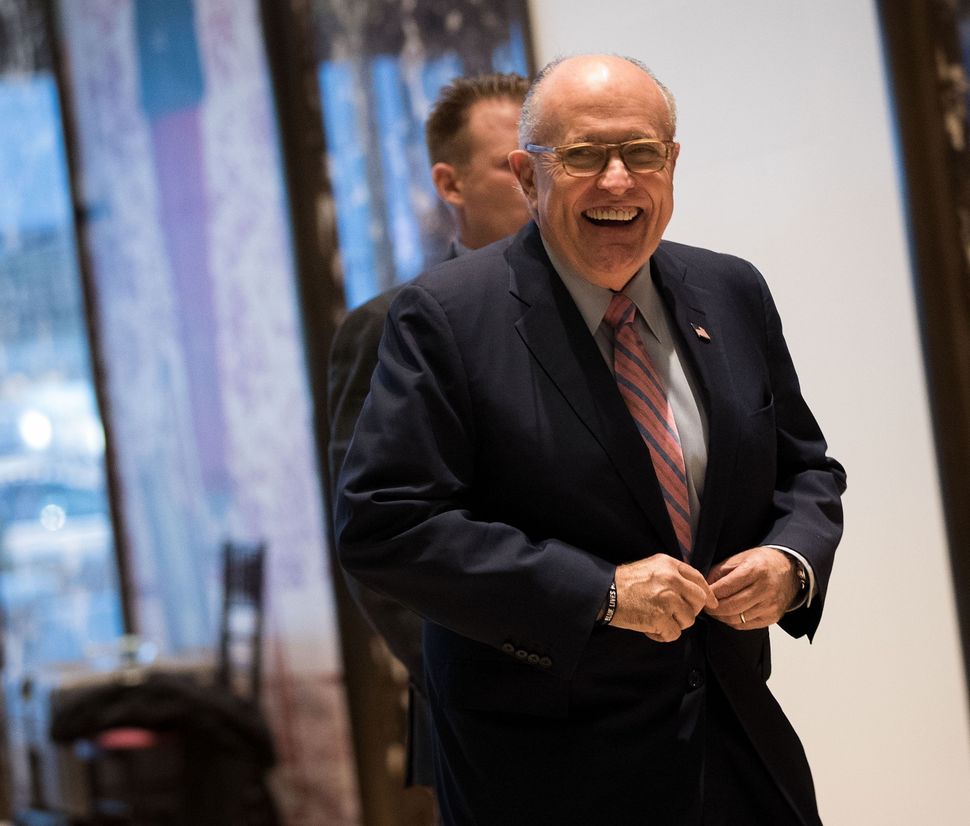 When he’s not crusading against Facebook, Sacha Baron Cohen appears to be busy working on a new season of his Showtime series “Who Is America?”

His latest mark? America’s Mayor, Rudy Giuliani, whom Baron Cohen surprised in a lace bathing suit, prompting Giuliani to alert the police. Giuliani said he didn’t know it was Baron Cohen until later, but believes he escaped from his prank unscathed.

We’re not so sure.

The encounter happened on July 7, when Giuliani went to the Mark Hotel in Manhattan to sit for a prearranged interview about the Trump administration’s response to the coronavirus pandemic. The former New York mayor said he was offered payment for his time, which he said would go to a Staten Island charity called the Stephen Siller Tunnel to Towers Foundation.

After he’d been sitting down for a few minutes with an interviewer, Giuliani recounted to Page Six, “This guy comes running in, wearing a crazy, what I would say was a pink transgender outfit.”

Giuliani might be alone in calling it that. An outfit has no gender, and therefore, cannot be trans. Additionally, trans people do not wear uniforms. It appears that Giuliani might have been trying to say that he thought Baron Cohen was a trans person, but instead said something horribly transphobic, not to mention peculiar.

There’s also the possibility Giuliani meant to say that Cohen had dressed in drag — something he himself did in 2000 with his buddy and current client Donald Trump — and forgot the word, or believed it was no longer politically correct. But who can really know Rudy’s heart?

But, on to Baron Cohen’s outfit: Giuliani said that the person who interrupted his interview was dressed in a “pink bikini, with lace, underneath a translucent mesh top, it looked absurd. He had the beard, bare legs, and wasn’t what I would call distractingly attractive.”

Giuliani didn’t clock that it was Baron Cohen, whom he said was “yelling and screaming,” and thought that his intrusion was some kind of “scam” or “shake-down.” So, Giuliani responded as you might expect a man who built his reputation as a “tough on crime” mayor to and rang the NYPD, at which point, Baron Cohen fled the scene.

Observers told Page Six they saw Baron Cohen “sprinting” out of the hotel and down East 77th Street in a bathrobe, but didn’t see any cops on his trail. When Giuliani later realized who his bikini-clad gate-crasher was, he said “I thought about all the people he previously fooled and I felt good about myself because he didn’t get me.”

But didn’t he, though? Isn’t getting Giuliani to go on record referring to someone’s garb as a “pink transgender outfit” enough for Baron Cohen to say “mission accomplished?”

While Giuliani may not like what he sees if his interaction with Baron Cohen ever reaches airwaves, for now, he counts himself a fan.

“I am a fan of some of his movies, ‘Borat’ in particular, because I’ve been to Kazakhstan,” Giuliani said, before breaking out his best Borat imitation. “‘She is my sister. She is number four prostitute in all of Kazakhstan,’” he quotes. “That was pretty funny.”