Roy Moore: I’m Glad To Be Duped By Sasha Baron Cohen, That’s How Much I Love Israel 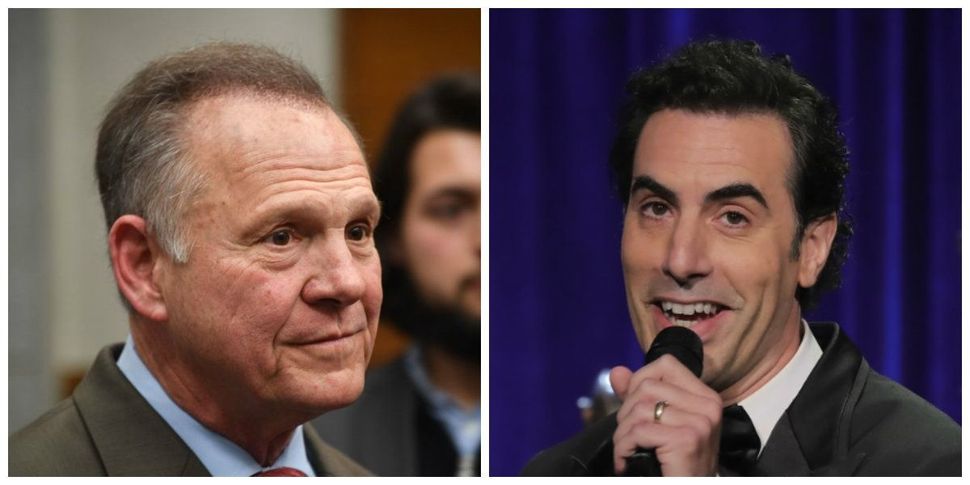 Say what you will about trickster comedian Sacha Baron Cohen, but aren’t you glad that it was he who brought Roy Moore’s name back into the news and not, say, a 13-year-old?

Disgraced Alabama judge Roy Moore has issued a defiant statement explaining that he attended what he believed to be a conference honoring Israel’s 70th birthday which was actually an elaborate set up by comedian Sacha Baron Cohen for his new “Who Is America?” with Showtime, set to air this Sunday. The faux-conference, which also lured former-congressman Joe Walsh and likely others, took place in Washington, DC in February.

Moore said the gambit worked to “embarrass, humiliate, and mock” him and Israel, though Moore, who lost the 2017 special election in Alabama after nine women accused him of sexual assault, tends to have that kind of thing under control.

Moore ended his statement by threatening legal action against the Showtime network, and alluding to a more direct uprising: “It’s been a long time since I fought for my country in Vietnam,” he wrote. “I’m ready to defend her again.

The question remains: Will Baron Cohen’s newest venture into audacious mockumentary turn a mirror on the absurdity of conservative politics? Or will it merely alienate Americans who dislike foreign elites like Baron Cohen and think Israel and disabled veterans are no laughing matter?

And then, of course, there’s this:

We need to brace ourselves for the very real possibility that Sacha Baron Cohen held a fake pro-Israel conference in DC and tricked dozens of conservative luminaries into singing a fake Israeli national anthem https://t.co/QUDQ2HeHao

Roy Moore: I’m Glad To Be Duped By Sasha Baron Cohen, That’s How Much I Love Israel